We’ve been exploring my Alsatian heritage rather extensively in recent weeks.  (See blog posts here, here, here, and here.)  While reviewing one last time all the parish and civil vital records for Dannemarie, France, I discovered an intriguing record I had missed earlier.

Background:  My 4GGs Rosalie Rist (1801-1890) and Lorentz Wührlin (1796-1870) were married in 1823 in the town of Dannemarie in Alsace, France.[1]Dannemarie, Haut-Rhin, Alsace, France, “Etat-civil de 1797 à 1862,” mariages (weddings), Laurent Wührlin and Marie Rosine dite Rosalie Rist, 30 Dec 1823, p. 183-184, no. 11.  He was 27, she was 22.  They immigrated to America in 1827, after which their names eventually changed to Lawrence & Rose Whaley.  The progression of Lorentz’s given name is worth chronicling: Lorentz is the German form and is recorded only in his 1796 birth record; all Alsatian records after that show the name as Laurent, the French form; in America, he first used Laurence, then after about 20 years, fully Americanized it to Lawrence.

Dannemarie is in the traditional region of Sundgau in southern Alsace, a Catholic stronghold.  The featured image above displays traditional costumes from various parts of Alsace.  The young lady third from the left and holding the little girl’s hand is wearing Sundgau attire.

Discovery:  Almost a year and a half before her marriage to Lorentz Wührlin, Rosalie gave birth to an illegitimate child that was declared stillborn.[2]Dannemarie, Haut-Rhin, Alsace, France, “Etat-civil de 1796 à 1862,” décès (deaths), Jean Rist, stillborn, illegitimate, s. of Rosine Rist, 31 July 1822, p. 150-151.  She was 20 years old.  She named her stillborn infant Jean Rist (Johann in German).

Dannemarie Health Officer (Antoine) Rist, age 68, and Jacques Zimmerman, a young policeman in Dannemarie, age 30, appeared at our office to report that yesterday at 6:00 in the morning Rosine Rist, daughter of the primary declarant and Anne Marie Baumann, had a child that was stillborn, occurring at the home of the father at No. 129 Rue D’Altkirch.  The illegitimate child was given the name Jean Rist.

The father of the child is not named, unfortunately, nor can we tell what circumstances caused the pregnancy.  A lot of questions run through one’s mind.  Was the child the result of a consensual or non-consensual relationship?  If consensual, why did she and the father not get married?  I find it a little suspicious that the child was born dead, especially when her own father was the local doctor.  These are unanswerable questions, most likely.  It is even conceivable, I suppose, that Lorentz himself was the father of the stillborn but Rosalie’s father had some objection to him at that point, then later relented when it was clear that they were not going to give up their love.  I’m probably opting for the most romantic possibility with that surmise! 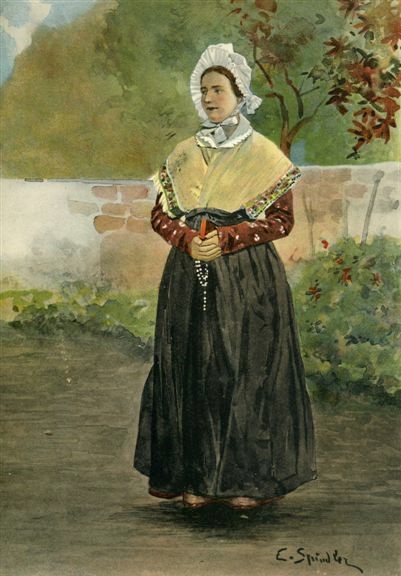 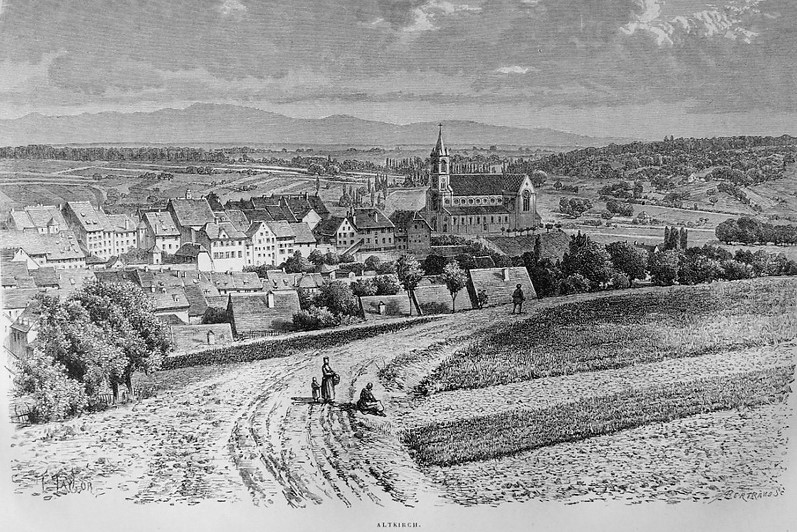 The Rue D’Altkirch no longer exists in Dannemarie so it is hard to pinpoint where this might have been.  It was probably on the east side of town because Altkirch is a town 7 miles due east of Dannemarie.  (Altkirch is the historic capital of Sundgau.)  It may have even been the main road headed east out of town, now known as Highway D419.  Assuming that odd-even house numbering sequences were the same back then, Laurent & Rosalie’s house would have been on the north side and Antoine & Anne Marie Rist’s house on the south side of Rue D’Altkirch.

As mentioned before, Lorentz/Laurent was a baker (boulanger).  Now that we know his address in Dannemarie and can see how it may have been located on the main street going east-west through town, I wonder if he was working out of a bakery on the ground level of his own home.  On the other hand, he was just 31 when they left for America in 1827, so it is also possible that he was working at a bakery owned by someone else.  That’s probably more likely.  If he owned his own shop, the chances of emigration are less. 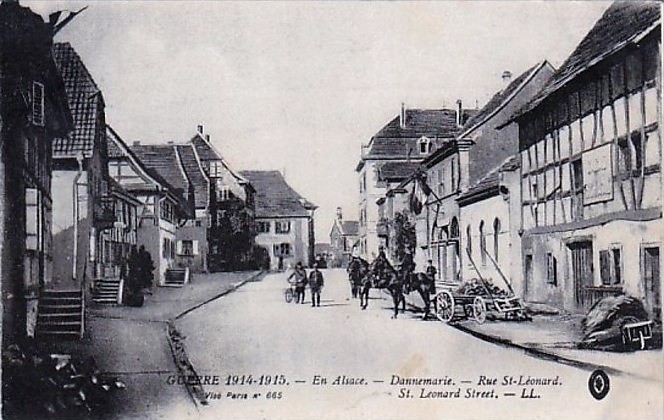 I stumbled across another illegitimate child record affecting the family.  Laurent’s older sister, Marie Anne Wührlin, gave birth to an illegitimate daughter named Madeleine Constance Wührlin on 19 November 1825.[6]Dannemarie, Haut-Rhin, Alsace, France, “Etat-civil de 1796 à 1862,” naissances (births), Madeleine Constance Wührlin, illegitimate, d. of Marie Anne Wührlin, 19 November 1825, p. 223.  This occurred in Dannemarie, not in her hometown of Hartmannswiller, so she must have traveled to her brother’s place to give birth – maybe because her parents kicked her out.  The address given for her brother  is 126 Rue D’Altkirch.

Local resident, Laurent Wührlin, a baker aged 30, appeared before us to report that at 10:00 in the morning yesterday, his sister Miss Marie Anne Wührlin, a cook aged 34, originally from Hartmannswiller, eldest daughter of Antoine Wührlin, shoemaker in Hartmannswiller, and Ursule Hirtz, now deceased, gave birth to an illegitimate female child named Madeleine Constance Wührlin.  The child was born at the home of the declarant, No. 126 Rue D’Altkirch.

I don’t know what happened to Laurent’s sister Marie Anne Wührlin or her daughter Madeleine Constance.  I scanned the marriage and death records in Dannemarie and Hartmannswiller up through 1840 but didn’t find a mention of either of them.  Marie Anne possibly married someone from another jurisdiction or moved elsewhere.  She could have also abandoned the infant at the door of a convent or church.  The life of an unwed mother was not pretty in olden days and we can well imagine the social ostracization.

So here’s a timeline of the known events in Laurent & Rosalie’s life prior to emigration: