In my previous post, I revealed a major discovery about my Whaley-Rist ancestry, which is up-line from my Miller ancestors.  I found the marriage record for 4GGs Lawrence Whaley (1796-1870) and Rose Whaley (1801-1890) in the French civil registration book for the department of Haut-Rhin (Department 68) in France.  They were born Laurent Wührlin and Marie Rosine Rist (called “Rosalie”).  They immigrated to America about 1828 with at least one young child in tow, their son Robert.  The rest of the children were born in Princeton, New Jersey.

As promised, I had the marriage record translated.  I submitted it to the France Genealogy Community Board on FamilySearch and received a translation very quickly from Paul-Marc Heudre.  Thanks, Paul-Marc Heudre!

Basically, the information I provided previously was correct.  Laurent Wührlin and Marie Rosine Rist dite “Rosalie” were married on 30 December 1823 in Dannemarie, Haut-Rhin, Alsace, France.  Dannemarie was the hometown of the bride; the groom was from Hartmannswiller, about 20 miles north.  He was 27 and was born 19 June 1796.  She was 22 and was born 30 June 1801.  Laurent was a baker.  The couple made their home in Dannemarie.

Those present at the wedding included:

Here are Laurent and Rosalie’s signatures on the marriage certificate:

I had previously guessed that Antoine Rist was an equestrian cavalry officer but that was wrong.  He was a health officer (officier de santé).  I must have gotten carried away with my rudimentary French … well, actually Google Translate led me astray.

So I asked Paul-Marc Heudre what “health officer” meant and he explained it was actually a type of medical practitioner.  Between 1803 and 1892, France had two levels of medical professionals: those that had a degree and could call themselves doctors or surgeons and those that had no degree, could not refer to themselves as “doctors,” but were still validated within their departments to perform some medical services.   These were the so-called “health officers.”

Prior to the French Revolution, such vital records were kept by the churches, so one has to look in parish records before 1793.  Unfortunately, the parish records for Dannemarie and Hartmannswiller are not available online.  It’s a good excuse to reschedule our trip to Europe so I can visit the archives in Colmar! 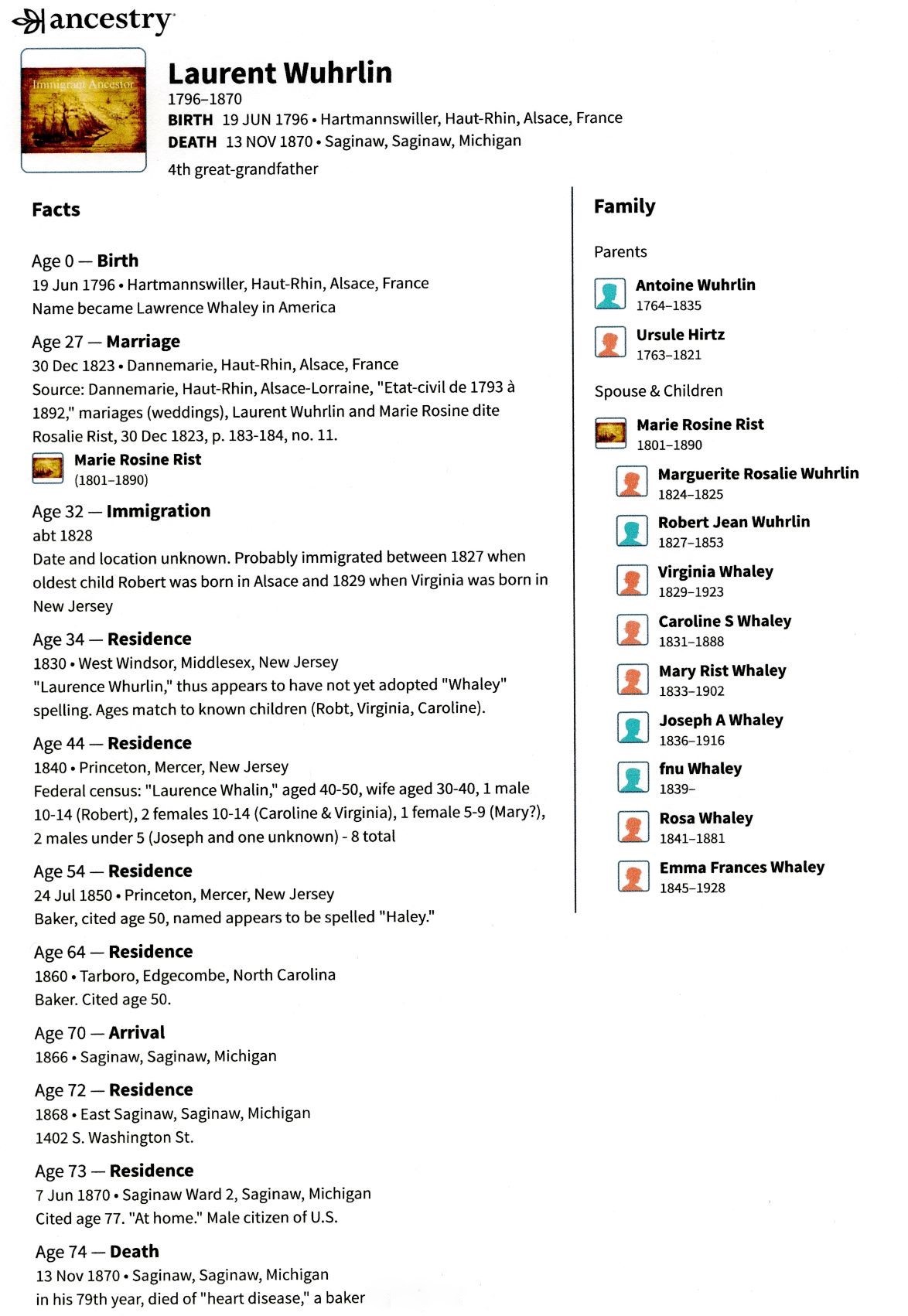 Discovering that the Whaleys were known in the old country by the surname Wührlin also makes sense because of how they were described in the 1830 U.S. census.  In a previous blog post here, I spoke about how difficult it was to find Lawrence and Rose Whaley in early census enumerations.  The 1830 federal census, their first in America, has them listed under the surname Whenlen.[10]1830 U.S. census, Middlesex County, New Jersey, population schedule, town of West Windsor, p. 311, Lawrence Whenlen; digital image, Ancestry.com (https://www.ancestry.com : accessed 27 March 2019), … Continue reading  At least, that’s the spelling provided by the transcriber.  You can look at it yourself below, but I think the spelling is actually Whurlin!  By the 1840 census, they were referred to by the surname Whalin, clearly spelled.[11]1840 U.S. census, Mercer County, New Jersey, population schedule, town of Princeton, p. 42, image 90, Laurence Whalin; digital image, Ancestry.com (https://www.ancestry.com : accessed 27 March … Continue reading  In other words, it would appear that the transition from Wührlin to Whaley was not sudden but gradual.

The upshot of all this research is that we now have four new ancestors added to the family tree, as shown in the featured image at the top of the post.  (The new ones are highlighted in green.)  Although I haven’t looked at pre-1793 records yet, I did notice a genealogy submitted to FamilySearch that documents many generations of Würhlins in Hartmannswiller.[12]“Pedigree Resource File,” database, FamilySearch (https://familysearch.org : accessed 15 March 2020), entry for antoine WUHRLIN; “ascendance filles” file 2:2:2:MMXD-D2L.  I won’t add them to the tree until they’re confirmed, but it looks legitimate.  The amazing thing is that the Wührlin line in that genealogy goes back to 1596!  If accurate, it means our Wührlin/Whaley ancestors were settled in Hartmannswiller, a small Alsatian village, for over 230 years!

It often happens like this – when you finally break through a genealogical brick wall, you really break through and explosively discover new ancestors.  In our case, we’ve pushed back our Whaley and Rist lines to the 5GG level (7 generations), added two new surnames to the tree, Hirtz and Baumann, and are on the verge of adding many new Alsatian ancestors from the 18th and even 17th centuries.

I would point out that in AncestryDNA, I have nine genetic matches ranging from 10 to 24 centimorgans who appear to match me because of common descendancy from the Whaley-Rist ancestors.  One cousin at 24 cMs is a known 3C2R, another at 10.1 cM is a known 4C1R, and another at 10 cM is a known 6C.  This could indicate that the genealogical connection to these Alsatian ancestors is also a genetic connection.

The other cool thing about the discovery is that Rosalie Rist had 2 brothers, Jean and Joseph, who were both musicians, so this could be another explanation for some of the musical talent in the family.  My mother was a talented oboist and pianist and I have two nephews who are professional jazz musicians.  We know that Mom’s Vermilyea line had a lot of musical talent, but maybe some of it also came from her Alsatian ancestors, specifically the Rist family.

My Alsatian Ancestors Crossed the Atlantic in 1827
Scroll to top