In prepping for the Europe trip we’re probably not going on, I started reviewing the information I had collected in the past about my Alsatian ancestors.  In doing so, I made a major discovery!  I found the original French marriage record in 1823 for Laurent Wührlin (1796-1870) and Rosalie Rist (1801-1890), my 4th great-grandparents.[1]Dannemarie, Haut-Rhin, Alsace-Lorraine, “Etat-civil de 1793 à 1892,” mariages (weddings), Laurent Wührlin and Marie Rosine dite Rosalie Rist, 30 Dec 1823, p. 183-184, no. 11.  It reveals their wedding date, their birth dates and hometowns, and their parents names.  This is the first time I’ve encountered a primary record from their life before immigration to America.  Awesome!

Background:  My mitochondrial (mtDNA) line includes 3GG Caroline S. Whaley, born in Princeton, New Jersey in 1831.  She married German immigrant Charles C. Miller in 1850.  They moved as a young couple to Saginaw, Michigan in 1853, where they remained until their deaths in the 1880s.

Caroline’s parents are the subjects of this post: Lawrence & Rose Whaley.  They were married as Laurent Wührlin and Rosalie Rist in the historic French region of Alsace-Lorraine and emigrated around 1826-1828, settling in West Windsor, Mercer, New Jersey (now Princeton).  At least one child, Robert, was born in France, but most of the children were born in New Jersey.[2]1850 U.S. Census, Mercer County, New Jersey, population schedule, township of Princeton, p. 5A, dwelling 54, family 59, Lawrence Haley household; digital image, Ancestry.com (https://www.ancestry.com … Continue reading  They had seven who lived to adulthood.  For some reason, Lawrence & Rose moved to North Carolina about 1858-1860, along with four of their children (but not Caroline).[3]1860 U.S. Census, Edgecombe County, North Carolina, population schedule, Tarboro, p. 173, dwelling 1503, family 1412, Lawrence Whaley household; digital image, FamilySearch (https://familysearch.org … Continue reading  This proved a mistake because the Civil War broke out in 1861 and the family reportedly suffered greatly during the war years.  Once the war ended, they migrated north to Saginaw, Michigan where their daughters, Mrs. Caroline Miller and Mrs. Virginia Friedeborn were then living.  Lawrence died in 1870 in Saginaw, age 74, and Rosie died at the ripe old age of 89 in Clare, Michigan.

Lawrence, by the way, was a baker.  I love that!  Having a French baker in one’s ancestry is very heart-warming somehow.

Discoveries:  Up until today, I had never known the parentage of either Lawrence or Rose, nor had I found any immigration or naturalization record.  The family has been mostly constructed through the use of vital and census records in the United States.

Rosie’s obituaries all state that she was of “German parentage.”  This makes sense because Alsatians as a group are, or at least were, culturally and linguistically German.  The history of Alsace, of course, is complicated as ownership has passed back and forth between France and Germany several times.  During the time Lawrence and Rosalie grew up, it was under the control of the French Republic.

Here are some maps to demonstrate the locations involved.  Today, the traditional territory of Alsace has been divided into two states, or departments as the French call them: Haut-Bas and Haut-Rhin.  They are designated departments 67 and 68, respectively.  In the first map below, you can view their location, tucked into a corner in the far eastern pocket of France next to Germany and Switzerland.  Lawrence & Rose’s origins are in Haut-Rhin. 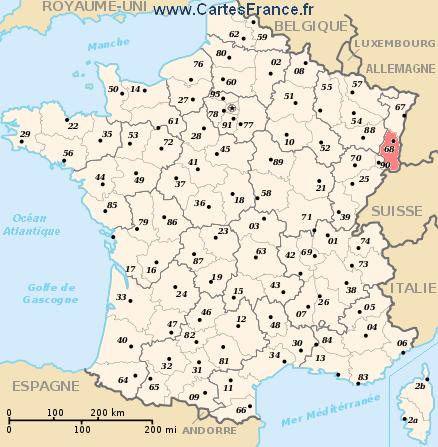 The second map shows a closer view of Haut-Rhin with the capital Colmar in the north and the largest city, Mulhouse, in the south.  The town of Belfort is just to the west and was part of Alsace during much of the 19th century. 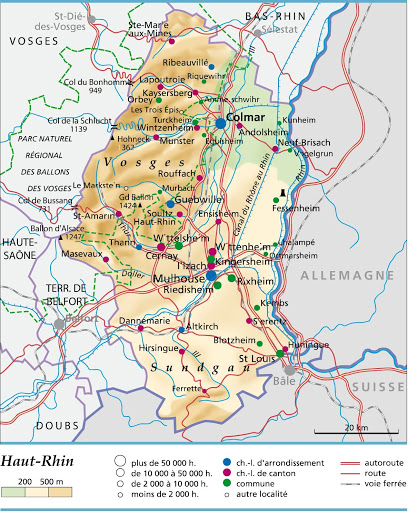 Colmar is a famous tourist destination because of its canals and because the town was not noticeably bombed during World War II and has retained many medieval buildings.

Note the village of Dannemarie on this map.  It’s in the south, just east of Belfort and west of Altkirch.  This is where Lawrence and Rose were married.  The marriage record itself is quite remarkable.  I’ve never seen one with so much information.  Unfortunately, I can’t read all of it.  My high school French is not much to rely on.

What I can read though is that Laurent Wührlin, born 19 June 1796, age 27, a baker (!) from Hartmannswiller, married Marie Rosena Rist dite Rosalie, born 30 June 1801, age 22, a native of Dannemarie.  Laurent’s father is identified as Antoine Wührlin, a farmer and shoemaker, in Hartmannswiller.  I can’t be sure but it looks like Laurent’s mother may be Ursula Hirtz.  Rosalie’s parents are identified as Antoine Rist, possibly an officer of some sort (equestrian cavalry officer?), and Marie Baumann.  They lived in Dannemarie where the wedding was held.

I will get the record translated and should have more to report later.  Now that I know their original names and have the specific locations, I can begin to search for other vital records in the French civil archives.  I feel like I just found the key to a large vault that I have been trying to get into for a very long time!

The Hartmannswiller location is completely new.  It’s a small village so you can’t see it on the map above but it is located just west of Ensisheim, about 20 miles north of Dannemarie.  Here’s a good image I found online of its historic fortified cemetery. 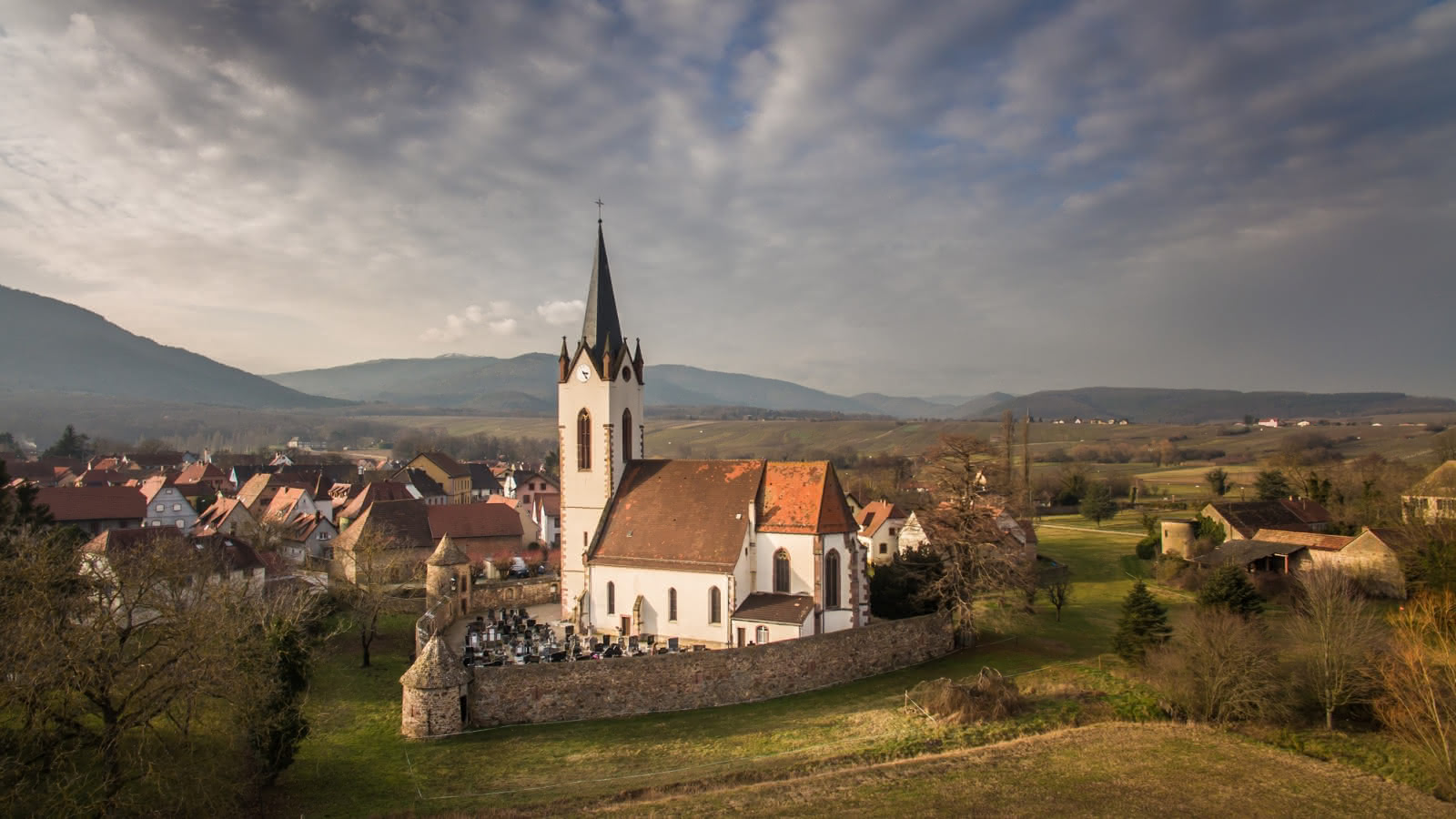 How I found the marriage record is pretty funny.  French Republic civil records go back to 1793 and are available online.  But there’s no search engine so it is time-consuming trying to find anything.  Several years ago I consumed several hours browsing the marriage records for the city of Colmar trying to find Lawrence & Rose, without success.  Then, just this week, I remembered that a couple public trees had listed Rosalie’s birth place as Dannemarie (or Dammerkirch in German).  There was no sourcing for that assertion so I didn’t know if it was accurate.   I thought, well, let me look real quickly for marriages in the canton of Dannemarie just in case.  I focused on the mid-1820s and … Voila!  There it was.

One of the more meaningful aspects of this discovery is that it pushes my mtDNA line back one further generation.  Mitochondrial DNA allows us to track our pure maternal line, from mother to mother to mother, ad infinitum.  I have reported to DNA testing companies that my earliest known mtDNA ancestor was Rosalie Rist.  Now I can change that to her mother, Marie Baumann.  Here’s the full mtDNA line, bearing Haplotype H7b4, from my mother going back in time.

I will have to flesh out the information about Marie Baumann to obtain her birth and death data, along with all of these new direct ancestors in Alsace.