In a 2018 post, I detailed the case for Henry King as the father of 3GG Stephen W. King (1824-1865).  See it here.  The conclusion was that Henry was a good candidate, but more evidence was required to be sure of the relationship.  The analysis was based primarily on federal census records and a suggestive 1816 marriage record in Portage County, Ohio.[1]“Ohio, County Marriages, 1789-2013,” database with images, FamilySearch (https://familysearch.org : accessed 12 March 2018), Henry King and Jane Dunlap, 10 September 1816, Portage County, Ohio, … Continue reading

Well, last week, thanks to the efforts of the Oakland County Pioneer and Historical Society of Michigan, a new piece of evidence was found.   It’s Henry’s burial record.  See his gravestone in the cemetery photograph above (on the left).  It allows us for the first time to affirmatively place Henry King in Milford, Michigan in the 1840s, where we know Stephen W. King lived as a young man.  Kudos to Michael McGuinness, Executive Director, and staff researchers Barb Hofman and Dave Decker for a job well done!

Background:   My King and Miller lines meet in Saginaw, Michigan where 2GGs Fred A. King (1857-1920) and Caroline S. “Lena” Miller (1860-1932) married in 1879.  My mother and grandmother were well aware of the Saginaw connection.  Mom and Aunt Susie and I often talked about taking a road trip to Saginaw to conduct research, but it never happened, unfortunately.  The King line beyond Fred was a complete mystery to us.

Then, four years ago, I established that Stephen W. King was Fred A. King’s father.[2]Fred A. King’s parentage and life history are described in three 2016 articles in the Minnesota Genealogist, which can be accessed here.  We learned that Stephen was born in Ohio in 1824 but migrated to Michigan around 1844 with his parents and at least three sisters: Almira, Mary, and Helen.  All four siblings are evident in the 1850 U.S. Census, residing in Milford, Oakland, Michigan.

The pedigree chart below shows my great-grandmother Mabel Alicia King (1885-1938) and her King ancestry.  Henry King and wife Jane are the highlighted ancestors. 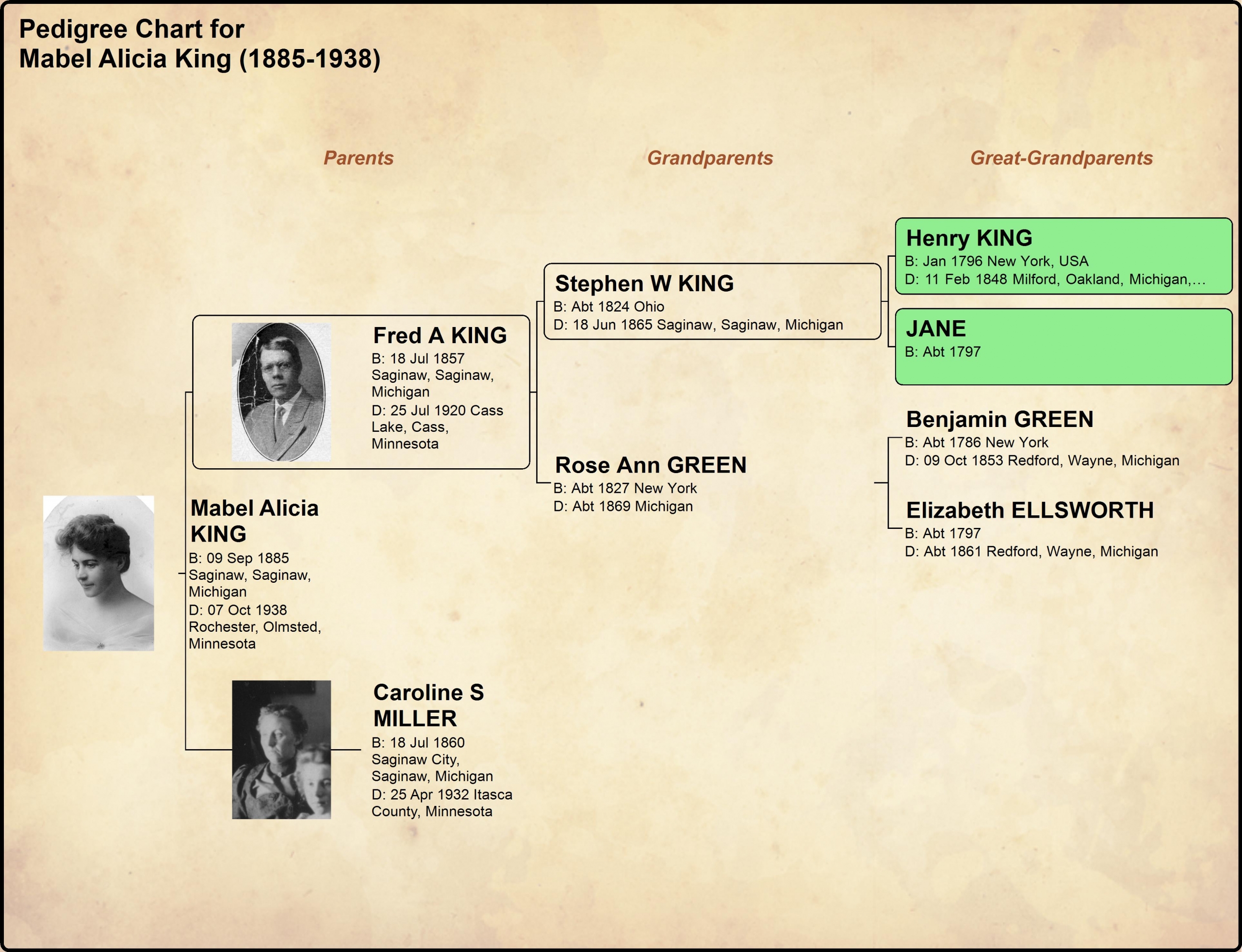 If I had stopped to think about it, however, I would have realized that Milford did not exist in 1818 and that a gravestone that old was impossible.  It’s another example of my pace of research sometimes being too fast. 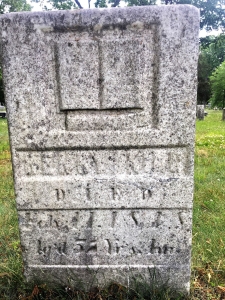 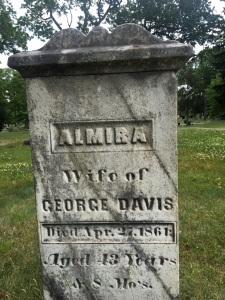 The Oakland County Pioneer and Historical Society solved the riddle.  They discovered that the Henry King headstone is actually dated 1848, not 1818!  See the image above.  The stone is worn down and pretty hard to read, which likely explains the dating error on Findagrave.  The inscription reads:

This fits our timeline perfectly.  I had predicted that Henry King died between 1844, when the family reportedly moved to Milford from Ohio,[7]“Old Resident Dead: Mrs. Helen L. Terry Died at the Home of her Son, H.K. Terry, This Afternoon,” obituary, Saginaw News, 18 August 1903, p. 9, col. 2; digital … Continue reading and 1850, when he is absent from the U.S. federal census AND his two teenage daughters, Mary and Helen, are living with their married older sister Almira Davis.[8]1850 U.S. Census, Oakland County, Michigan, population schedule, Milford Township, family 1537, Helen King and Mary King in household of George Davis; digital image, FamilySearch … Continue reading

The headstone also provides Henry’s age at the time of death as 52 years and one month.  By calculation, that generates a birth month of January 1796.

Furthermore, Henry’s grave is located next to the headstone of Almira Davis, his daughter.  Both are in Row 11 of Cemetery Section 1.[9]Pate, ed., Milford Township Cemeteries, 2005, 81.  The photograph at the top of this post shows the two headstones situated next to each other.

The gap between the two gravestones suggests that other family members may have been buried alongside them.  One candidate is Almira’s husband George Davis.  A note in the 2005 local cemetery book states “there is a burial record for George Davis, but no headstone.”[10]Research Staff, Oakland County Pioneer and Historical Society, “Research Report: Parents of Stephen King,” p. 2; report to Steven Jonnes, Ashburn, Virginia, 14 June 2020; digital copy … Continue reading  It could very well be that he is buried between Henry and Almira, but the stone has disappeared.

It looks to me like you might be able to fit two headstones in the gap between Henry and Almira, so another candidate is Jane King, Henry’s wife.  She remains a cypher and we can’t even be sure of her maiden name.  If the 1816 marriage record in Portage County, Ohio of Henry King and Jane Dunlap is relevant, then her maiden name was Dunlap.  However, the 1903 death certificate of daughter Helen L. Terry lists her mother as Jane Hopkins.[11]Michigan, Certificate of Death no. 400 (1903), Helen L. Terry.  Could Jane have remarried a man surnamed Hopkins after Henry’s death in 1848?  That’s one possibility.  I need to look more deeply at Jane.

In summary, we are much closer now to verifying that Henry King (1796-1848) was Stephen W. King’s father.  I’m confident enough that I have added him to my official tree on Ancestry.  However, we still have not met the Genealogical Proof Standard.  At a minimum, I need to conduct more research, both in Michigan and Ohio (and possibly New York) to meet the reasonably exhaustive research standard.   Land and probate records, especially in the Ohio counties of Portage, Medina, and Stark, may provide more evidence.  I also need to deconflict the two names in the death certificates of Henry’s daughters Mary Eliza Richardson and Helen L. Terry in order to meet the resolve contradictory evidence standard.  Mary’s identifies her father as Henry King,[12]Kansas, State Board of Health – Division of Vital Statistics, Standard Certificate of Death no. 252-2702 (1920), Mary K. Richardson; database online, “Leavenworth , Kansas Death Index, … Continue reading but Helen’s identifies her father as Samuel King.[13]Michigan, Certificate of Death no. 400 (1903), Helen L. Terry.

The Illegitimate Baby of Rosalie Rist

Harriet Kennelly Was Orphaned at a Young Age
Scroll to top