Oh my goodness … when it rains it pours.  Without really expecting to, I found the ship passenger record for Lawrence & Rose Whaley when they immigrated from France!

As the previous two blog posts have discussed here and here, I’ve made a major breakthrough this month on my Whaley ancestry.  Fourth-great-grandparents Lawrence & Rose Whaley were born in the Haut-Rhin department of Alsace-Lorraine as Laurent Wührlin and Marie Rosine Rist dite “Rosalie” in 1796 and 1801, respectively.  Laurent was born in the village of Hartmannswiller, Rosalie in the town of Dannemarie.

They arrived in America on 16 December 1827 on the French brig Deux Ernest out of Le Havre.  I wasn’t sure I would ever find this record, but here it is.

The scan shows an excerpt from the original passenger manifest.[1]“New York Passenger Lists, 1820-1891,” digital images, FamilySearch (https://www.familysearch.org : accessed 17 March 2020, manifest, S.S. Deux Ernest, 29 December 1827, roll 11, image … Continue reading  Laurent Wichrlin is the name at the top.  This is clearly our guy.  The data all match – the age (30), occupation (baker), and family composition (wife + 1 child).  The only discrepancy is the spelling of the surname.  It’s transcribed as Wichrlin and certainly seems to read that way.  However, you could also read it as Wührlin because the top curve of the “c” may have been formed by the second dot in the umlaut.

There’s a record-searching lesson here.  I have tried several times over the years to search for Lawrence Whaley in passenger records.  I even knew the family immigrated between 1826 and 1829 and likely landed at either New York or Philadelphia, but still couldn’t locate them.  What didn’t help, of course, was that I was searching for the name Whaley, not Wührlin.  It wasn’t until two weeks ago that I finally identified Lawrence’s Alsatian surname as Wührlin.

But honestly, it wasn’t the knowledge of the new surname that allowed finding the passenger record.  I only found it when I stopped trying to search for different permutations of Whaley and Wührlin and simply focused on the first name Laurent!  So it was the new spelling Laurent as opposed to Lawrence or Laurence that cracked the code.  I entered Laurent plus the first letter W in the surname field.  The search was limited to the specific collection “New York Passenger Records, 1820-1891 in FamilySearch.  That’s what did it.  Strangely, even typing the spelling Wuhrlin in the surname field in this database (and allowing for alternate spellings) did not reveal the manifest record, despite 76 results.

So, the lesson is to keep trying different spellings and name combinations.  Databases can be fickle depending on their search engine structure and protocols.  I often go back and forth between Ancestry and FamilySearch because sometimes you’ll find something in one that you couldn’t find in the other.  Certain search queries work in one but not the other.  Also, transcriptions can sometimes be misleading, especially for hand-written records prior to the 20th century.

Although the ship landed in New York on 29 December 1827, most of the 80 or so passengers disembarked at Lewes, Delaware on 16 December, including Laurent.  I didn’t notice this at first until I saw a faded note in the right margin that indicated which passengers got off in Delaware and which got off in New York City.

Why would that be?  I did some more digging.  When I googled Deux Ernest Le Havre, a cemetery memorial popped up for a Joseph Brutsché (1801-1888).[3]Findagrave.com, Find A Grave, database (https://www.findagrave.com : accessed 17 March 2020), memorial ID 53000875 for Joseph Brutsché, 1801-1888, Lawnview Cemetery, Rockledge, Montgomery, … Continue reading  I clicked on the associated link after cross-checking with the ship’s manifest and finding that a Joseph Brutsché is listed on the manifest with Laurent.  The memorial entry includes this parenthetical note: “Family lore has his ship landing first at Lewes in need of repair.”

That’s an interesting tidbit.  Were the passengers told to get off in Lewes because they didn’t know how long the repairs would take?  Or maybe the passengers forced the issue because they were scared by the condition of the ship.  Possibly the weather was poor in December and many refused to spend another day at sea.  These were not luxury cruises.  In fact, maybe the reason they were so far south – about 175 miles from New York City – was that the ship was blown off course and damaged by an Atlantic storm.  Regardless, at least 9 passengers remained on the ship after repairs and disembarked in New York.  I wonder if those who disembarked in Delaware were required to travel to New York City to process their immigration or if immigration officers were able to handle that in Lewes.

Their ship Deux Ernest was a French brig.  I couldn’t find a picture of it online but did find a painting of another French brig called the Tiphis from 1828 that should be a close approximation.  See the image at the top of the post.

Another listing on the manifest is the Zimmerman family.  This is likely Laurent’s brother-in-law Jacques Zimmerman, although the manifest does not include a first name.  Jacques’ wife, Maria Agatha Rist (1792-1843), was Rosalie’s older sister.   As mentioned in the previous blog article, Jacques was a witness to Laurent & Rosalie’s marriage in 1823.[4]Dannemarie, Haut-Rhin, Alsace-Lorraine, “Etat-civil de 1797 à 1862,” mariages (weddings), Laurent Wührlin and Marie Rosine dite Rosalie Rist, 30 Dec 1823, p. 183-184, no. 11.   He and Agatha were married eight years earlier.[5]Dannemarie, Haut-Rhin, Alsace-Lorraine, “Etat-civil de 1797 à 1862,” mariages (weddings), Jacques Zimmerman and Maria Agatha Rist, 4 May 1815, p. 140.  According to the manifest, Jacques was traveling with his wife and 5 children, plus one who died on the voyage.  That information tracks correctly with their known children.  The Zimmermans ended up in Lebanon, Pennsylvania, about 120 miles west of Princeton, New Jersey, so the two families did not live in the same community despite their familial connection.

It is very gratifying to achieve this long-standing breakthrough.  One of the most satisfying aspects of genealogy for me is learning about how and why and when my ancestors came to America.  It’s one of my highest priorities: trying to push each line back to its point of immigration and understanding the circumstances involved in the passage.  In the case of Laurent Wührlin and Rosalie Rist, we now know how they came and when – although we can speculate, the why will probably never be fully answered.

I have ordered pre-Republican parish records for Dannemarie in hard copy because Alsatian vital records prior to 1793 are not available online.  The records are being shipped from France.  Hopefully I can push these lines back even farther. 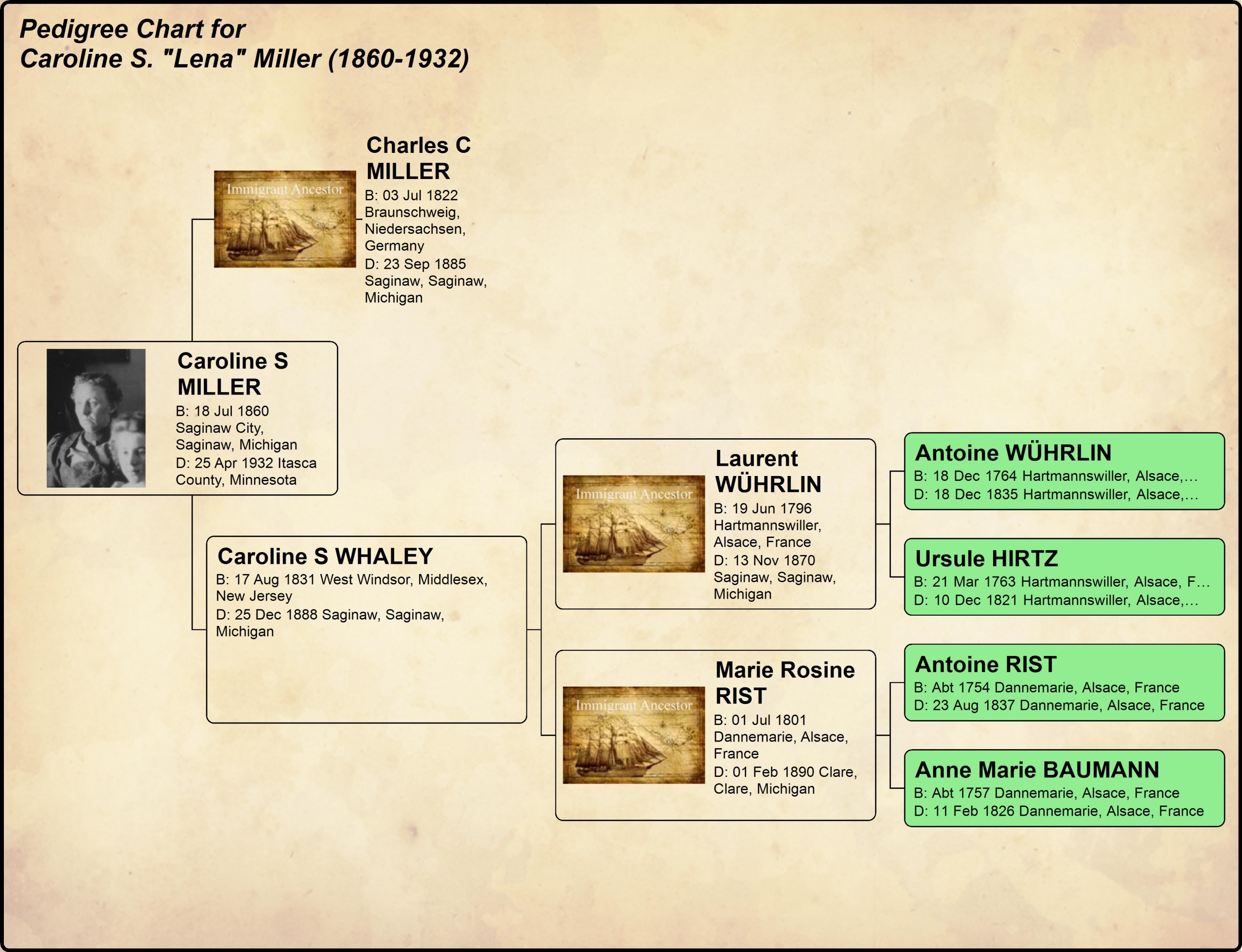