My very first breakthrough when I started working on the family tree a decade ago came in our Kennelly line of ancestors.

Dad reported that Harriet’s father might be a William Kennelly who served in the Civil War, according to a story he received from his uncle, Ed Lukemire.[2]Nelson Jonnes, “Jonnes Family Record,” p. 31.  Dad had no specifics, however, and did not trust the information, especially since any father of Harriet’s would have been too old to serve in the Civil War. 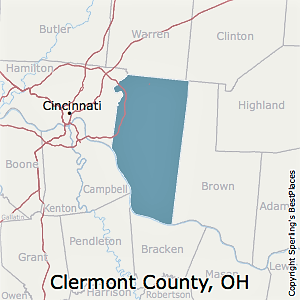 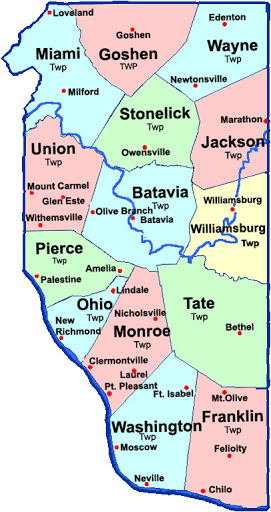 So I started looking at Harriet.  What jumped out right away was that she was born in Michigan.  That seemed out of place, given that most of our Lukemire ancestors came from New Jersey.[4]The Lukemire, Homan, Harden, McIntosh, and Davis lines were all from New Jersey.  The five U.S. censuses from 1850 to 1900 uniformly cite Michigan as Harriet’s birthplace.[5]1850 U.S. census, Clermont County, Ohio, population schedule, Monroe Township, p. 15B, family 217, Harriet Kinley in household of Daniel Light.  1860 U.S. census, Clermont County, Ohio, population … Continue reading  Harriet was 15 years old in 1850, thus her arrival in Ohio occurred at an age younger than that.

The key to unlocking the mystery were Kennelly Bible pages available online.[6]Kennelly Bible, family pages only (4); digital copy held by Danita Maseles (location unknown); online images posted 15 August 2008 by Maseles, Kennelly Bible Records, 1796-1919, … Continue reading  They revealed that Harriet’s parents were John Kennelly and Maria Chapman.  John was from the shores of Great Sacandaga Lake in the Adirondack Mountains; Maria was from Connecticut.  They married 25 August 1822 in Desmond Township, St. Clair, Michigan.  We don’t know why they migrated west to Michigan Territory, but they produced at least 7 children there between 1823 and 1835.  Five survived to adulthood: Harmon, Chester, Sarah, Jane, and Harriet.

As the maps below show, St. Clair County is northeast of Detroit in the “thumb” peninsula, bordering Lake Huron and Ontario, Canada.  The county seat is Port Huron.  This was frontier territory in the 1820s and 1830s and thinly populated.  Two bands of Chippewa lived on reservations in the county and a few old French settlers still resided there.  Wolves were a major menace. 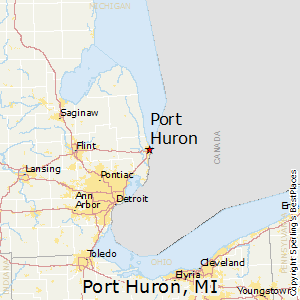 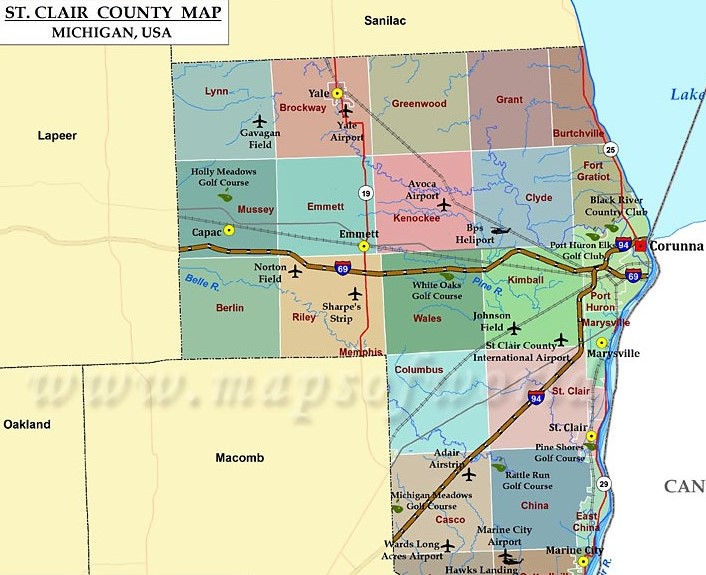 The current township map does not include Desmond because the name was changed in 1837 to Port Huron Township.  When the Kennellys lived there, Desmond Township was much larger and the land John owned was located in what is today Fort Gratiot Township, just to the north of Port Huron.  The great image at the top of the post is a birds-eye view of Port Huron in 1867.

Despite the hardships, John & Maria made a good life for themselves in Michigan for 14 years, owning a farm and raising their children.  John was prominent in the early establishment of St. Clair County and was elected Desmond Township supervisor six times (1829-1833, 1835).[7]William Lee Jenks, St. Clair County, Michigan, its history and its people : a narrative account of its historical progress and its principal interests (Chicago: Lewis Publishing, 1912), p. 247; … Continue reading)  I will have more to report in future posts about John’s life in St. Clair County, his possible involvement in the War of 1812, as well as the Revolutionary War exploits of his father and grandfather.

So, why did Harriet end up in southern Ohio, 350 travel miles from her birthplace?

The answer: disaster befell the family.  Both parents died within a couple years of each other and the children were orphaned.  John Kennelly died 2 June 1836, only 14 months after Harriet was born.[8]Kennelly Bible, family pages only, online image.  Essentially, she never knew her father.  A young son, James, died three weeks later, so possibly a contagion caused both deaths.

When their mother died, Harriet was 3 years old, Jane 7, Sarah 9, Chester 11, and Harmon 15.  It would have been a scary time.  There’s no indication of other family present in St. Clair County, so Harmon must have assumed the family lead at age 15.  They probably relied on neighbors for aid and assistance.

Clearly, this tragedy was the trigger for Harriet’s move to Clermont County, Ohio.  What about her brothers and sisters?  How soon did the move occur?  And why that location?

The evidence indicates that the Kennelly children moved to Ohio fairly quickly because 4 out of 5 of them are documented in Clermont County, beginning in 1840.  My guess is the migration occurred in 1838 or 1839.  Most likely they made the journey by going first to Toledo by land and then proceeding to Cincinnati on the Miami & Erie Canal.

Here’s a list of the earliest records documenting the children in Clermont County, Ohio:

Because Harmon is enumerated in Clermont County in 1840, his younger siblings should be there too, but the 1840 federal census, of course, only lists heads-of-household by name.  How frustrating![17]It is also possible that Harmon traveled to Ohio ahead of his brothers and sisters.  It is hard to say for certain because of the inherent name limitations of the 1840 U.S. census.

The five siblings may have been split up in order to survive.  Harmon’s household in 1840 only includes two older females, identities unknown.  No children are present, so his brothers and sisters must have been taken in by other families, possibly as servants.  Harriet, for example, was probably a servant for Daniel Light in 1850 and was definitely a servant for Samuel Sly in 1860, both well-to-do farmers.

Again, though, why Clermont County, Ohio?

We must assume a familial connection brought the children to the area.  In that regard, the best candidate is Thomas Kennelly (1792-1872), who may have been John’s older brother.  Like John, he was born in New York and also named a son Harmon (born 1833).  In 1840, Thomas headed a large household of 13 people.[18]1840 U.S. census, Clermont County, Ohio, population schedule, New Richmond, p. 224, line 18, Thomas Kennelly; digital image, FamilySearch (https://familysearch.org : 1 July 2020); citing NARA … Continue reading  It is conceivable that one or more of the Kennelly orphans moved in with Thomas’s family.  Harriet, for example, could be represented by the female under 5 in this household, and Sarah could be represented by one of the two females 10-14.

Another candidate is a Mrs. Chapman, age 50-60, who might be related to Maria Chapman.[19]1840 U.S. Census, Clermont County, Ohio, population schedule, Ohio Township, p. 218, line 4, Mrs. Chapman; digital image, FamilySearch (https://familysearch.org : 1 July 2020); citing NARA microfilm … Continue reading  She is listed only several lines away from Harmon.  Two males aged 20-30 and one female 5-10 resided with her.  If this is the connection, then the female 5-10 could be Jane Kennelly.

Harmon Kennelly became a steamboat engineer on the Ohio River.   His brother-in-law John Selvage also worked on riverboats.  Harmon actually lost his engineer license in 1870 as a result of an investigation of a collision of two boats on the Ohio River in light snow on 21 Dec 1869.[20]“Collision of the Steamers Swallow and Champion – Decision of the U.S. Local Inspectors,” Cincinnati Daily Gazette, 25 February 1870, p. 1; digital image, GenealogyBank … Continue reading  He apparently was able to reclaim the license later because he is enumerated in 1880 as an “engineer on a steamboat,” age 56.[21]1880 U.S. census, Clermont County, Ohio, population schedule, Ohio Township, ED 46, p. 197C, dwelling 269, Hiram Kennelly; digital image, FamilySearch (https://familysearch.org : 1 July 2020); citing … Continue reading  I have not found a death record.

Jane Kennelly raised several children with her husband John Selvage.  She moved to Indianapolis after his death in 1873 and died there in 1919.  Sarah Kennelly, twice widowed, remained in Clermont County; she died in New Richmond in 1913.

Chester Chapman Kennelly (1827-1900) is the only sibling without a documented association to Clermont County.  He was 11 at the time of his mother’s death, though, so it’s hard to imagine that he wouldn’t have joined his brothers and sisters.

Our first documented sighting of Chester occurs in New Orleans (!) in 1846, where he enlisted in the U.S. Army.[22]“United States Registers of Enlistments in the U.S. Army, 1798-1914,” database with images, FamilySearch (https://familysearch.org : 1 July 2020), Chester C Kennelly, 7 March 1846; … Continue reading  His brother’s employment on riverboats could be a clue here.  Maybe Chester made his way down the Ohio and Mississippi rivers to New Orleans because he too was a riverman.

Chester served five years in the Army.  Based on the known record of the 8th Infantry Regiment, he should have seen significant action in the Mexican War (1846-1848). The 1850 U.S. census captures him at Ft. Lincoln, just west of San Antonio.[23]1850 U.S. census, Medina County, Texas, population schedule, Ft. Lincoln on the Seco, p. 399B, dwelling 8, family 8, line 24, 1 Corp’l Chester C Kennelly in 8th Infantry; digital image, … Continue reading  In that capacity, he probably fought against Comanche warriors.  The fort commander was Major James Longstreet, later to become a famous Confederate general.

Subsequent to his discharge in 1851, Chester lived the rest of his life in various places in Texas.  In 1893 and 1894, he was an asthma patient at military hospitals in Leavenworth, Kansas and Dayton, Ohio.  He died in Needville, Fort Bend, Texas in July 1900.[24]Kennelly Bible, family pages only, online image. 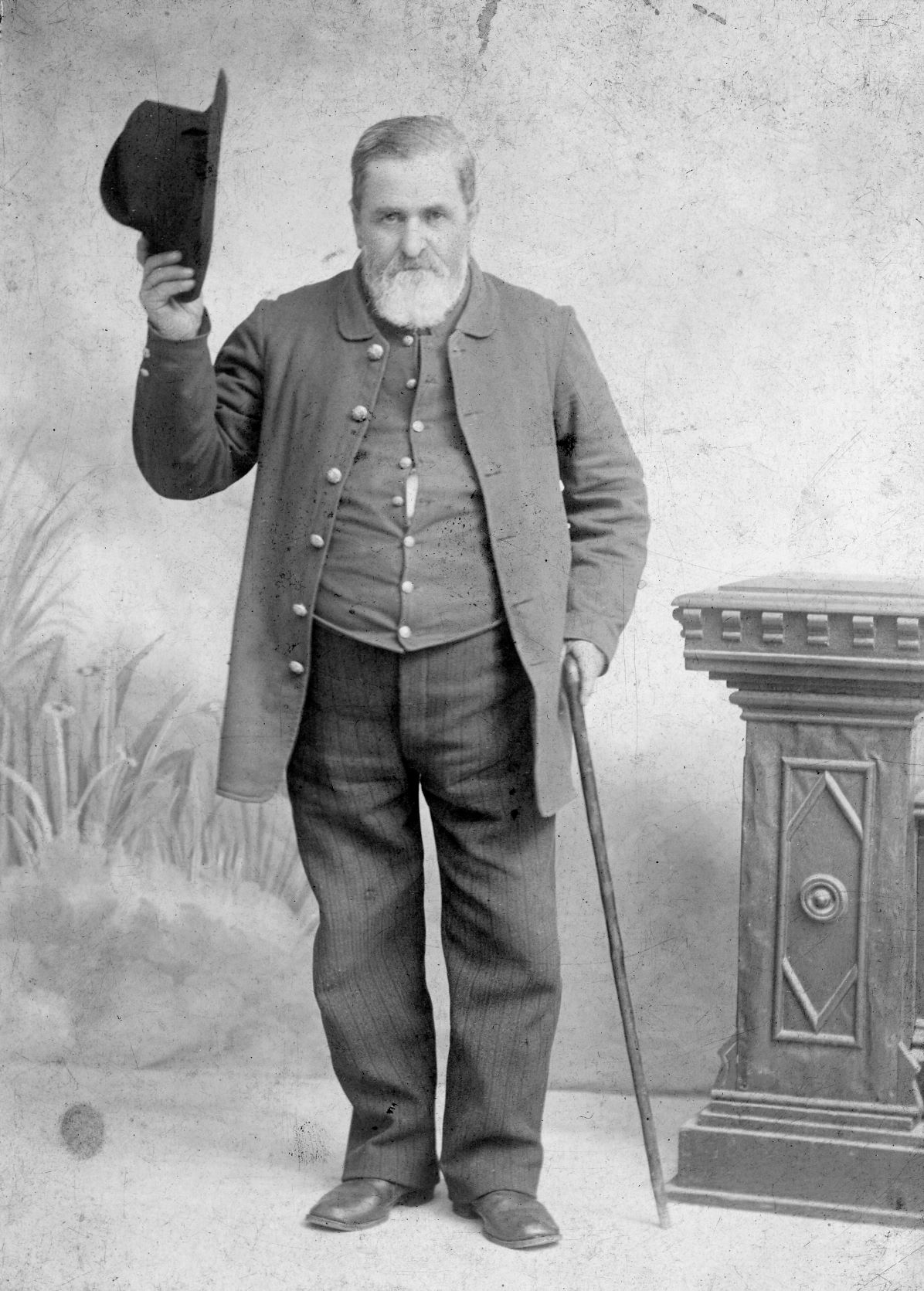 Chester is the only member of this family for whom we have a photograph.  It was taken in Indianapolis, Indiana between 1885 and 1890 while he was visiting his sister Jane Selvage.

Harriet Kennelly, my 2GG, was the last of her siblings to marry.  Her husband, Wesley Blalock (1825-1895), was an older Civil War veteran and crippled chair factory worker.  When she married him in November 1864, she was 29, getting close to being an old maid and probably still working as a servant.  One can guess that Wesley was the best she could do, and she was the best he could do, given his war injuries and job prospects.  Hopefully, they were still pleased with one another.