In 2016, I wrote a series of three articles published in the Minnesota Genealogist regarding my 2GG Fred A. King (1857-1920).[1]Steven Nelson Jonnes, “Searching for the Parents of Fred A. King of Saginaw, Michigan,” Minnesota Genealogist, 47:1 (Spring 2016): 6-11; Steven Nelson Jonnes, “Fred A. King: Early Entrepreneur … Continue reading  Fred was born and raised in Saginaw, Michigan and was a politician there in young adulthood, but moved to Grand Rapids, Minnesota in 1891 where he opened a real estate titling company.  In 1912, he was appointed U.S. Land Office Receiver in Cass Lake, Minnesota.  He died in 1920, age 63. 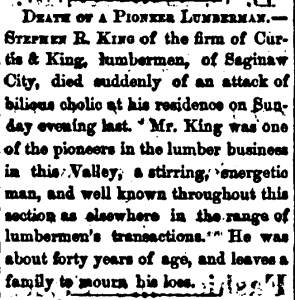 Stephen W. King’s parentage, however, remains unknown.  In the absence of a birth certificate or record of any kind, let’s begin by looking at the two federal census records which capture Stephen W. King as an adult:

The King surname is obviously a challenge given its prevalence.  Stephen would have been enumerated in the 1840 U.S. census as a male aged 15-19, but in Ohio alone there are 600 King head-of-household entries, dozens of which include males aged 15-19.

So where do we start?  Since Stephen was living in Milford, Michigan in 1850, were there other Kings nearby with whom he may have been related?  In my 2016 article, I speculated that two teenage girls enumerated in Milford could be his sisters.[8]Jonnes, “Searching for the Parents of Fred A. King,” 11.    Mary King and Helen King, ages 18 and 15, may be viewed in the George Davis household, seen below.[9]1850 U.S. Census, Oakland County, Michigan, population schedule, Milford Township, family 1537, Helen King and Mary King in household of George Davis; digital image, FamilySearch … Continue reading  Like Stephen, both were born in Ohio, and their first names resonated with meaning since Stephen named his first-born child Mary Helen King (1847-1907).

She moved to Michigan with her parents when eight years old, where she first resided in Milford, and then moved to Saginaw when 15 years old.[15]Ibid.

This information indicates that the King family, including siblings Stephen, Mary, and Helen moved from Ohio to Michigan in 1844.  I suspect the father at least died before 1850.  Otherwise, why would the two teenage girls be living in Milford, Michigan with the George Davis household in 1850 rather than their head-of-household father? 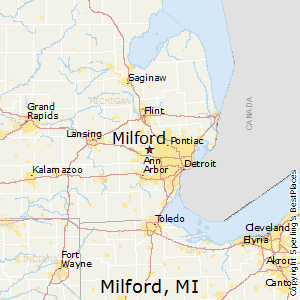 Per the ages of the children, the family left Ohio no earlier than 1843.  So, why were Mary and Helen King living in this particular household?  Could Almira have been their older sister?

It is suggestive that Almira’s husband, George Davis, was a clothier in Milford, Michigan in 1850 while Stephen W. King’s occupation there was “wool carder.”  Stephen may have been working for his brother-in-law in Milford prior to moving to Saginaw.

Let us focus on Medina County, Ohio, where we know Almira King was married, and search for a King head-of-household in the 1820, 1830, and 1840 U.S. censuses that would match the age ranges of these four siblings.  Given the large gap in time between their births, there could be other offspring.

However, there are no Henry Kings enumerated in Medina County, Ohio in either the 1820 or 1840 federal censuses.  When the search is expanded to all of Ohio in 1840, a promising match appears.  A Henry King family of seven is enumerated in Lawrence Township, Stark, Ohio in the 1840 census.[20]1840 U.S. Census, Stark County, Ohio, population schedule, Lawrence Township, p. 151, Henry King; digital image, FamilySearch (https://familysearch.org : accessed 9 March 2018), citing NARA microfilm … Continue reading

These ages are precisely the same as the 1830 census enumeration, once you add 10 years – and they accurately capture the births of Mary and Helen in 1832 and 1836, respectively.  Almira’s absence is explained by the fact that she had already married George Davis.

Here are the federal census records which hypothetically capture Henry King as an adult:

Although these census enumerations are in three separate counties of Ohio, the locations are actually quite close.  Hinckley Township is about 15 – 25 miles west of the area where Northampton Township used to exist in then-Portage, now Summit County.  Lawrence Township is only about 20 – 40 miles south of Hinckley, depending on where their farms may have been located.

Cross-referencing the age ranges in these three enumerations generates a birth year for Henry King between 1791 – 1794.  In searching marriage records, one potential match appears.  Henry King and Jane Dunlap were married on 10 September 1816 in Portage County, Ohio.[22]“Ohio, County Marriages, 1789-2013,” database with images, FamilySearch (https://familysearch.org : accessed 12 March 2018), Henry King and Jane Dunlap, 10 September 1816, Portage County, … Continue reading  No ages or parentage information is given.  Nonetheless, both the 1816 marriage record and 1820 U.S. census enumeration are situated in Portage County, Ohio.  The presumed first-born child, Almira King, was born August 1817, eleven months after the date of this marriage record, which conveniently fits.

In conclusion, there is a good possibility that the various pieces of information collected about Henry King represent the same man and that he is the father of Stephen W. King.  However, there is insufficient evidence at this point to claim we have met the genealogical proof standard.  Nothing concrete links the three Henry King federal census records in 1820, 1830, and 1840, which are in three separate albeit close locations.  Nor can we be sure that the 1816 marriage record links to these either.  There is also conflicting information about the identity of the mother.  The marriage record says Jane Dunlap while presumed daughter Helen’s death certificate gives Jane Hopkins.  Additional information is required to resolve these issues.

New Jean Manco Book is Out