I’ve neglected my blog for two months.  But I have a good excuse.  We’ve been busy working on our new lake cabin and getting it furnished.  A very productive and fun time, actually, but I’m ready to dive back in now.

Irish-American Robert Corken (1762-1844) was a pioneer settler of Ross County, Ohio, in the south central part of the state.  He and wife Grace Mason (1754-1837) along with several children arrived in Ross County in the spring of 1798 after a 63-day journey from Maryland.[1]Although Robert and Grace met and married in Kennett Square, Chester, Pennsylvania, she inherited some land in Maryland from her father, precise location unknown.  Robert is my 4th great-grandfather (4GG); his daughter Rachel Corken (1796-1893) married 3GG Henry Jones (1791-1871).

After the Treaty of Greenville was consummated in 1795 with the Indian tribes of the Northwest Territory, a flood of eager settlers rushed in to claim land.  The Ohio River and its tributaries were the highways of the day.  One of those tributaries was the Scioto River.  It runs north to south in the middle of the state, passing through Columbus, Circleville, and Chillicothe on its way to the Ohio River at Portsmouth. 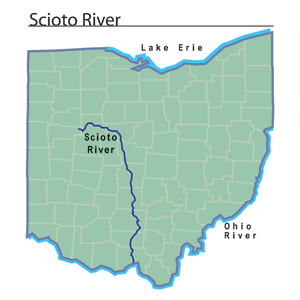 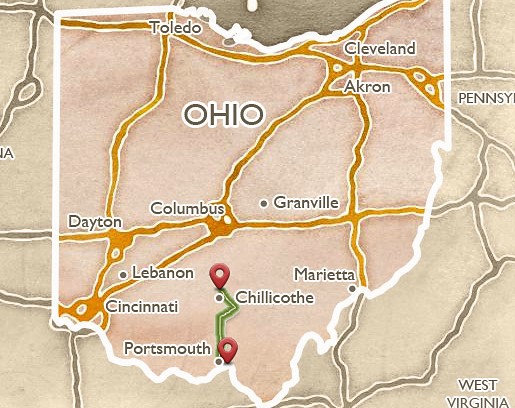 Chillicothe is the seat of Ross County.  It lies on the west side of the Scioto almost 50 miles north of the Ohio River.  Robert Corken initially settled on land across the Scioto from Chillicothe and to its southeast, in an area later incorporated as Liberty Township.  One has to remember that none of today’s jurisdictions were yet formed.  Neither Ross County nor the state of Ohio had been established yet; both were not organized until 1803.  The countryside was a complete wilderness and was simply known as the Northwest Territory.  Only the tiny settlement of Chillicothe, established in 1796, predated Robert Corken’s arrival in Ross County. 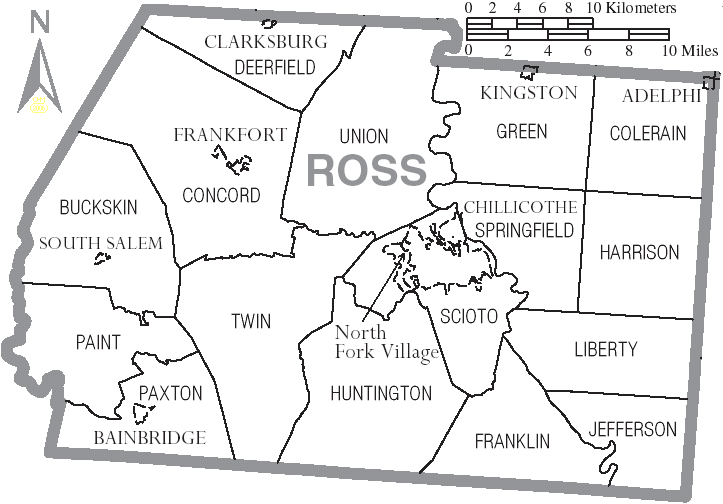 According to a local history, the first permanent settler in Liberty Township was Benjamin Hanson who arrived in March 1798.[2]Lyle S. Evans, editor, A Standard history of Ross County, Ohio: an authentic narrative of the past, with particular attention to the modern era in the commercial, industrial, civic and social … Continue reading

Robert Corken was among the next to arrive.[3]Isaac J. Finley & Rufus Putnam, Pioneer Record and Reminiscences of the Early Settlers and Settlement of Ross County, Ohio (Cincinnati: Robert Clarke & Co., 1871), p. 86; digital book, … Continue reading  According to grandson Nelson E. Jones, Robert and Grace arrived at their pioneer home on 25 April 1798, a day of thanksgiving which the family celebrated annually ever after.[4]N E. Jones, M.D., The Squirrel Hunters of Ohio, or Glimpses of Pioneer Life, p. 12 (Cincinnati: Robert Clarke & Co., 1898).  Robert settled on what was then termed “High Bank” prairie, highly desired for its fertile soil.  Other early settlers on High Bank prairie in 1798 and 1799 included James Kilgore, Thomas Orr, Zebulon Orr, Benjamin Kerns, and Amos Taylor.[5]Henry Holcomb Bennett, The County of Ross: a history of Ross County, Ohio, from the earliest days, with special chapters on the bench and bar, medical profession, educational development, industry … Continue reading

These men and their families settled so early that the land was not even available for purchase.  They had no deeds.  All were technically squatters because they had staked land prior to buying it from the government, although they expected to buy the land when it was placed for sale.

The government sale finally took place in 1802.[6]Standard history of Ross County, 468; County of Ross, 358. However, all except Kerns were “doomed to disappointment” because they were misled or deceived during the land sale.

“Their lands were purchased by others, through the machinations of those who were “in the ring,” and they were obliged to seek other locations, some going into the hills and others locating in Springfield township.  The government sold no less than a section to each purchaser, hence settlers with limited means often clubbed together and purchased a section, then subdivided it to suit the convenience of those concerned.  On the occasion of this sale, the crier failed to recognize the local designation of High bank, and offered lands at the mouth of Indian Creek, thus misleading, or deceiving, the actual residents.  All of High bank prairie, except one fractional section, was sold to Benjamin Kerns, Felix Renick, and Joseph Harness … Following this, the pioneers who failed in their efforts to secure the land upon which they had settled, fell back to the flats, or second bottoms.”[7]County of Ross, 357

Clearly Benjamin Kerns was “in the ring,” so to speak, despite being a fellow squatter and neighbor.  Many held the opinion that bribery was involved and some person or persons took revenge.  Kerns was harassed after the land sale and suffered two acts of sabotage.  His first crop of wheat was burned in the night after being harvested and stacked.  Also, he purchased trees from abroad at considerable expense to establish an orchard.  Shortly after planting the trees, they were pulled up and the roots burned.

“This second depredation within a short time confirmed the universal opinion that the mischief was done by some disappointed candidate for the land which Mr. Kerns had secured.”[8]Ibid.

Kerns then turned around and sued the original inhabitants for back rent for the time they were squatting!  Some paid nominal fees to avoid the hassle, but Thomas Orr fought and won the case.

Robert Corken was one of those affected by the scheme.  He ended up relocating his family on Walnut Creek near Mooresville in Harrison Township.[9]Standard history of Ross County, 484.

When my 4GG Thomas Jones (1766-1849) arrived in the area in 1804 from New Jersey, he also settled along Walnut Creek, somewhat to the south of the Corkens in Liberty Township.  The two families clearly had an amicable relationship because three of their children intermarried:

The offspring of these three marriages produced a great many double cousins, partially explaining why I have so many DNA matches in this branch of my tree.

The Joneses and Corkens became long-time residents of Ross County.  The Joneses, especially, resided there throughout the 19th century and into the 20th.  I believe there are still Jones descendants in the county to this day.  An annual reunion of descendants of Thomas Jones and Elizabeth Cox (1765-1847) was held at Concord United Methodist Church in Liberty Township until at least the 1990s.  I know because my parents attended one and I used to receive reunion newsletters.

One huge branch of the Joneses and Corkens migrated west in the 1860s to Nodaway County, Missouri.  I will talk more about this in a future post.