Lucia and I flew to Alaska last month!

It was an amazing trip and we hope to return.  We encourage anyone who has not been to consider it.  It is as advertised – majestically beautiful and naturally wilder than any place in the lower 48.  It is interesting how so much of the state is unreachable by any form of modern transportation except small airplanes.  Really, they need to just designate the whole place Alaska National Park and be done with it! 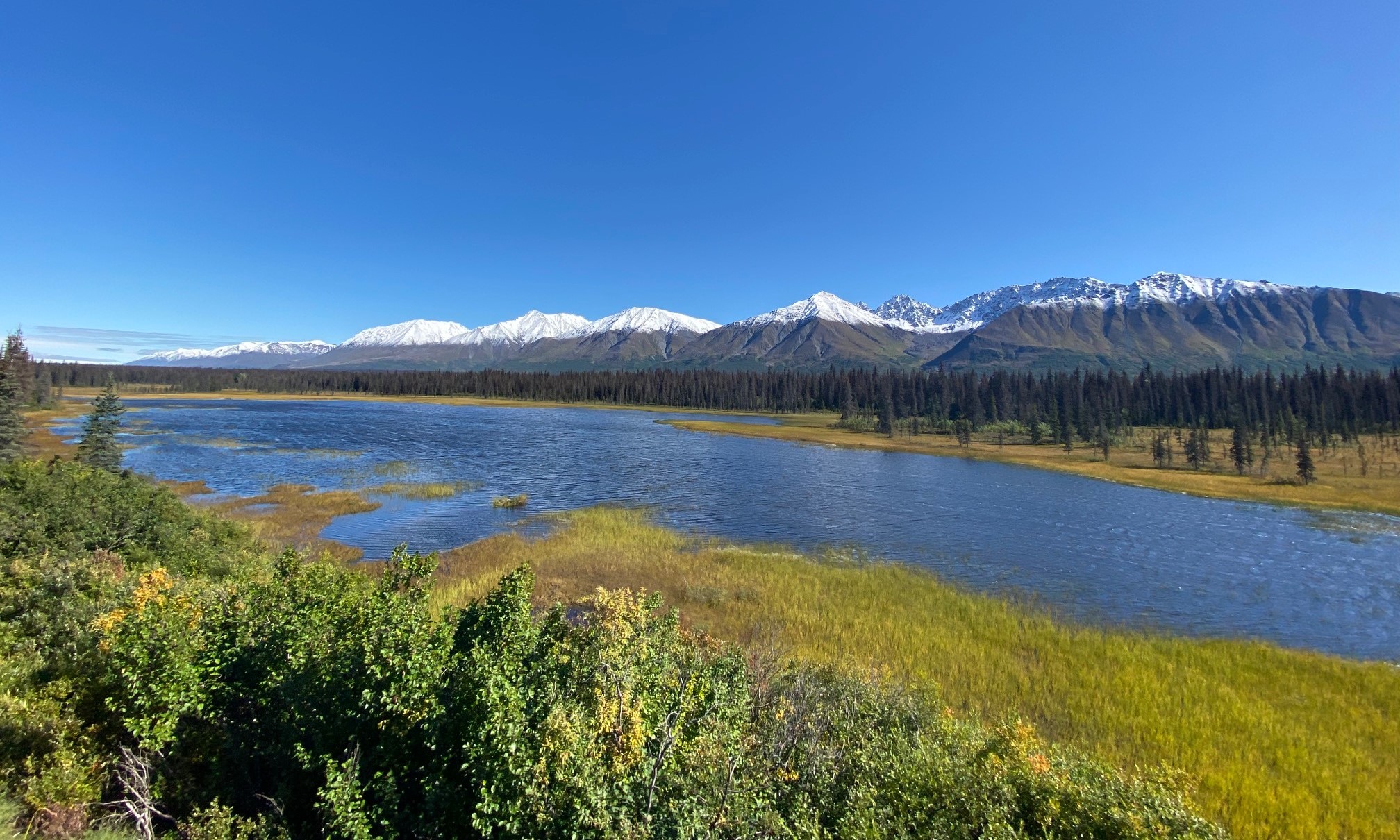 In making the trip, I accomplished an important bucket-list goal: To visit all 50 states!  Yep, Alaska was the final one.  New York state was my first, arriving in Manhattan in August 1955 on a sea voyage from Ethiopia, my birthplace.[1]New Hampshire came cheap, though.  While attending Chinese language school at Middlebury College in the summer of 1984, a classmate and I took a ride one weekend on one of those antique tourist … Continue reading  (Ha!  Technically, there is no such thing as “a sea voyage from Ethiopia” since it is a land-locked country.  Instead, we flew from Addis Ababa to Mombasa, Kenya and then got a ship to come home, sailing through the Suez Canal and the Mediterranean.  My Mom says I was seasick much of the voyage.)

The timing of our trip was good in the sense that Alaskan tourism is much reduced by COVID, so it was easy to make arrangements and venues were not crowded.  Tourists are coming back, but until the cruise industry rebounds, the industry will remain depressed.  The conductor on our train told us that Alaska Railroad operated 13 train runs a day on average in 2019; they’re now back to 3 a day.  He said 2020 was so bad they even had one train run that carried fewer passengers than train employees.

We highly recommend the Alaska Railroad.  We rode from Anchorage to Fairbanks, a leisurely 11-1/2 hour trip through some of the most gorgeous scenery ever.  The seats are very comfortable and a GoldStar ticket includes breakfast, lunch, and dinner in a traditional dining car.  The open-air platform on the back of the car allows for wonderful photographs. 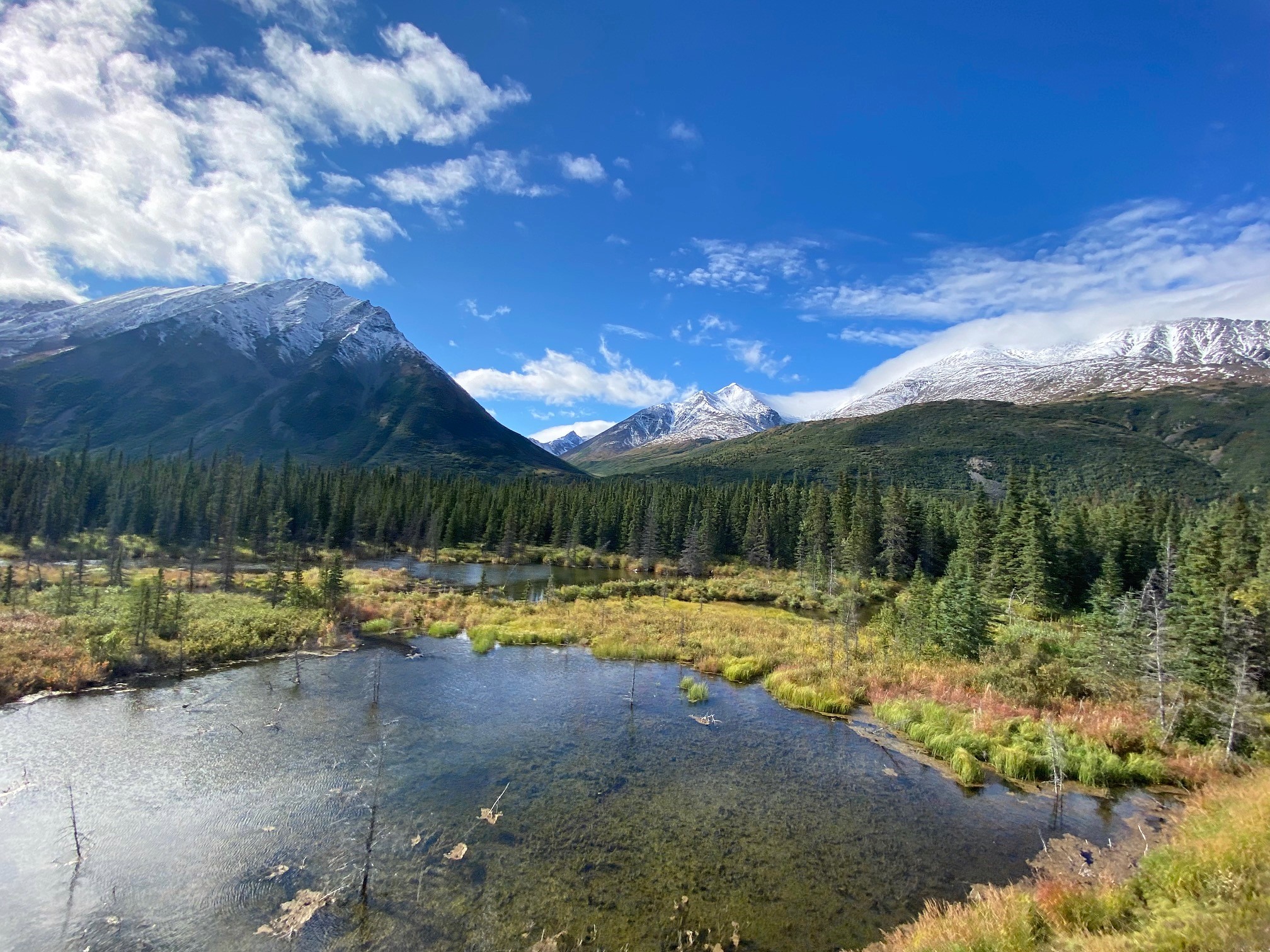 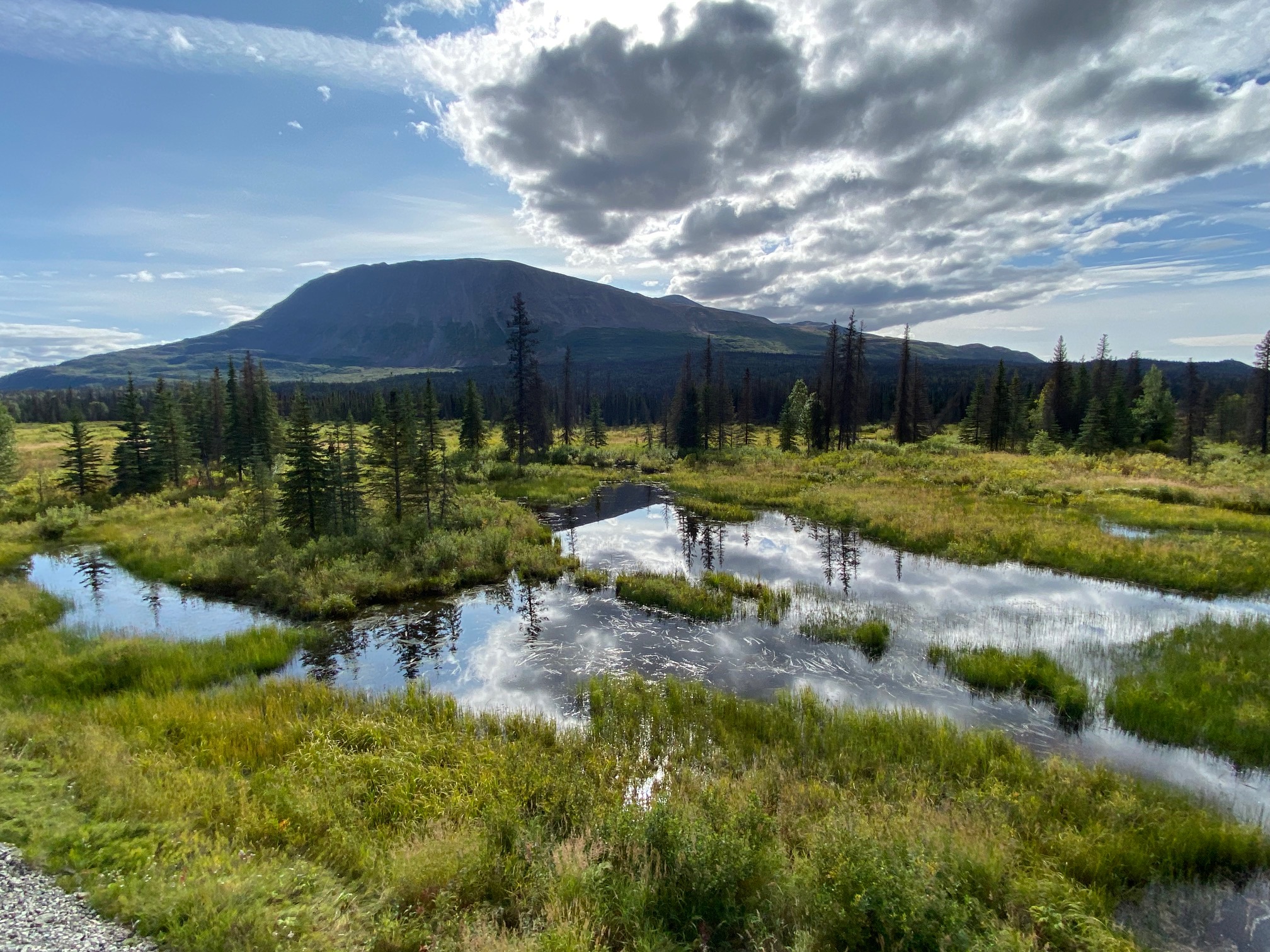 We were told we hit the 2% window.  Under normal circumstances, Alaska Railroad riders only see any portion of Mt. Denali about 30% of the time because cloud cover is so common.  In our case, the sky was crystal clear and the peak had no clouds at all. 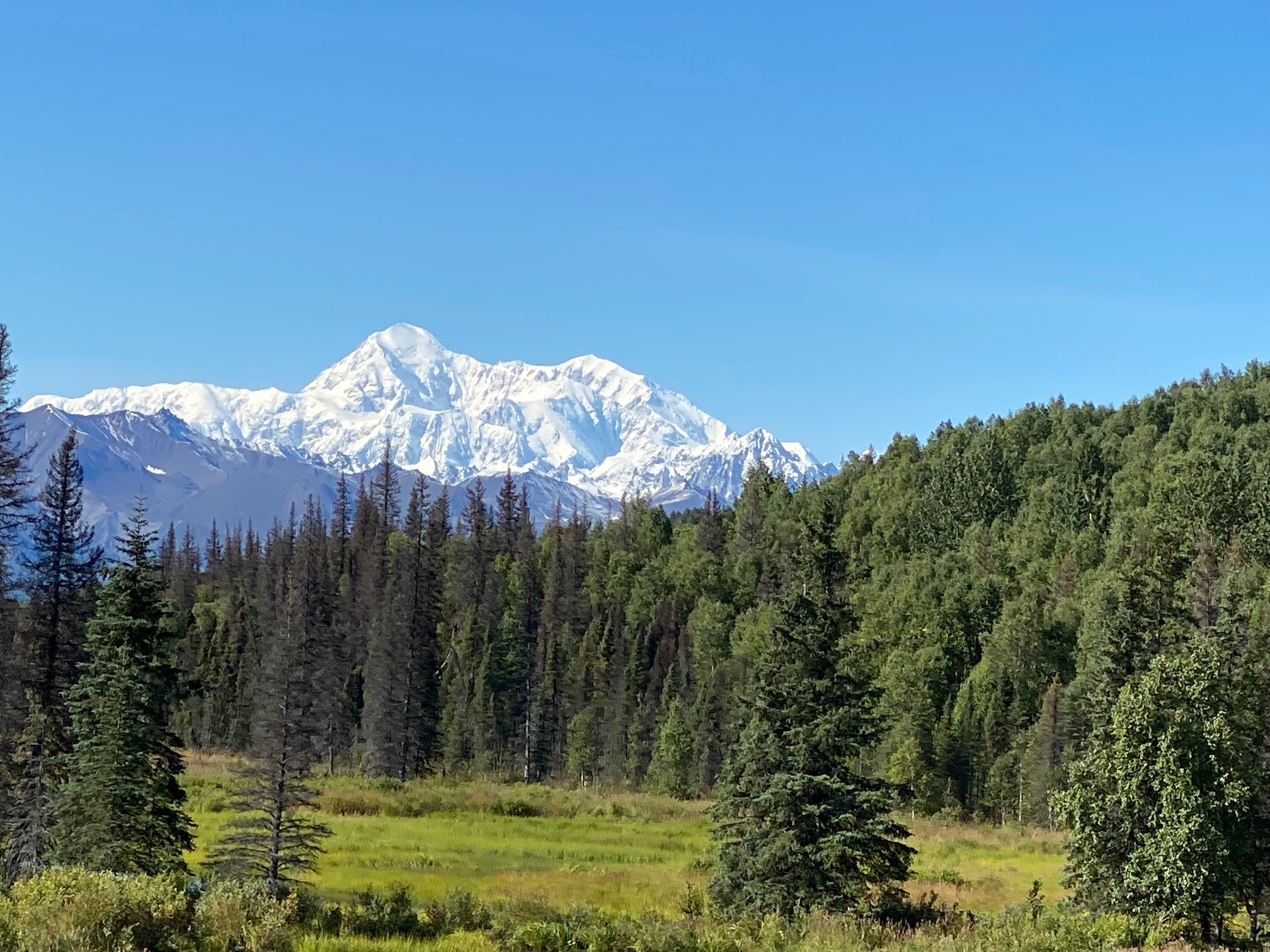 When we arrived in Fairbanks, I spent a day visiting one of my mother’s first cousins – Mary Vermilyea.  I only knew about her being in Alaska because of a report my mother and Aunt Susie produced nearly 20 years ago.[2]Susan K. Quella & Beverly Bonn Jonnes, “Genealogical Information for Those Who are Descended from Avery Vermilya (1820-1904),” June 2002, unpublished manuscript; ring binder copy privately … Continue reading  I remember I was surprised in reading the report that we had cousins living in Alaska and commented on it to Mom.  She explained that Mary married a Russian guy and lived in Fairbanks. 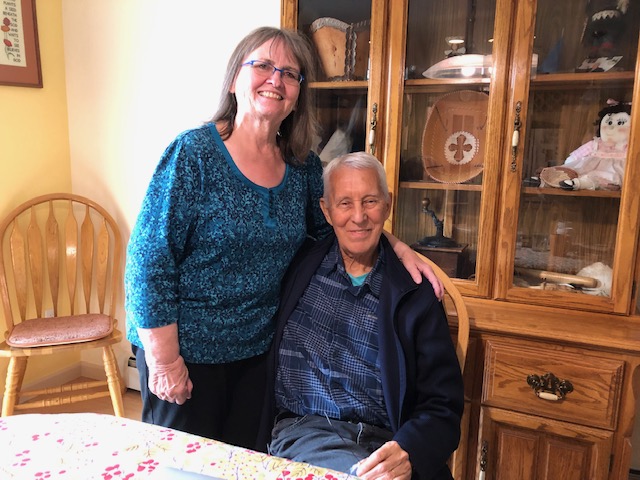 Mary is the daughter of John Knickerbocker Vermilyea (1914-1992), my great-uncle – one of the younger brothers of my grandmother, Helen King Vermilyea (1909-1994).  The photograph below shows 4 of the 6 Vermilyea siblings together with their father David Mead Vermilyea (1882-1950).  This would have been taken sometime after David’s wife Mabel Alicia King died in 1938, but I’m not sure of the exact year.  Left to right are John (Mary’s father), King, Phyllis, Bud, and their father David.  The oldest (Helen) and youngest (Caroline) siblings are not present. 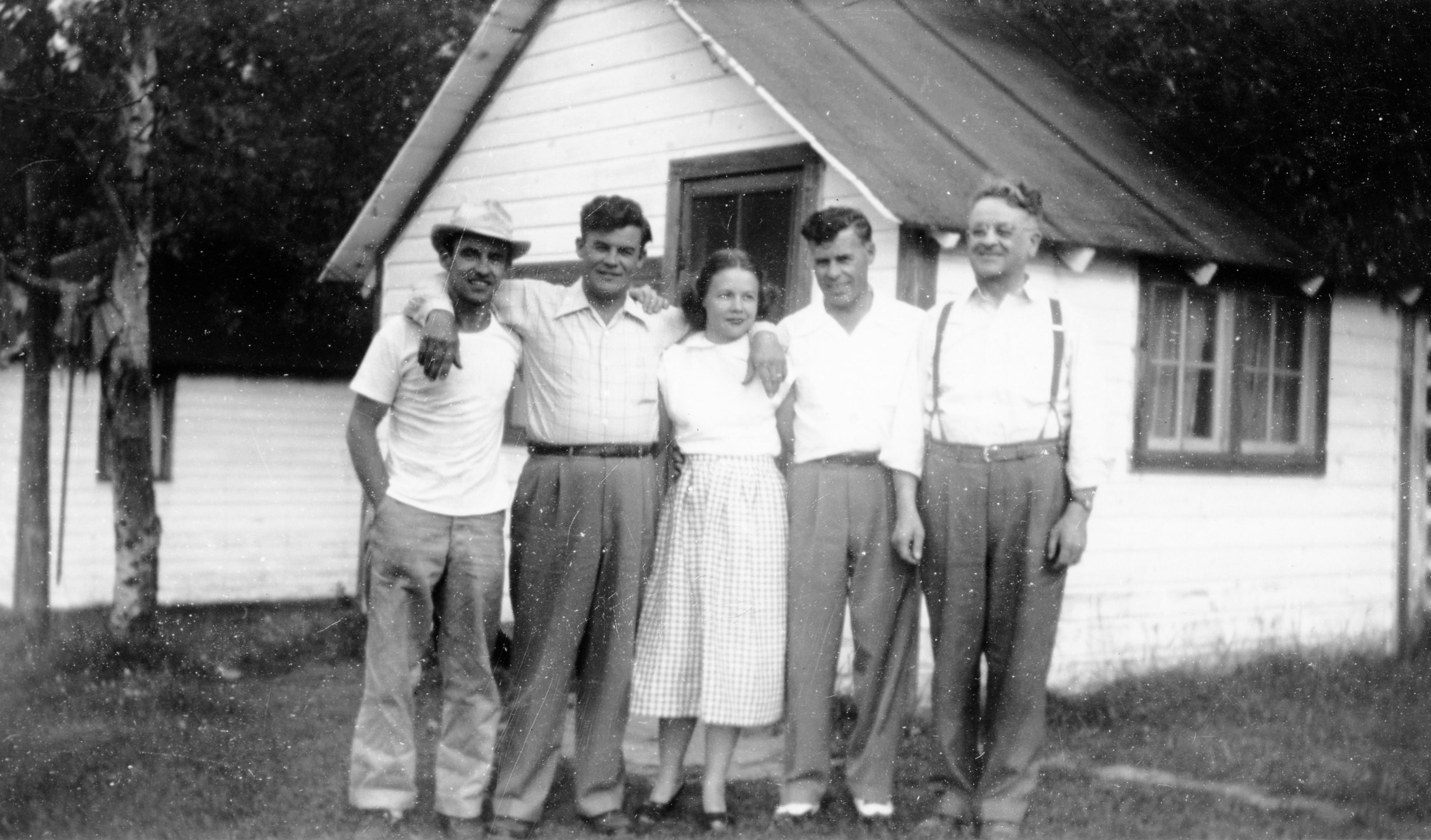 I met Mary only once in my life, an event we both remember.  It was in 1962 on a family road trip to California.  We spent a night or two at their house in San Leandro and I specifically remember playing with Paul and Mary, the two children closest in age to me.  The image below shows the family in 1957 when they lived in Rice Lake, Wisconsin; Mary is the girl on the right.  It’s possible that Mary and I also met sometime between 1956 and 1959 when her family was in Wisconsin and my family resided in Maplewood, Minnesota.  However, neither of us remembers any such visit. 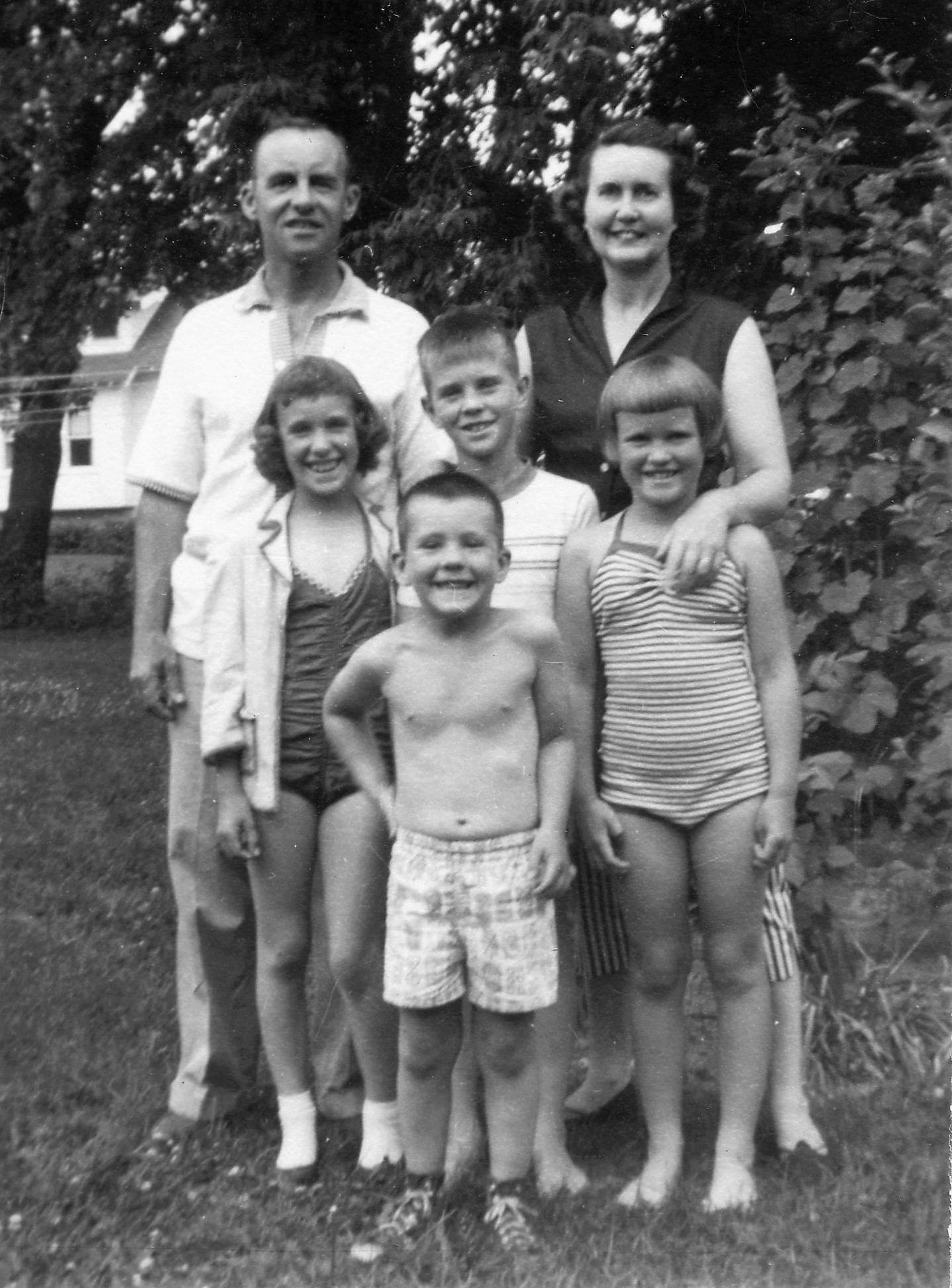 It was an emotional reunion.  Mary and I really connected and had a fantastic conversation.  Living all of her adult life in Fairbanks has not provided much opportunity for Mary to meet relatives outside of her immediate family, so it meant a lot to her to receive a visit.  Interestingly, the only cousin to stay in regular touch with her all these years was my Mother.  I should have expected it.  Mary knew all about Mom’s poems!

I found the reunion meaningful as well.  Although my grandmother, Mrs. Helen Vermilyea Bonn (1909-1994), was the grandparent I knew the best, I scarcely knew her brothers and sisters and their families.  I never met King or Phyllis and only met Bud and John once each.  I met Caroline a few times but she lived so far north in Minnesota that visits were rare.  When we paid a call on Caroline in 2014 about a week before she died, I was stunned how much she reminded me of Grandma.

In checking our genetic connection, Mary and I found out we share more DNA than is normal.  First cousins once removed share 6.25% DNA on average but Mary and I share 8%.[3]AncestryDNA shows us sharing 552 centimorgans.  The Shared cM Project 4.0 tool v4 indicates that the average amount for 1C1R relationships is 433.  I also thought Mary resembled my Mom.  It’s a shame they never had a chance to meet in recent decades.

Mary’s husband, Sam Demientieff, is an interesting character himself.  I was fascinated by his history.  He is a native Alaskan whose roots go way back and the family is pretty well known in the state.  His Russian great-grandfather, Nikolai Demientieff, came from the vicinity of Moscow in the mid-19th century to work as a fur trader at the Kolmakov Redoubt.  He married an Inuit woman, so Sam has both Russian and Inuit ethnicity.  Sam had some great stories, not the least of which involved my great-uncle John Vermilyea’s fishing trip on the Yukon River with Sam and Sam’s father.  It was a bit of a culture clash.  For John, it was a once-in-a-lifetime opportunity to fish wild salmon in the most remote location he’d ever been and he was pretty expressive about his sense of wonder.  For Sam’s father, a tough Alaskan from the old school, it was just another fishing trip.  John was also freaked out by an encounter they had with some drunk ruffians who approached their camping spot by boat and the loaded gun-toting manner in which Sam’s father ordered them to push off.

During our trip, Lucia and I also visited the Wildlife Center in Girdwood and took a helicopter tour up to Knik Glacier.  The glacier experience was wonderful, especially since neither of us had ever been in a small helicopter. 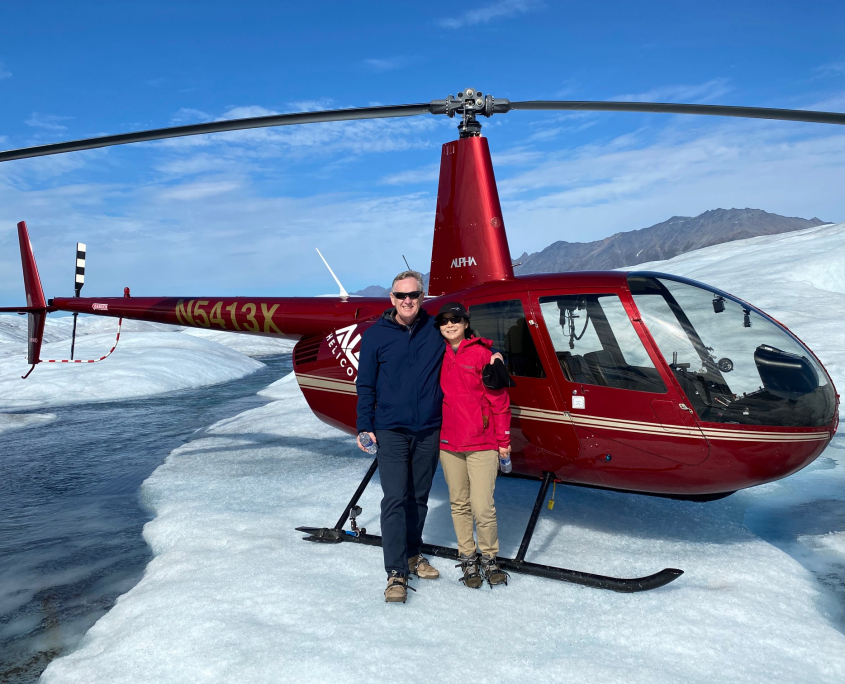 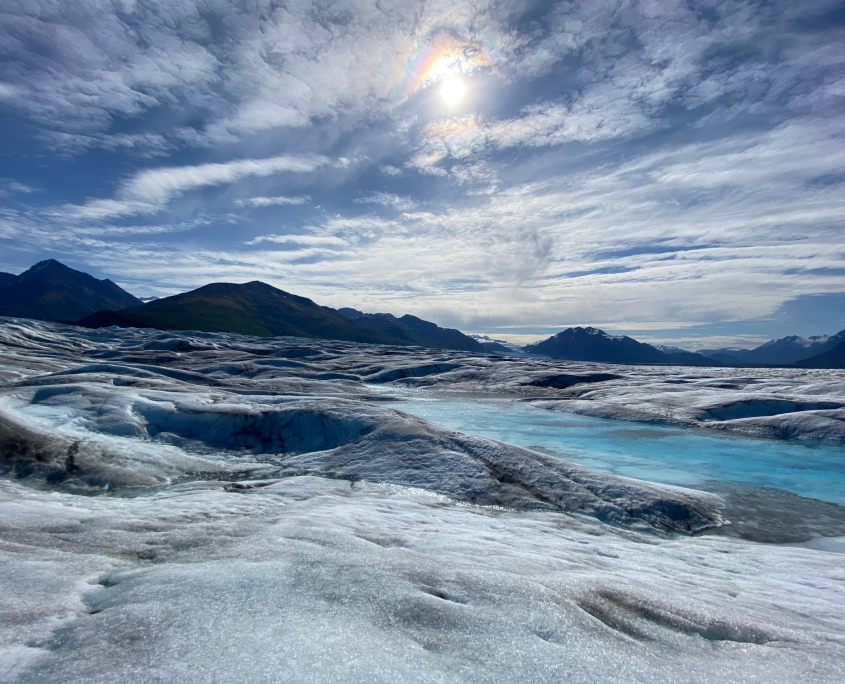 Part of our reason for going to Alaska was to potentially see the Aurora Borealis, which is number one on Lucia’s bucket list. We didn’t see it, so we’re considering a return trip in March to Fairbanks when the probability is much higher.  Mary tells us that the World Ice Art Competition occurs that month and we could also go dog-sledding!