This summer, I fortuitously connected with two distant cousins who share unusual surnames from my family tree: 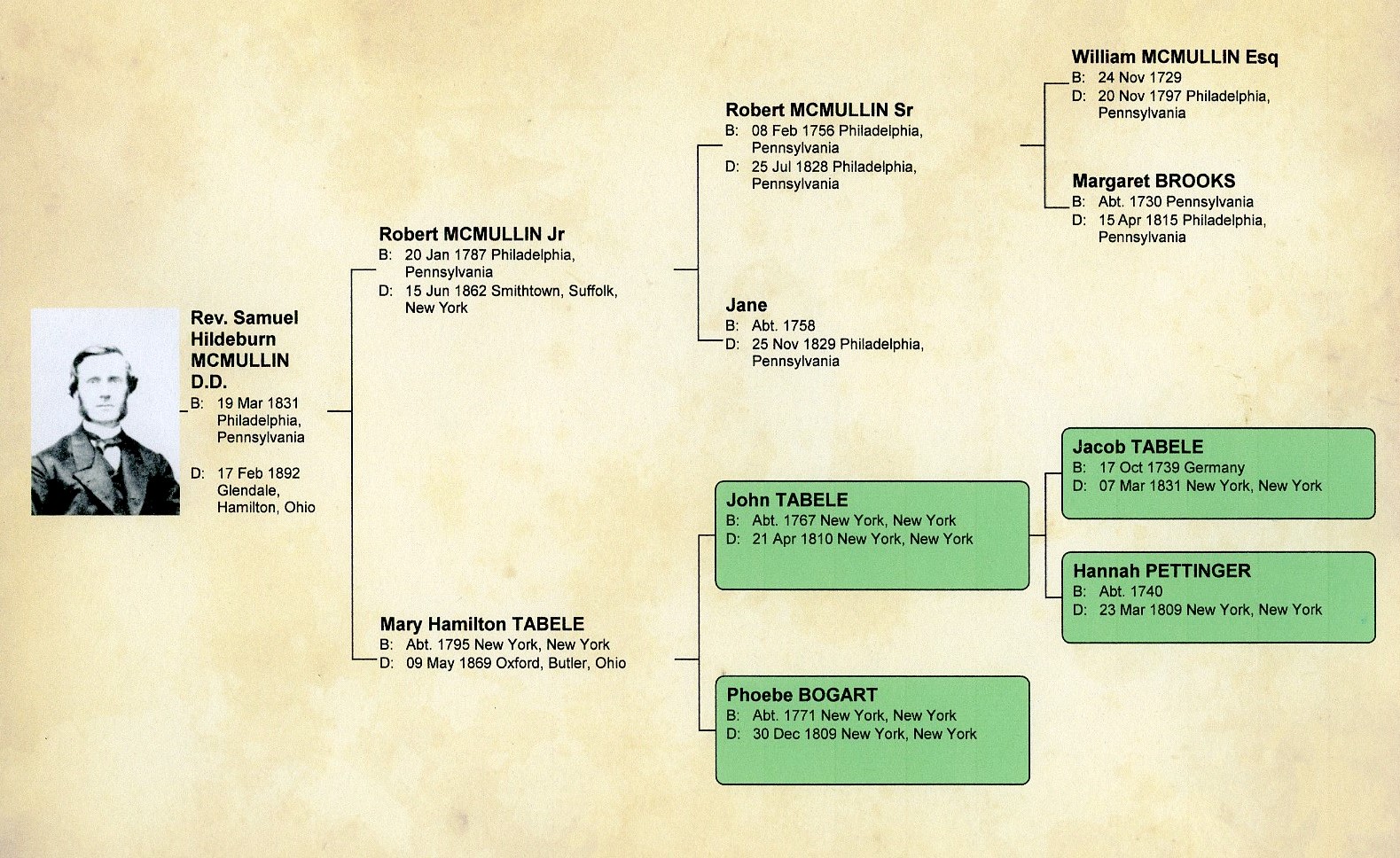 Nearly three years ago, I wrote a blog piece about my Tabele ancestry entitled Deconstructing the Tabele Family.  (Read it here.)  Last month, a very nice lady named Jo-Ann Hopkins reached out to me because she came across my article on the web.

In her email, Jo-Ann announced that her mother’s maiden name was Tabele!  The surname is so rare that none of my 30,000-plus matches on AncestryDNA, MyHeritageDNA, or FamilyTreeDNA has that surname.  I was immediately interested in what she had to say.

Jo-Ann provided her mother’s paternal ancestry generation-by-generation back to Jacob Tabele (1739-1831).  Jacob is my 5GG as well as hers.  Thus, Jo-Ann and I are 6th cousins.  I am descended from Jacob’s son John Tabele (1767-1810) while Jo-Ann is descended from Jacob’s son Philip Tabele (1779-1829).  The Tabeles were residents of Manhattan from the mid-18th to mid-19th century, but my branch ended up in Philadelphia while Jo-Ann’s ended up in Rhode Island.

Although both Jo-Ann and her brother have tested with AncestryDNA, neither shows up as a match to me.  That’s to be expected since the probability of 6th cousins not sharing DNA is nearly 90%.[1]Kevin P Donnelly, “The Probability that Related Individuals Share some Section of Genome Identical by Descent,” Theoretical Population Biology 1983: 23, 34-63; website ISOGG … Continue reading

Two interesting facts emerged from our conversation.  One, I had always wondered how to pronounce Tabele.  I have been pronouncing it with three syllables and a short “a” – TAH’ buh lee.  I think that’s how my father pronounced it, but I can’t remember for sure.   Jo-Ann’s family, however, pronounces it with a long “a” – TAY’ buh lee.  Absent any other evidence, that’s the best guess as to how our Tabele progenitors pronounced it.

Two, Jo-Ann’s family legend is that the Tabeles came from France.  That conflicts with the common perception online that Jacob Tabele was German and immigrated from there to New York City in the 1750s.  I went back and reviewed my sourcing.  Online trees are notorious for repeating one’s person error, so we have to be careful here.  If we avoid online trees and FindaGrave, Jacob’s birthplace appears to be mentioned only in a military context.  It’s in an 1897 report by the State Historian of New York that lists all the militia muster rolls for the Colony of New York from 1664 to 1775.[2]State Historian of the State of New York, Second Annual Report of the State Historian of the State of New York (Albany, New York: 1897), Vol. I, Appendix “H;” Reprinted as New York … Continue reading  Jacob’s name is listed several times in 1758 and 1759 as a militiaman under Capt. Sudam.  There are various spellings of his surname, including Tablee, Tabely, Tabbe, and Tably.  He is described as 22 years old, fair-skinned, and 5 feet 3 inches tall.  Crucially, two of the lists specifically state Jacob was born in Germany.  One of them is displayed at the top of this post with the spelling Jacob Tablee.[3]New York Colonial Muster Rolls, Vol. I, p. 898, Jacob Tablee.

Also, according to some trees, Jacob’s father was Johan Georg Deibel, an immigrant from Germany who became John George Tablet in America.  A son named Jacob was listed in John George’s 1783 will.[4]New York, New York, Probate Proceedings, 1830-1865, John George Tablet will (1783), vol. 35, pp. 206-207; New York State Archives; Albany, New York; Records of wills and probates, 1665-1787; Series … Continue reading  This is not a line that I have looked at much recently, so this begs future resolution.

Neither Jo-Ann and I have any German in our ethnicity estimates, although her brother has 2%.

I began to wonder.  Is it possible that both statements are correct?  That is, could Jacob Tabele have been a Frenchman who was born in Germany?  Yes.  The confusion could result from the Tabeles being French Huguenots who escaped to Germany.  The timing makes sense.  If, as we suspect, Jacob Tabele arrived in New York City from Germany in the 1750s, his father or grandfather could have fled France at some point after Louis XIV issued the Edict of Fontainebleau in 1685 and began his persecution of the Huguenots.  We usually think of England and Holland as places to which Huguenots fled, but many also went to Germany.

Taking that one speculative step further – if we assume that Deibel was Jacob’s surname in the old country, it is interesting that the similar sounding surname Diball (also spelled Deeble, Dibald, Debold, and Dyball) is of medieval French origin and may derive from the French name Theobald.[5]See Surnamedb.com.

My Vermilyea Cousin in Fairbanks, Alaska
Scroll to top