I had the good fortune of connecting this summer with two distant cousins who share very rare surnames from my family tree:

A previous post told the story of my new Tabele cousin.[1]See it here.  This post discusses my new Wuhrlen cousin.

One of my biggest genealogical breakthroughs happened just last year.  I discovered in early 2020 that my Whaley ancestors were known in the Old World by the surname Wührlin.  They are an Alsatian branch of my Miller line.  4GG Lawrence Whaley (1796-1870) was originally Lorentz Wührlin from the small village of Hartmannswiller in Alsace, France.[2]The southern half of the historical territory of Alsace is today the Department of Haut-Rhin, also referred to as Department 68.  French departments are roughly equivalent to U.S. states.  He married Rosalie Rist (1801-1890) in Dannemarie, Alsace, France in 1823.[3]Dannemarie, Haut-Rhin, Alsace-Lorraine, “Etat-civil de 1793 à 1892,” mariages (weddings), Laurent Wührlin and Marie Rosine dite Rosalie Rist, 30 Dec 1823, p. 183-184, no. 11.  They emigrated to America in 1827.[4]“New York Passenger Lists, 1820-1891,” digital images, FamilySearch (https://www.familysearch.org : accessed 17 March 2020, manifest, S.S. Deux Ernest, 29 December 1827, roll 11, image 218 of … Continue reading 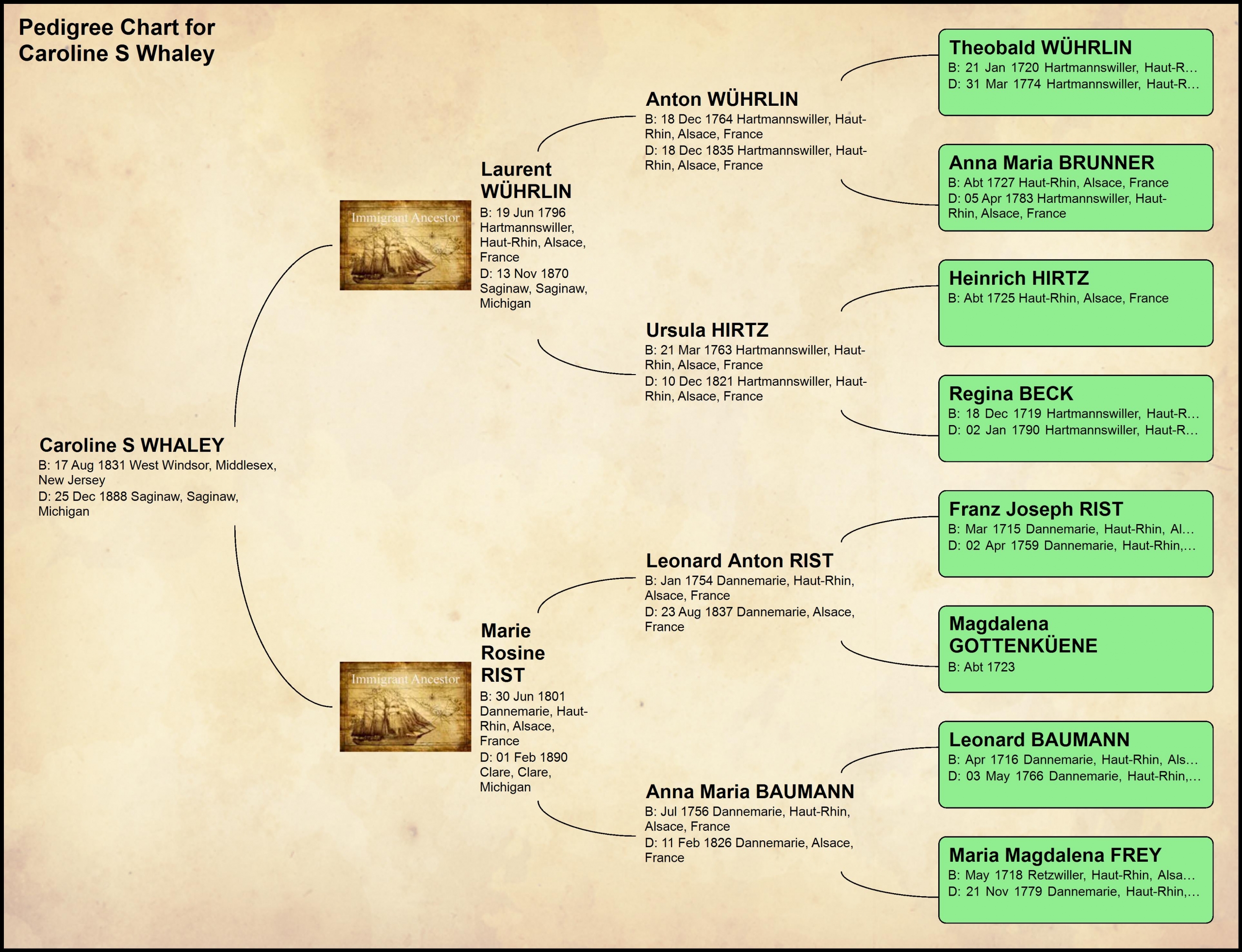 I learned about my new Wührlin cousin through MyHeritage, which notified me in August of a tree connection to a young lady in France.  Her last name is spelled Wuhrlen.  I immediately emailed her and have been sharing notes.  She’s my new best friend in Alsace!  Although we’re not a DNA match, our trees line up perfectly and her last name is clearly the same as my Whaley ancestors despite the spelling variation.

Female Cousin Wuhrlen does not know why her family uses the Wuhrlen spelling instead of Wuhrlin.  Her family believes the change occurred during one of the wars with Germany.  Less than 30 people use that spelling in France today.  I think several hundred use the Wuhrlin spelling.  In either case, we are talking about a rare surname.  Reportedly, the etymology is “the small dam at the edge of the woods.”  Very cool!

Female Cousin Wuhrlen and I are 9th cousins.  Our common ancestors are 8GGs Johann Wührlin (1643-1690) and Catherina Dietsch (1650-1707).  Johann was a linen weaver (tisseur de lin) in Hartmannswiller, the ancestral home of the Wührlin clan.  I am descended from Johann’s son Johann Theobald Wührlin (1688-1740) while my cousin is descended from Michael Wührlin (1675-1744).  The pedigree chart shown above goes back to 6GG Theobald Wührlin (1720-1774) who was a grandson of our shared ancestors Johann & Catherina. 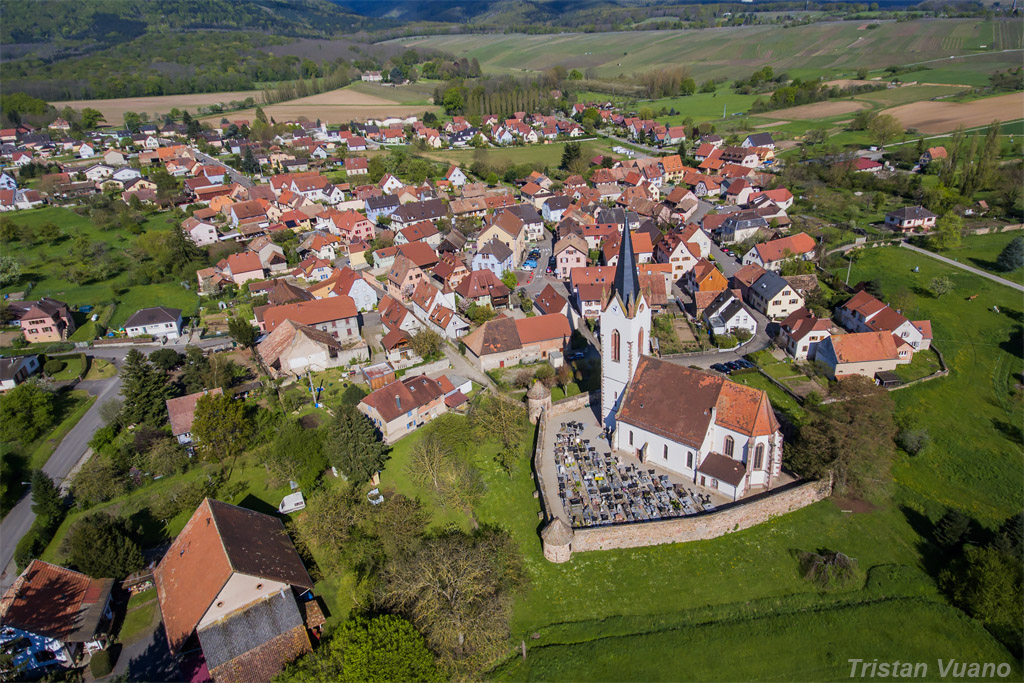 My new cousin still lives in Alsace.  I told her how my wife and I had planned a trip to Europe in 2020 that included four days in Alsace, but of course COVID killed those arrangements.  We still hope to get there though.  When I mentioned that, my cousin offered to show us the region and help us with the trip.  How generous!  This is further incentive to renew our vacation plans.  Next year is unlikely, but 2023 is a definite possibility.

We had found a very attractive AirBnB apartment in Colmar for the planned four days in Alsace; hopefully we can re-book that when the time comes.  Probably we will increase our time to 5 or 6 days because of the new cousin connection.  We’ll want to visit both Hartmannswiller, the cradle of the Wuhrlins, and Dannemarie, the cradle of the Rists.  According to my cousin, there are still Wuhrlins living in Hartmannswiller to this day.

Hartmannswiller looks like an amazing, scenic little village.  The nearby Hartmannswillerkopf, or Vieil Armand in French, is a small mountain peak where intense front-line combat occurred during World War I.[5]There is a short video at www.memorial-hwk.eu/en that provides wonderful aerial views of the battle memorial and military cemetery.  Over 30,000 soldiers died there.  As a result, 90% of the village was destroyed.  However, surviving structures include the 15th century fortified church (shown in two images above) and a number of quaint 16th and 17th centuries homes with lintel doors. 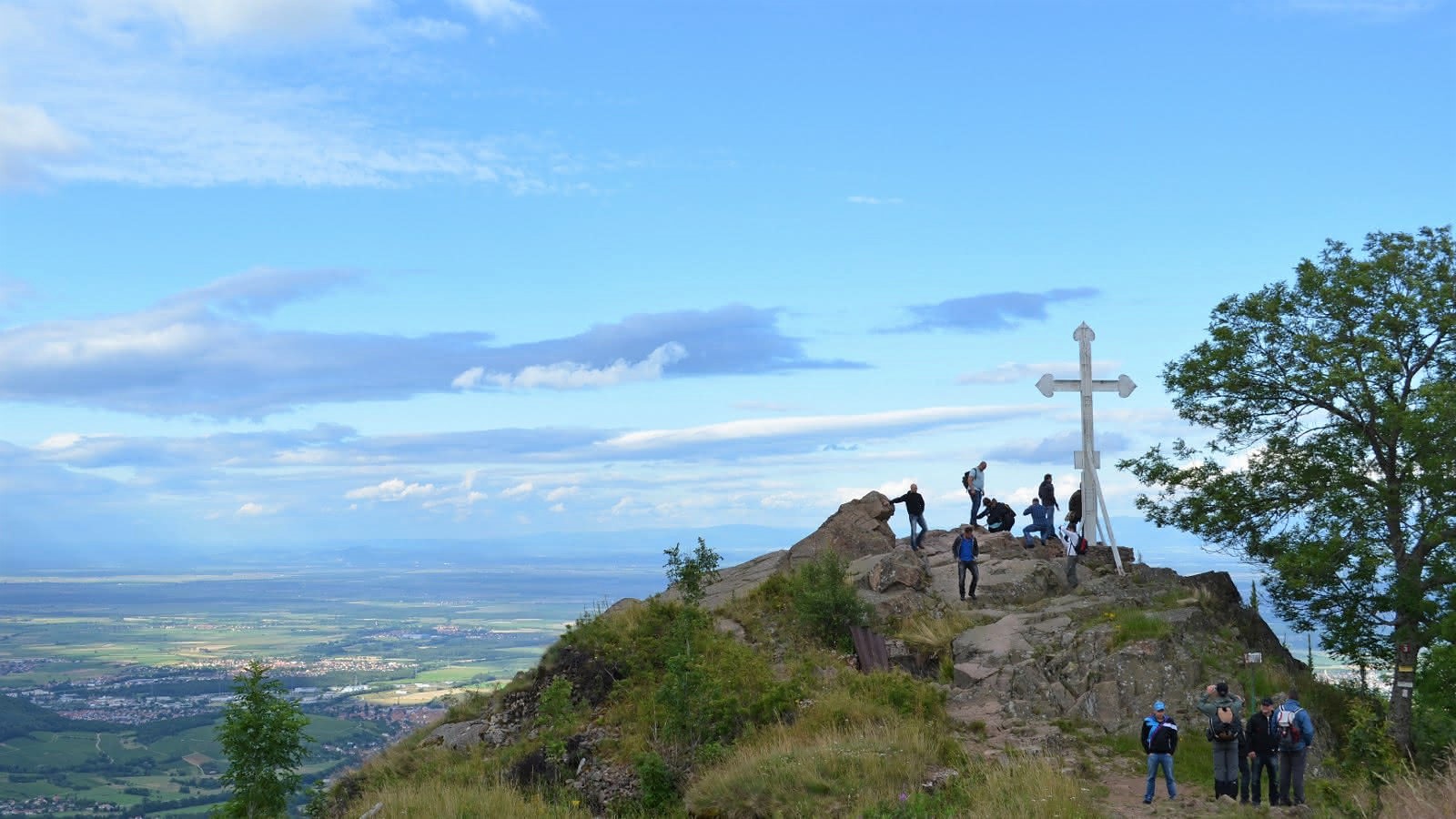 Another exciting thing about this new cousin connection is that my friend’s 5GG Francis Joseph Wührlin (1751-1825),[6]His name is Francois-Joseph in French. a winegrower, kept a journal for decades and drafted some genealogy notes, which still exist.  If I’m calculating properly, Francis Joseph would be my 2C7R (second cousin seven times removed).  As Female Cousin Wuhrlen explains:

“In 1804, he opened a family book (Haüssbüech) in which he recorded interesting things intended for his children’s education … He begins his book with a multiplication table, a scale for the price of wine, the calculation of interest, etc.  This is followed by advices on cellar care, wine conservation, recipes for improving it also for making wine.  We also find domestic remedies to cure diseases of men and animals.  Then, he recopies all the births of the members of the WUHRLIN family from the baptismal registers of the church of Hartmannswiller from 1584 to 1765. He writes the genealogy of the WUHRLIN (concerning his own ascendants only).  He inserts a story about his ancestor Jean LAWUHRLIN during the Thirty Years War (1618-1648) … Lastly, he begins a chronicle, year by year, from 1760 until September 7, 1825, the date of his death.”

Francis Joseph also penned a second Haüssbüech which takes up after the first one and includes additional information about Hartmannswiller history:

What a family treasure!  I would love to see these journals.

My Vermilyea Cousin in Fairbanks, Alaska