I mentioned in a previous blog post that Dorthe Eriksdatter Aaberge (1838-1938) is the oldest confirmed ancestor in our family tree.  Now I know why. 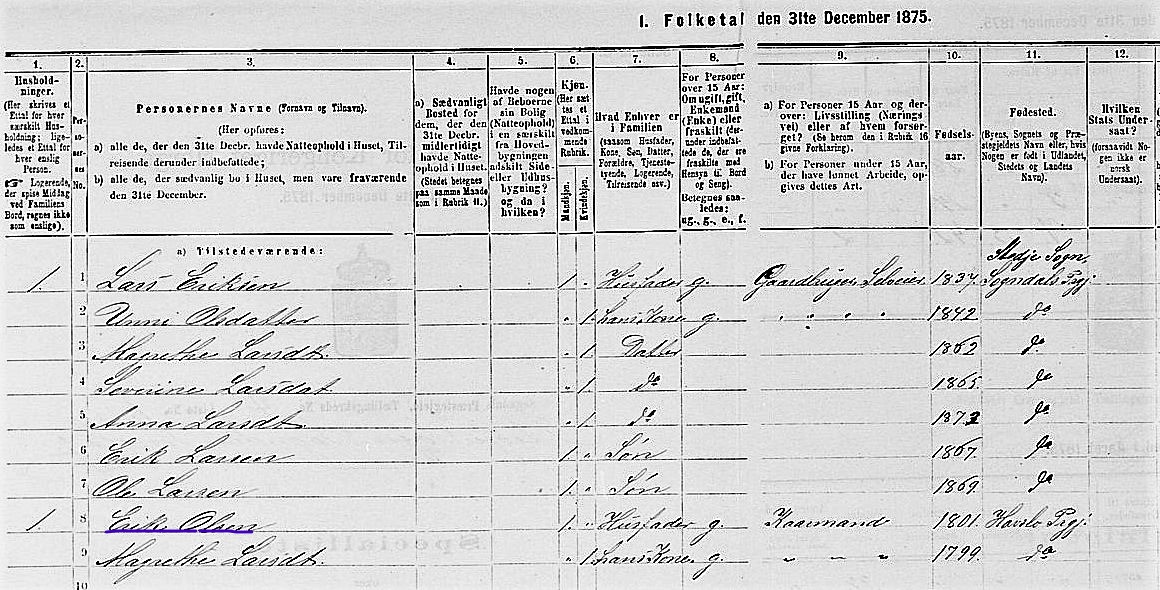 I decided to look into this more deeply.  I already knew Erik’s wife Margrethe died on 23 September 1882.[5]Sogndal Clerical District, Stedje Parish, Norway, Kirkebøker no. B 1, 1878-1899, s. 144, line 8, Margrethe Larsdtr Aabyrge; digital image, Digitalarkivet.no … Continue reading  I decided to double check the entry to see if she was listed as a widow.  Normally, a death entry would say if the deceased was a widow (enke), but in Margrethe’s case, it does not say that.

So I started browsing death and burial records in the 1880s in Sogndal Parish, but found nothing.  Then, I thought – well, maybe he somehow lived to the next big census in 1891.

He did!  The featured image at the top of this post is a portion of his individual page (personsedler) in the 1891 Census.[6]1891 Norway census, 1420 Sogndal Judicial District, Nordre Bergenhus County, population schedule, census district no. 3, house no. 34, s. 1649, Erik Olsen Aabyrge in household of Petter Pettersen … Continue reading  He is listed as a widower receiving care (vilkårmand), born 1801 in Hafslo, residing at Aabyrge Farm parcels lpn. 46haa and 43b with head-of-household Petter Pettersen (son-in-law) and Dorthea Eriksdtr (daughter), plus grandsons Lars and Erik Pettersen.  Erik Olsen would have been 89 years old in 1891.

Unfortunately, I have still been unable to find a death or burial record for Erik.  I perused the entire Sogndal and Stedje parish records for the 1890s looking for a death record and came up empty.  Erik is absent from the 1900 national census.  At least now, however, we know he lived to a very old age.

So, here you have three generations in a row living to at least 89 years old in a relatively poor area of Norway – obviously without access to modern medical services.  I don’t know what the statistical odds are of that happening but it is rare to see anyone living to 89 during that era, much less three of them in a row.  These were very hardy people.  I suspect there are some real longevity genes embedded in our Hafslo line.  It is even more impressive when you factor in their social and economic standing: both Dorthea’s father Erik and grandfather Ole were husmann (cotters or tenant farmers), so even within their own hardscrabble community they were among the poorer folk – at least up until Erik bought the Åbyrge farm in 1849.

(For more background on our Hafslo connection, see my blog post here.)

Berthe Mikkelsdatter Vikheim Emigrated from Norway in 1866
Scroll to top