We’ve talked a lot about Bertha Bonn, my great-grandmother, who immigrated to America in 1883 at the age of 17 and became a milliner in Montevideo, Minnesota.  (See blog posts here and here.)  In the family chart shown above, she is Bertha Pettersdatter Aaberge (1865-1936), her name at birth.

Berthe Mikkelsdatter Vikheim (1812-after 1880), the subject of this post, was Bertha Bonn’s paternal grandmother.  In fact, Bertha was named for this grandmother.  (It was customary in Norway to name the oldest daughter after the father’s mother and the second daughter after the mother’s mother.)  The link between the two Berthas was Petter Pettersen Aaberge (1835-1909), a photograph of whom is shown below.  I like to call him Abraham Lincoln!

We’ve always known that Berthe Mikkelsdatter was “married” twice, first to Petter Johannesen Aaberge (1808-1835) – my 3GG – and then to Johannes Ericksen Lereim (1809-1860).  Her first partner, a schoolteacher, died at age 26.[1]Sogndal Sokneprestembete, Ministerialbok nr. A 10, 1821-1838 (1420P), dead and buried, s. 264, Petter Johannesen Aaberge; digital image, Digitalarkivet.no … Continue reading  We don’t know why.  That union produced only one child: Bertha Bonn’s father – Petter Pettersen Aaberge.  He was born exactly one month after his father, Petter Johannesen, died.  It has crossed my mind that Petter Johannes may have committed suicide.  He and Berthe Mikkelsdatter were 1st cousins, once removed, and never formally married.  Their only child was the result of an out-of-wedlock relationship.[2]Sogndal Sokneprestembete, Ministerialbok nr. A 10, 1821-1838 (1420P), born and baptised , s. 69, Petter, son of Petter Johannesen Aaberge and pige Berte Mikkelsdtr Wichum; digital image, … Continue reading 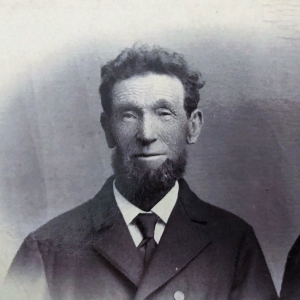 On the other hand, my Mother’s 2000 ancestry report on her Norwegian heritage states that Berthe and Petter were “engaged,” so it’s far more likely that Petter Johannesen simply died from a winter illness on 7 January 1835.  I think in rural areas in the old days in Norway there were a fair number of situations where people had children while engaged and before they were married in the church.

They were together for 24 years.  Johannes Ericksen Lerum died in 1860, so Berthe lost another partner.  Their daughter Anna, by the way, was Bertha Bonn’s half-aunt, with whom Bertha was living while attending millinery school in Minneapolis and before she moved to Montevideo.

I starting researching Berthe Mikkelsdatter again because my brother recently found in the holdings of our great-uncle Jack Bonn a beautiful hymn she wrote before she died.  (That will be the subject of the next blog post.)  When I brought her profile up in my family tree software, I noticed I had never determined when she died.  While searching for the death record, I discovered that Bertha appeared to have married a third time – in Minnesota!

That surprised me because I didn’t realize Berthe Mikkelsdatter left Norway.  The more I looked at the issue, the more it seemed like she must have moved to the United States.  For example, she disappears from Norwegian census and Sogndal parish records after 1865.  Also, in 1866, three of her Lereim children (Erick, Christie, Anna) immigrate to America, according to multiple U.S. census records.  Two of them (Erick and Christie) show at least one record that ties them to Wanamingo, Goodhue, Minnesota, which is where Berthe apparently lived.

However, I couldn’t confirm that the Berthe Mikkelsdatter living in Wanamingo, Minnesota was my ancestor, so I started looking at emigration and immigration records in Norway and the United States.  Unfortunately, 1866 is an unlucky year in Sogndal emigration record-keeping.  Of the two relevant online Sogndal parish repositories, one has not been transcribed yet and the other inexplicably jumps from 1865 to 1867.  Nor could I find anything in U.S. immigration records.

I then went to ship passenger records.  The very useful website www.norwayheritage.com lists many ships and passengers in its database, but I couldn’t find Berthe or her children.  Nor could I find her in online U.S. passenger list databases, including the Port of New York.

Finally, out of desperation, I decided to look at Canadian ship passengers because I knew that many Norwegian immigrants to Minnesota often sailed first to Canada before heading to the Midwest.  I opened up the online database Canadian Passenger Lists, 1865-1935 on Ancestry.com and began to look for a Berthe Mikkelsdatter born about 1812.

Lo and behold, there she was.  In the search results, she is listed simply as Britha, age 57.  I almost didn’t click on the entry because the age was off by three years and the name was not quite right.  Nor was there a patronymic listed.  But when I opened the image of the original document, it was definitely her.[4]“Canadian Passenger Lists, 1865-1935,” database online, Ancestry.com (http://www.ancestry.com : accessed 23 September 2019), entry for Birtha Mikkelsdtr Lereim, age 54, arrived Quebec, … Continue reading 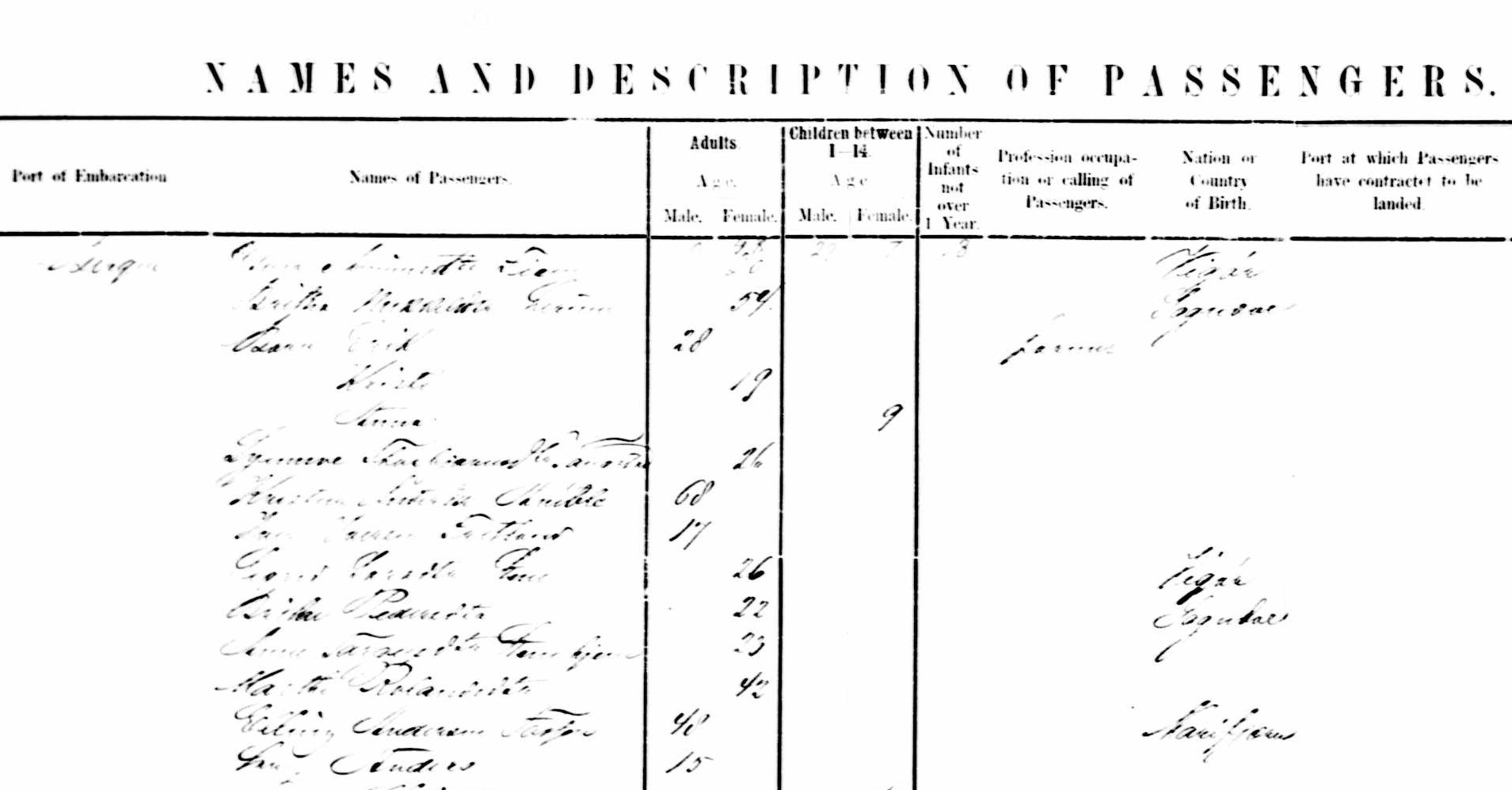 The writing is faded in the original document, which probably explains why her full name was not transcribed in the search engine.  But if you zoom in, the second entry from the top reads Britha Mikkelsdtr Lereim, although the last three letters of Lereim are somewhat ineligible.  Her age is listed as 54, not 57 – so that’s an error by the transcriber.   In the right hand column, it says she is from Sogndal.  Three children (barn) traveled with her: Erik, age 28; Kristi, age 19; and Anna, age 9.  The ages of the first two are correct but Anna was actually 16.  I suspect Berthe deliberately lied about Anna’s age to protect her on the voyage.

They traveled on the Dei Gratia, a bark rigged ship owned by a Norwegian company and navigated by Capt. E. Berg.  It left Bergen, Norway on 14 May 1866 and arrived in Quebec, Canada on 17 June 1866.  It carried 266 steerage and 29 cabin passengers along with a crew of 17.  It was probably a highly uncomfortable experience. 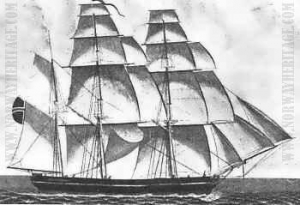 Norwegians flooded into America after the Civil War and conditions in steerage were typically horrendous.  It was so bad that Norway passed a law in 1869 trying to protect its citizens from unscrupulous ship lines.

She and Herman may have made a connection because they were both from the inner regions of the Sogn Fjord.  As a child, Herman was known as Hermund Hermundsen Høyum in Luster Municipality, not far from Sogndal; he settled at the Lindgjerde Farm as an adult.

Here then is the family group sheet for Bertha Mikkelsdatter Vikheim/Lereim/Hermanson: 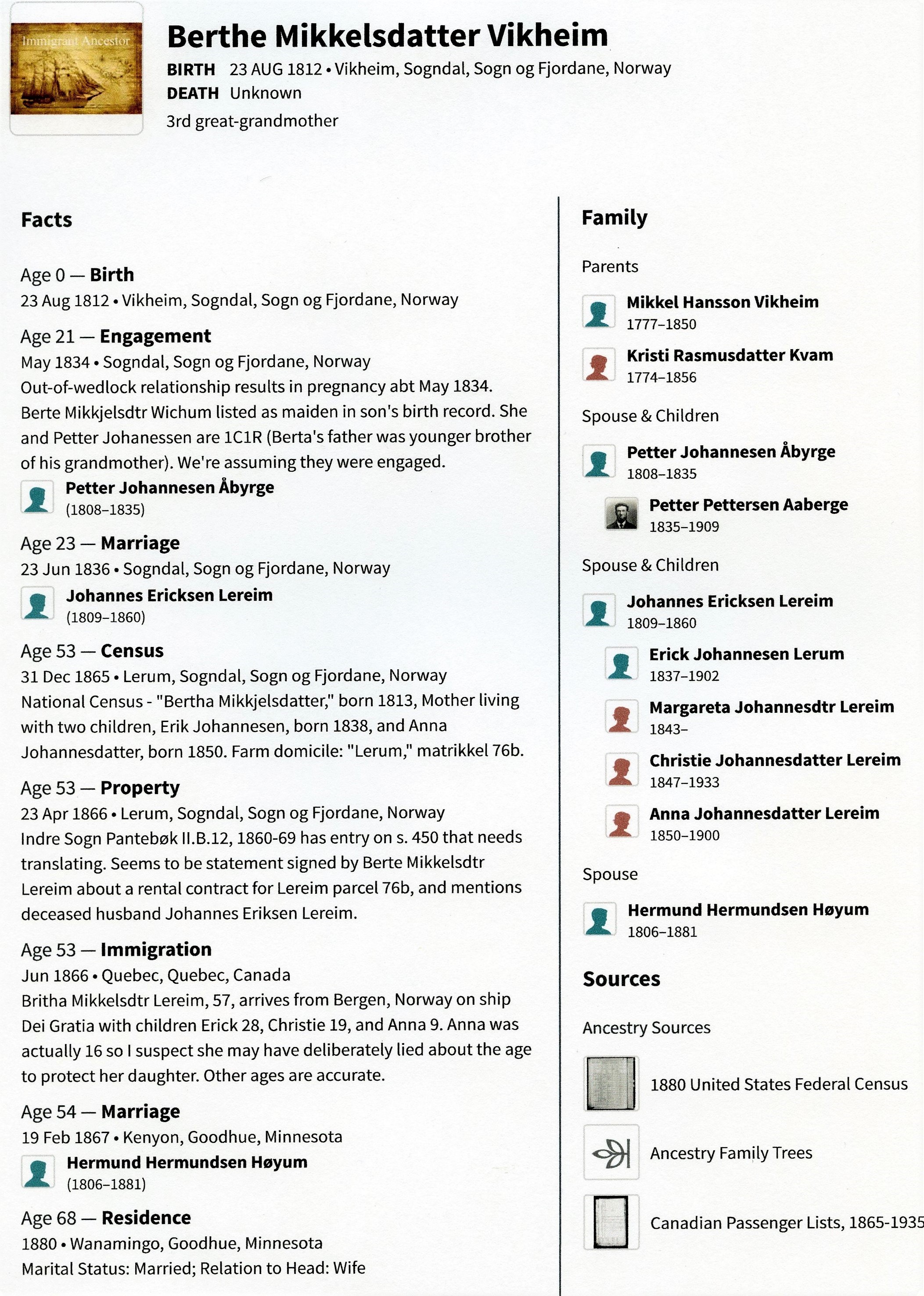 Despite all this research, I still cannot find a death record.  Herman and Bertha are enumerated together in the 1880 U.S. census in Wanamingo, Goodhue, Minnesota, but that is the last definitive record of her existence.[6]1880 U.S. Census, Goodhue County, Minnesota, population schedule, Wanamingo, Enumeration District 163, p. 349B, dwelling 181, house 17, Hermun Hermanson and Bertha Hermanson; digital image, … Continue reading  According to other family trees online, Herman died 11 December 1881 in Wanamingo, but I don’t see any sourcing.  Their son Erick is listed in the 1875 Minnesota state census in Wanamingo, but it’s not clear what happened to him after that.  There were several Erik Lereim/Lerums with various spelling combinations in Minnesota in the late 19th century.  Daughter Christie married Elling Albertson (1844-1925) on 2 December 1868 at Holden Lutheran Church and lived in Wanamingo until at least 1900.[7]Holden Lutheran Church (Kenyon, Minnesota), “U.S., Evangelical Lutheran Church of America, 1875-1940;” database online, Ancestry.com (http://www.ancestry.com : accessed 23 September … Continue reading   She bore nine children at a minimum and died 1933.  We should have a ton of Albertson cousins!  Anna married Peter Swenson in 1871; they lived in Minneapolis and had three children.  Peter was elected Sheriff of Hennepin County twice.

The fact that Berthe came to the United States makes me wonder if she and granddaughter Bertha Bonn ever saw each other on this side of the pond.  The grandmother would have seen Bertha as an infant in Sogndal just prior to emigration, but Bertha of course would have no memory of that.  Bertha was born 24 December 1865 and her grandmother left Norway in May 1866.  Bertha Aaberge arrived in Minnesota 17 years later in May 1883.  Was her grandmother still alive?  If so, we have to believe that she would have made every effort to visit her grandmother, especially since she was her namesake.  Another mystery yet to be solved!