Fourteen years later, their log cabin in Springfield Township, Ross County, burned to the ground.  It is possible that the fire occurred while Robert was away serving in the War of 1812, although that’s just speculation because of the timing and the fact that Robert served in the war.[1]Henry Holcomb Bennett, editor, The County of Ross: A History of Ross County, Ohio, from the Earliest Days, with Special Chapters on the Bench and Bar, Medical Profession, Educational Development, … Continue reading  The tragedy is that Grace’s family Bible was destroyed by the fire.  She possessed an old English Bible said to contain her Mason ancestry.  Gone forever.

Here is how grandson Nelson E. Jones described the event:

Grace … manifested the greatest sorrow one could well express in the loss of the souvenir she had so carefully preserved and protected from damage during the long and perilous journey to Ohio.  A large English Bible, printed in the infancy of the art, containing the family coat of arms and record for over four hundred years, with a chart of unbroken line of descent for near one thousand years.  All was lost in the burning of their cabin in 1812.[2]N.E. Jones, M.D., The Squirrel Hunters of Ohio, or Glimpses of Pioneer Life, p. 13, (Cincinnati: Robert Clark Co., 1898). 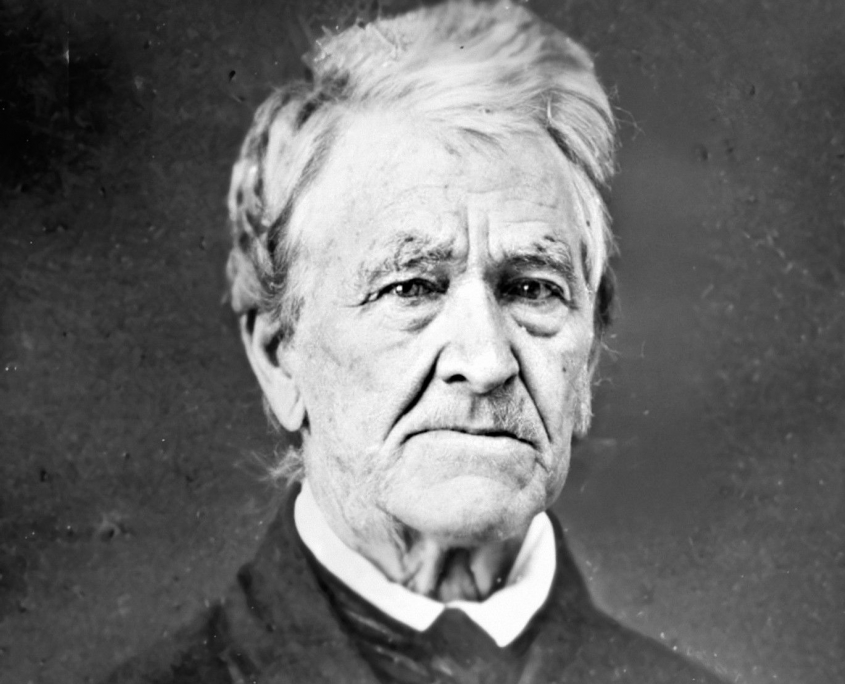 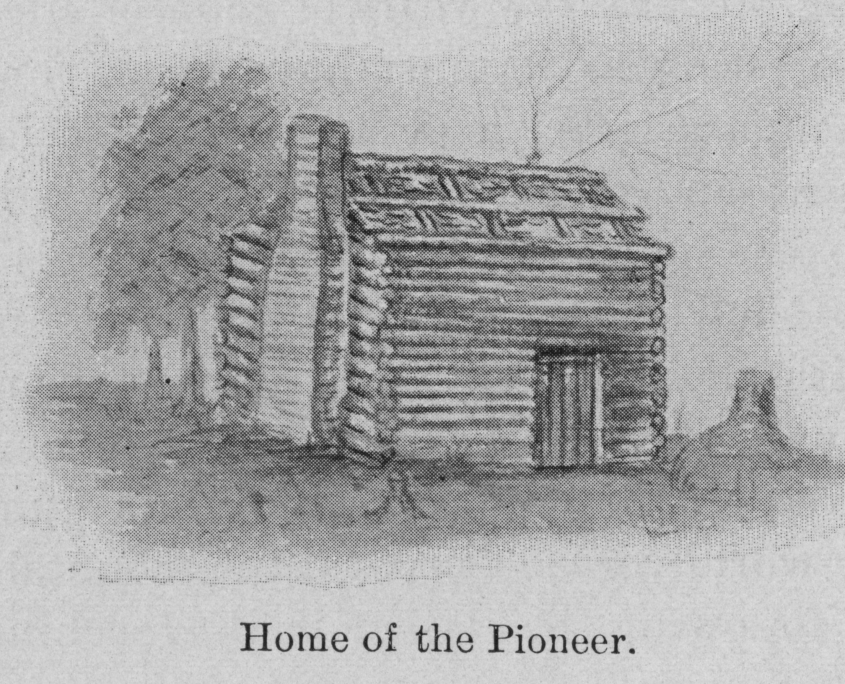 2) 1853 House Fire:  Young medical doctor, 2GG Nelson E. Jones (1821-1901), spent a considerable sum in the early 1850s building a two-story colonial house on 16 acres south of Circleville, Pickaway, Ohio.  This was part of a planned move from Londonderry, Ross, Ohio, 30 miles apart.  The family moved into the new home in the fall of 1853.  Daughter Genevieve Jones was 7 and son Howard Jones (1853-1945), my great-grandfather, just a baby at the time.  With cold weather coming, fireplaces were started, and due to a detective flue, the house burned down in the night.  Dr. Jones was not at home when the fire occurred.  As Howard reported many years later,

The nearest residence was nearly a mile away and Virginia Jones being alone in the house with the two children and a hired girl barely escaped.  The furniture and all possessions except a few pieces, which I have now in my office, were burned.[4]Howard Jones, “Personal Reminiscences,” p.3; unpublished essay, 17 August 1931 (Circleville, Ohio); loose-leaf copy, privately held by Steven Nelson Jonnes, Ashburn, Virginia [13 pages, … Continue reading

The house had been furnished by Virginia’s father, Cleveland grain magnate Anson Smith, with a high grade of mahogany furniture.  There was no insurance on the property and the loss was total.  The financial shock was tremendous.  In a discouraged frame of mind, Dr. Jones decided to move to Cleveland where his in-laws lived.  However, local residents took up a subscription amounting to about $3,000, led by Col. S. A. Moore, who personally donated $500, and at a town meeting, urged Dr. Jones to remain.  Circleville by then was 40 years old, and being one of the large towns of Ohio, had every indication of growing into a city.  So they stayed.[5]Howard Jones, “Personal Reminiscences,” p. 3-4. 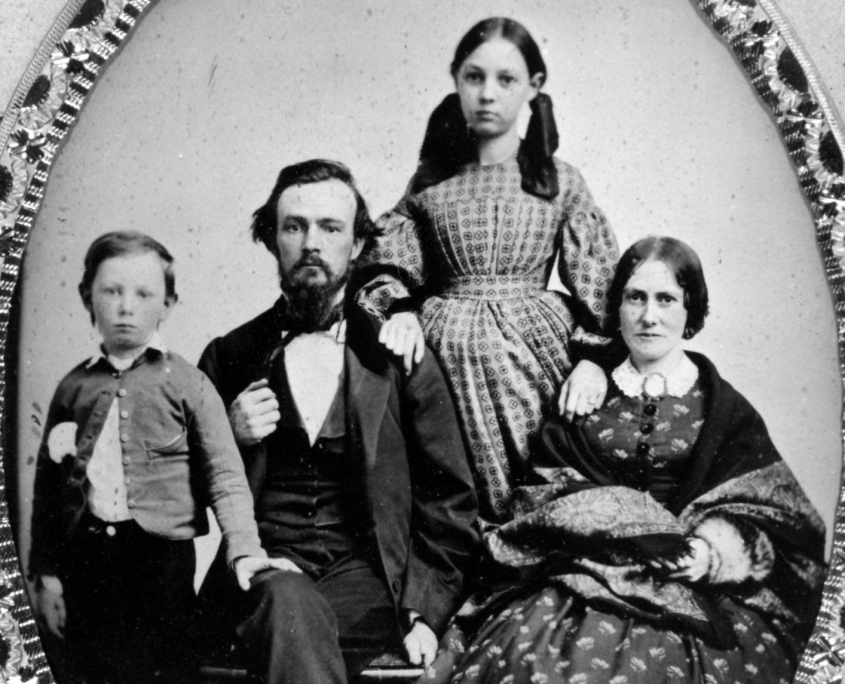 Subsequently, Dr. Jones built the brick building now located at 151 W. Main Street in Circleville, which the family moved into in 1859.  The family portrait above seems to have been taken about that time.

This imposing 15-room mansion with garden, cow pasture, tennis court and a marvelous porch around three sides of the house was the center of life for the Joneses for 55 years.  None of the Jones children ever really left home permanently.  All moved away from time to time but all returned and lived there or sent their children to live there, so that at one given moment one might find Ginny, or Eleanor, or Habe, or Lloyd along with Grandfather and Grandmother.  The grandchildren all considered Park Place their home at different times.[6]Nelson Jonnes, “Jonnes Family Record 1995,” 3rd edition, p. 9; unpublished manuscript, 1995 (Stillwater, Minnesota); bound copy #6 privately held by Steven Nelson Jonnes, Ashburn, Virginia. 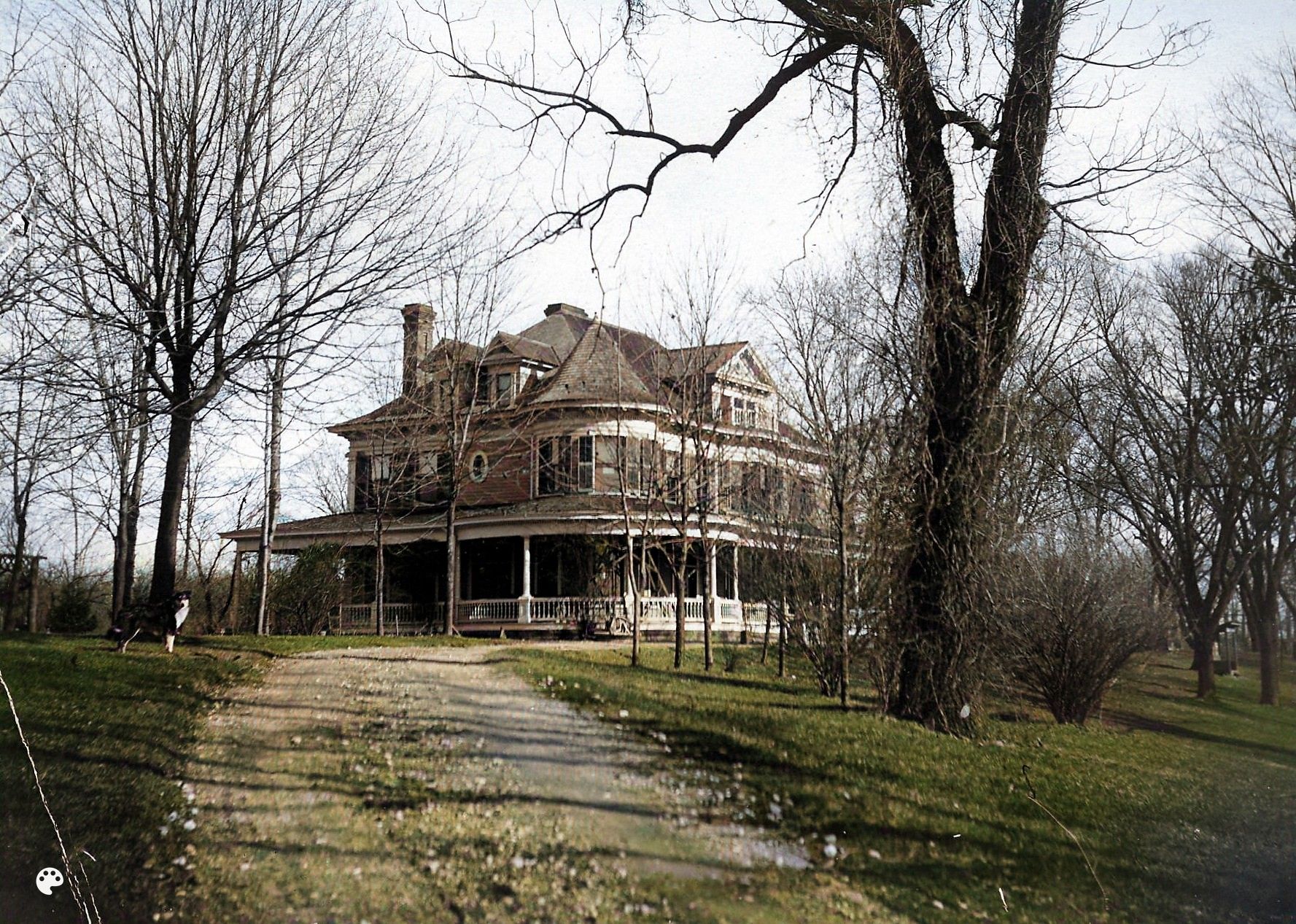 Patriarch Dr. Howard Jones died at age 92 in December 1945, only two weeks after finally living long enough to see that Lloyd Jonnes, his grandson, had in fact survived the war in Europe.

One year later, in December 1946, Park Place caught fire due to a faulty chimney and was a total loss, although no one was injured.  My aged great-grandmother, Mary (McMullin) Jones (1862-1951) and grandaunt Eleanor Jones were present in the house but got out safely.  Many family heirlooms and records were lost.

Here’s a newspaper clipping that describes the event: 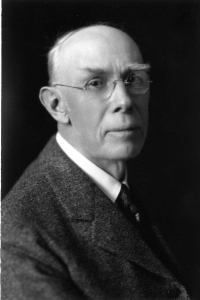 (Click on the newspaper article to view it more clearly.)