My grandmother Helen King Vermilyea (1909-1994) – aka Mrs. Helen Bonn – always said that we were related to Stephen Hopkins, one of the signers of the Declaration of Independence.

She was right!  At least that’s what a new genealogical source reports.  Grandma was uncannily accurate with her family stories.

A kind soul happened to see my blog and sent me an email.  She informed me that there was some information about my King family in an 1899 book entitled Portrait and Biographical Record of Leavenworth, Douglas and Franklin Counties, Kansas.

Fortunately, the book is available online, so I was able to pull up the text and immediately read the relevant portions.  The pertinent information was contained inside a short biography of a Leavenworth pioneer named Jason Powers Richardson.[1]Portrait and biographical record of Leavenworth, Douglas and Franklin counties, Kansas, rev. ed. (Chicago: Chapman Publishing Co., 1899), 159-160; digital book, Archive.org … Continue reading

Mrs. Richardson is a daughter of Henry and Jane (Dunlap) King, natives respectively of Wyoming County, N.Y., and Connecticut.  Her grandfather King, a soldier in the Revolutionary war, married a sister of Hon. Stephen Hopkins, the famous Quaker who signed the Declaration of Independence.  He was a pioneer in the western part of New York and planted the first orchard there.  Later he went to Ohio and then to Indiana, where he entered land for all of his fourteen sons.  Henry King, who served in the war of 1812, afterward engaged in farming in Medina County, Ohio, and from there moved to Milford, Mich., where he died at 57 years.  His wife, whose parents died soon after they settled in Ohio, died in Fulton, Stark County, when forty-three years of age.  They were the parents of five daughters and one son, of whom all are dead except two daughters.[7]Portrait and Biographical Record of Leavenworth, 160.

What’s gratifying about the new source is that some of the information matches extremely well with the hypothesis I had developed about Henry King and his family.  Although the names of two daughters remain unknown, I had concluded that Henry and Jane had five daughters and one son.  The new source says exactly the same.  The reference to Medina County, Ohio also matches my research because I found the Henry King family residing there in 1830.[8]1830 U.S. Census, Medina County, Ohio, population schedule, Hinckley Township, p. 228, Henry King; digital image, FamilySearch (https://familysearch.org : 9 March 2018), citing NARA microfilm … Continue reading

Of course, the new source is an authored narrative and thus is derivative information rather than original sourcing.  Local history books of this type were very popular in the late 19th and early 20th century.  Typically the authors would interview residents for biographical information or, in many cases, send out questionnaires.  Errors therefore can abound.  Although the book doesn’t say so, the source was almost certainly Mrs. Mary (King) Richardson herself since her husband died in 1882.  Mary was 67 years old in 1899 and lived to 1920, far longer than any of her siblings.[9]Kansas, State Board of Health – Division of Vital Statistics, Standard Certificate of Death no. 252-2702 (1920), Mary K. Richardson; database online, “Leavenworth , Kansas Death Index, … Continue reading 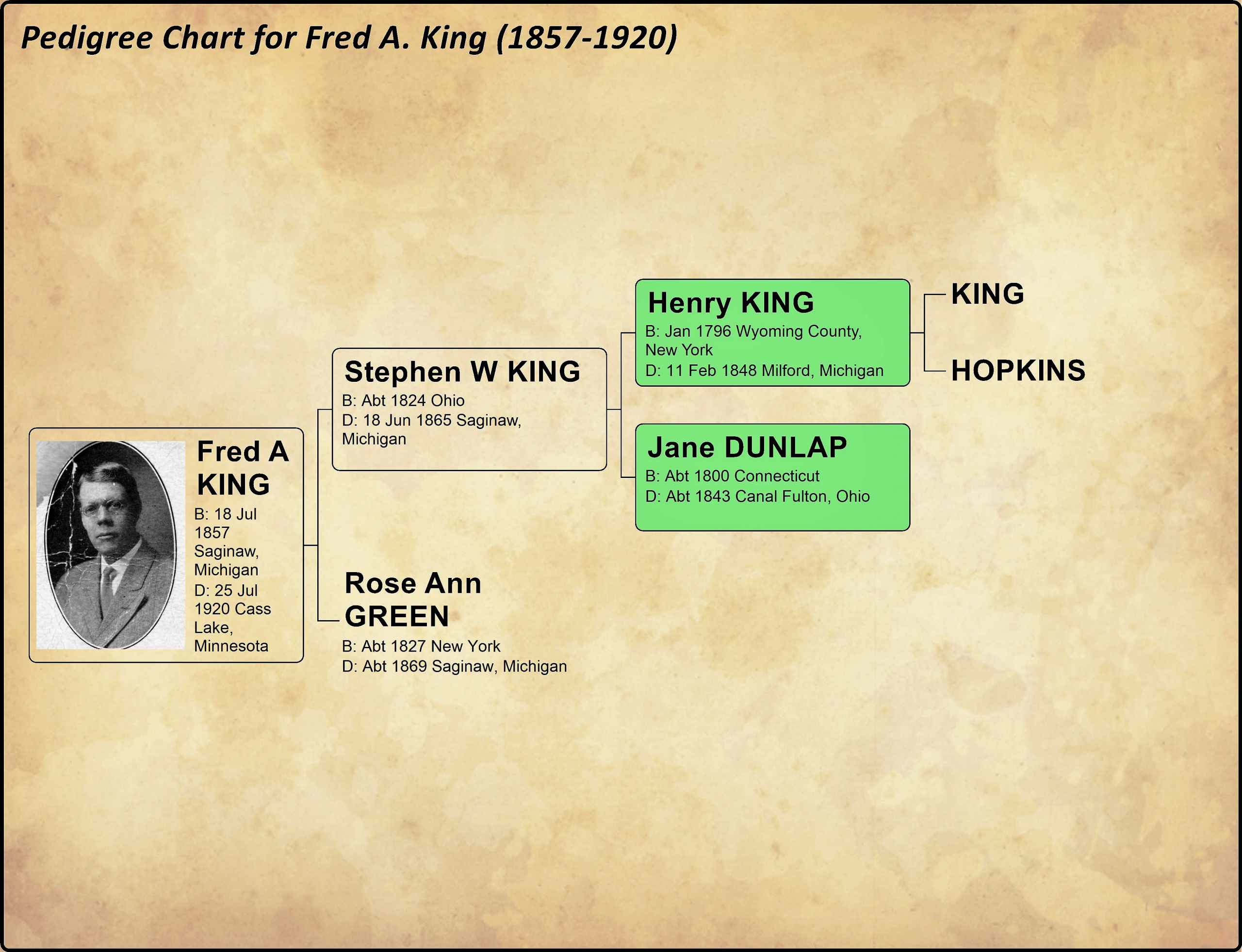 Although we have to double-check the information presented, the fact that the source comes from a daughter of Henry and Jane adds veracity.  Crucially, it corroborates the Dunlap maiden name for Henry’s wife Jane.  It also provides an explanation for the appearance of the Hopkins surname in Mrs. Helen (King) Terry‘s 1903 obituary.  The informant for the obituary, probably one of her children, must have been confused how the Hopkins name fit in.

Of course, the exciting thing is the specific allusion to Stephen Hopkins (1707-1785).  If true, we are not descended from Stephen himself but rather his parents, William and Ruth Wilkinson.  Stephen was a governor of Rhode Island and the chief justice of its supreme court.  He was a sufferer of palsy when he signed the Declaration of Independence in 1776.  He reportedly said as he signed, “My hand trembles, but my heart does not.”

I wonder now whether Henry King named his only son after Stephen Hopkins.

Despite the specificity and correspondence with known information, we still must be careful of the claim.  While Mary’s information about her parents is likely accurate, her information about preceding generations may not be as accurate, given the vagaries of time.  There is a strong desire to believe than one is related to a famous man and until we have proven the link, we must proceed cautiously.  What this does show, however, is that the King family believed in a connection to Stephen Hopkins even before my Grandmother was born.  So even if not true, Grandma reported what she heard accurately.

The narrative also provides many new data points, including:

Oh, how I wish Mary had also provided the first name of her King grandfather or her Hopkins grandmother!  Nonetheless these are great leads.

For example, the reported death of Jane Dunlap in Fulton, Ohio matches well to the King family timeline.  Fulton, Ohio is a town in Stark County (now called Canal Fulton).  The Henry King family was living in Stark County at the time time of the 1840 U.S. census, so both events occurred in the same county.[10]1840 U.S. Census, Stark County, Ohio, population schedule, Lawrence Township, p. 151, Henry King; digital image, FamilySearch (https://familysearch.org : 9 March 2018), citing NARA microfilm … Continue reading  Indeed, Jane died not only in the same county but in the same township where the family was residing.  Canal Fulton is situated in Lawrence Township, the locality where the family was enumerated in 1840.  The enumeration included a female aged 40-49 who is almost certainly Jane, so she was probably still alive on 1 June 1840, the date of the census.  We can hypothesize, therefore, that Jane died between the 1840 census and the family’s move to Michigan in 1844.  It may even have been her death that triggered the move.  At least now we know she was not buried in Milford, which I had wondered about.

Henry and Jane’s oldest child, Almira King (1817-1861) also resided in Stark County in 1840.[11]1840 U.S. Census, Stark County, Ohio, population schedule, Fulton town, p. 149, George Davis; digital image, Ancestry (https://ancestry.com : 9 March 2021), citing NARA microfilm publication M704, … Continue reading  She and her husband, George Davis, were residents of Canal Fulton.  It is possible, in other words, that Jane died at their house although she and Henry were residing on a farm outside of town.  The 1840 census enumerated those living in the town of Fulton separately from those living in Lawrence Township outside of town.

There is much to follow up on here.  Next research steps: