Last month, I reported finding new information about my King ancestry in an 1899 history of Leavenworth, Kansas.[1]Portrait and biographical record of Leavenworth, Douglas and Franklin counties, Kansas, rev. ed. (Chicago: Chapman Publishing Co., 1899), 159-160; digital … Continue reading  (See the post here.)  One of the bits of new information was a statement that Henry King (1796-1848) – my 4GG – was a “native of Wyoming County, New York.”  The source was very probably Mary King Richardson (1832-1920), one of Henry’s daughters.  Mary was 15 when her father died in Milford, Oakland, Michigan.  She later moved to Leavenworth, Kansas after marrying Jason Powers Richardson.

I figured Mary’s statement was accurate since she was Henry’s daughter.  However, Wyoming County, New York was not created until 1841, some 45 years after Henry was supposedly born there.  In 1796, the territory that became Wyoming County was part of Ontario County, a massive jurisdiction that covered all of western New York, and then became progressively smaller as other counties were carved out of it over time. 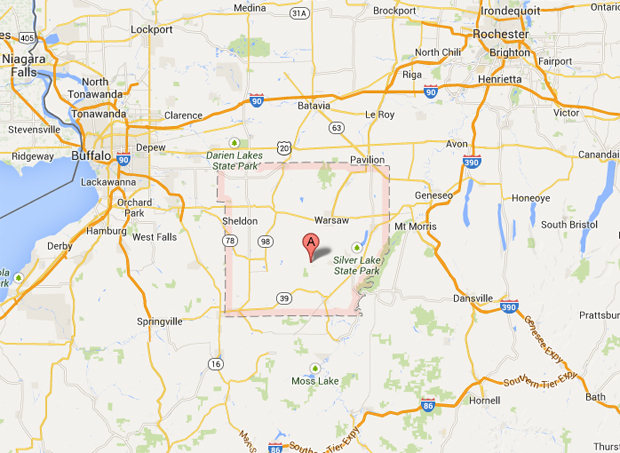 We could assume that Mrs. Mary K. Richardson knew this jurisdictional history and was simply identifying her father’s birthplace by its current location name.  That is a possibility, but a countervailing consideration is the settlement history of upstate New York.  The western reaches of New York were sparsely populated in the 1790s.  The threat of Indian hostilities did not end until the Treaty of Big Tree in 1797 and most settlers did not arrive until after 1801 when the Holland Land Company set up its sales office in Batavia.  No one with the last name King was enumerated in Ontario County, New York in the first U.S. census in 1790.  By 1800, six King households were enumerated there, but none resided in the area that became Wyoming County.

So where was Henry King born and why did his daughter Mary mention Wyoming County?

To answer that question, I’ve been trying to learn as much as I can about Henry’s life in northeast Ohio in the early 19th century and identify other family members.  Henry was a resident of Portage County, Ohio in the Connecticut Western Reserve.  He married Jane Dunlap there in 1816,[2]“Ohio, County Marriages, 1789-2013,” database with images, FamilySearch (https://familysearch.org : 12 March 2018), Henry King and Jane Dunlap, 10 September 1816, Portage County, Ohio, … Continue reading and tax and census records show that he lived in Northampton Township, Portage, Ohio from at least 1820 to 1825.[3]1820 U.S. Census, Portage County, Ohio, population schedule, Northampton Township, p. 45, Henry King; digital image, FamilySearch (https://familysearch.org : 9 March 2018), citing NARA microfilm … Continue reading  In 1826 or 1827, Henry moved his family 15 miles west to Hinckley Township in Medina County, where they remained for about a decade before moving to Stark County just to the south.  After Jane died in Canal Fulton, Ohio in the early 1840s, Henry moved to Milford, Michigan in 1844, where he died four years later.

It’s hard to tell if Henry was a victim of circumstances or just had itchy feet, but he sure moved around a lot! 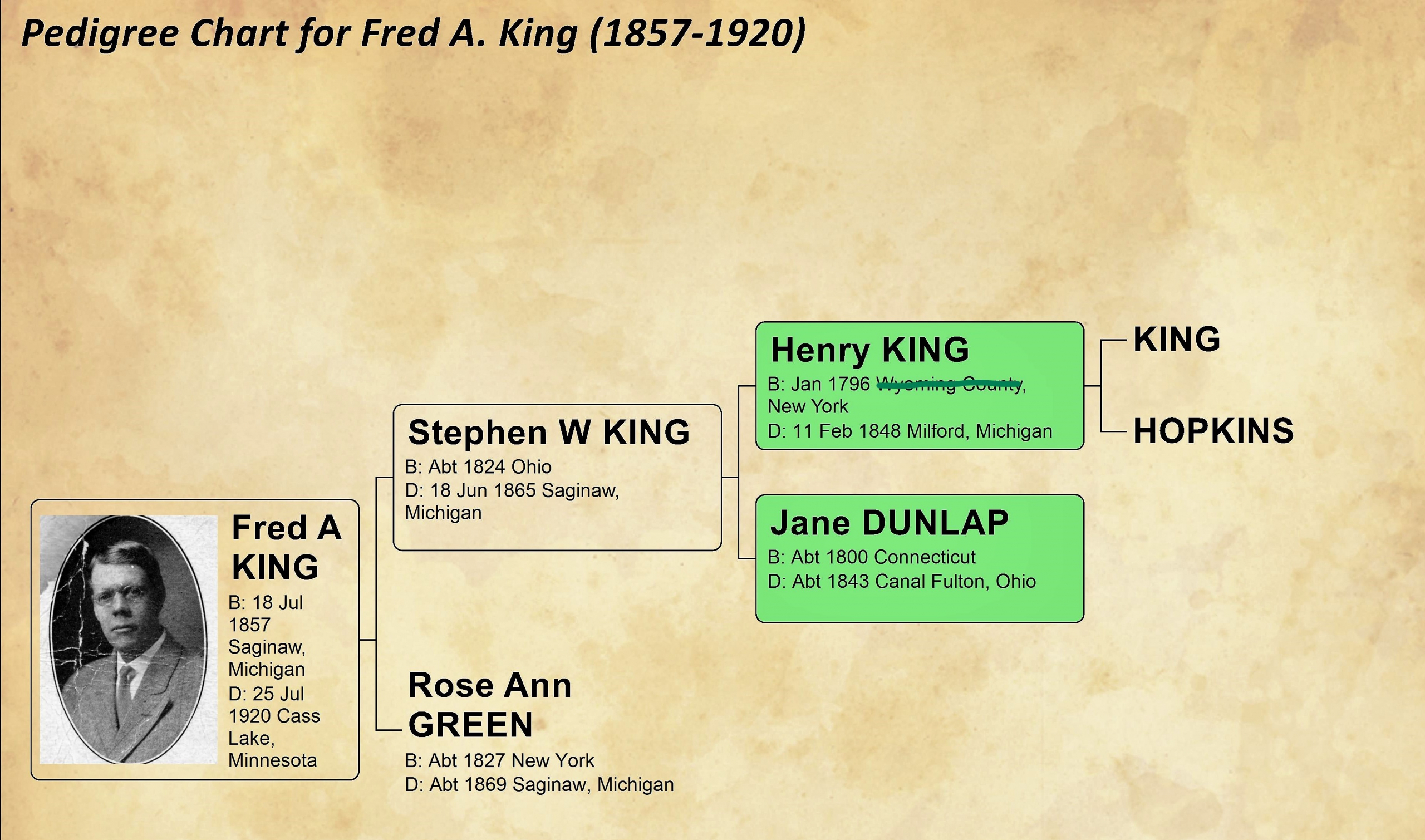 Mary K. Richardson reported that her father had 13 brothers.[4]Portrait and Biographical Record of Leavenworth, 160.  I haven’t found that many, but I am researching nine men who may be related to Henry who also lived in Portage or Medina counties during the relevant period.  Like Henry, some of them served in Darrow’s Odd Battalion during the War of 1812, for example.  The two key individuals are Samuel King and Joshua King, one of whom is probably Henry’s father.  They are described in local histories as early pioneers, arriving in 1809.[5]William Henry Perrin & A.A. Adams, History of Summit County, with an Outline Sketch of Ohio (Chicago: Baskin & Battey, 1881), p. 500.  I assume that is when Henry arrived as well.

But from where did they come?  Of the 10 men I am researching, only four lived long enough to indicate their birth state in federal enumerations.  (Birth location reporting began with the 1850 U.S. census.)

I was puzzled by the Pennsylvania association for Salmon since all the other evidence I had pointed to a New York origin for the family.  Salmon King’s federal enumerations for 1850, 1860, and 1870 consistently give Pennsylvania as his birth location, so it is unlikely that the reference was a mistake.[6]The three enumerations were viewed 14 April 2021: 1850 U.S. Census, Medina County, Ohio, population schedule, Hinckley township, family 533, dwelling 530, p. 348b, Salman King; digital image, … Continue reading  Were Salmon and Henry not brothers after all?

Rather coincidentally, a new DNA match popped up on AncestryDNA this month whose family tree goes back to Salmon King, and who triangulates with other King matches.  The fact that I genetically match to someone who is descended from Salmon helps to corroborate a genuine relationship. 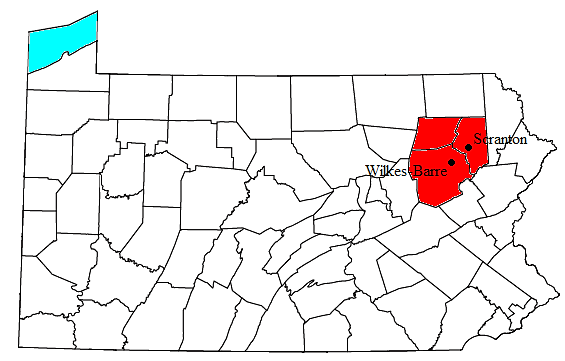 Wyoming!  Could this be the origin of Mary’s use of Wyoming?

Clearly, Samuel was older than Joshua.  They could be brothers separated by many years or father-son, or even uncle-nephew.  I tend to think father-son makes the most sense.

Other facts support the Pennsylvania connection.  Both Samuel and Joshua are absent from Luzerne County, Pennsylvania in the 1810 federal census, which complements our hypothesis that they moved to Ohio in 1809.  In addition, Lucy King, a known daughter of Portage County, Ohio, pioneer Joshua King, was born in Pennsylvania on 5 September 1800.[13]Findagrave.com, Find A Grave, database (https://www.findagrave.com : 10 April 2021), memorial ID 221750337 for Lucy King Dunn 1800-1881, Copley Cemetery, Summit County, Ohio. 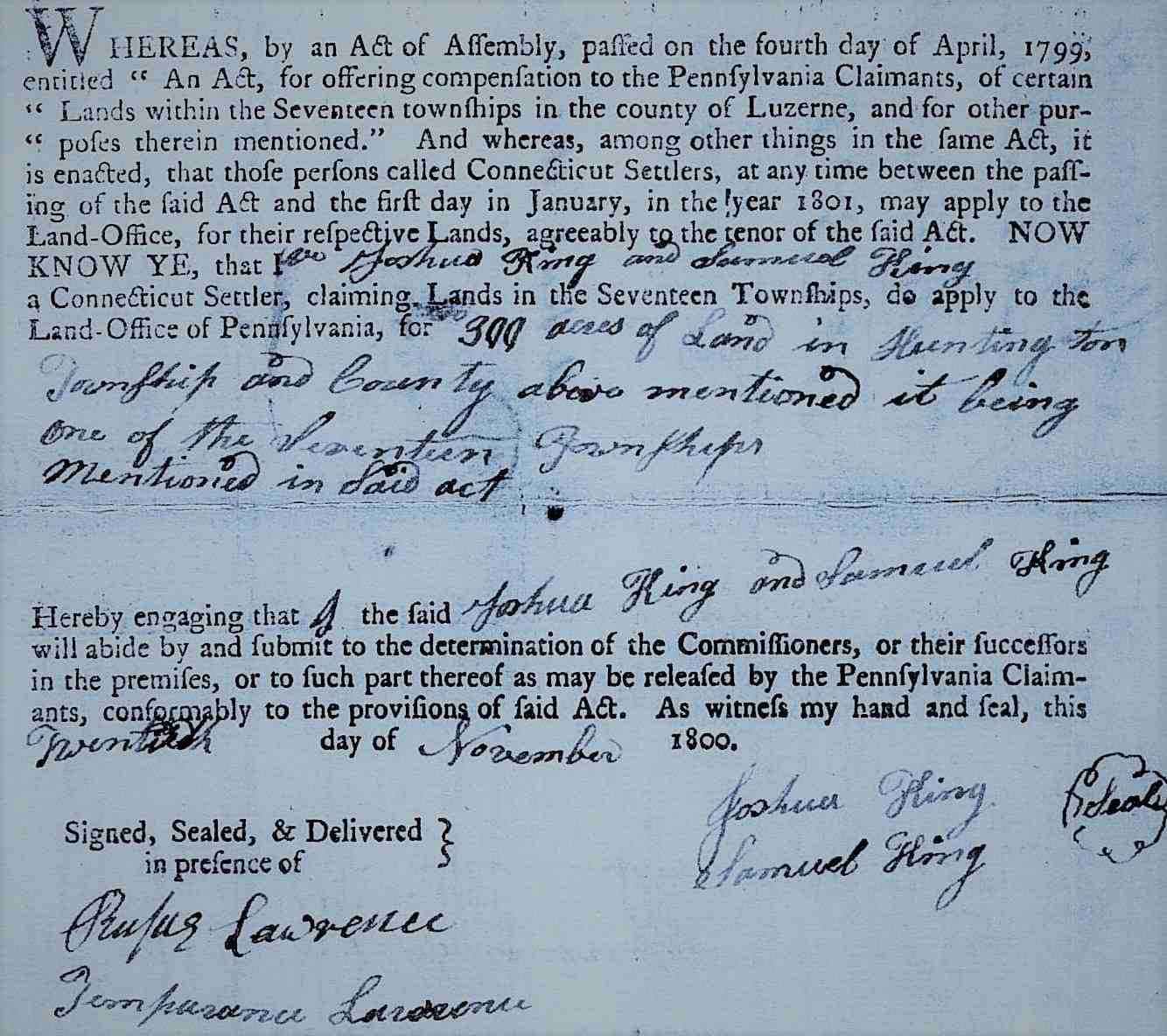 The reference to Connecticut Settlers may seem strange but actually makes historic sense.  The Wyoming Valley was claimed by both Pennsylvania and Connecticut in the 18th century.  This was made possible because both had royal charters for the territory from King Charles II.  Connecticut settlers formed the Susquehanna Company in order to settle the Wyoming Valley.  This triggered the Pennamite-Yankee Wars, lasting from 1769 to 1799.  It was a period of tremendous turmoil and suffering.  It’s an amazing bit of American history that I had never delved into before. 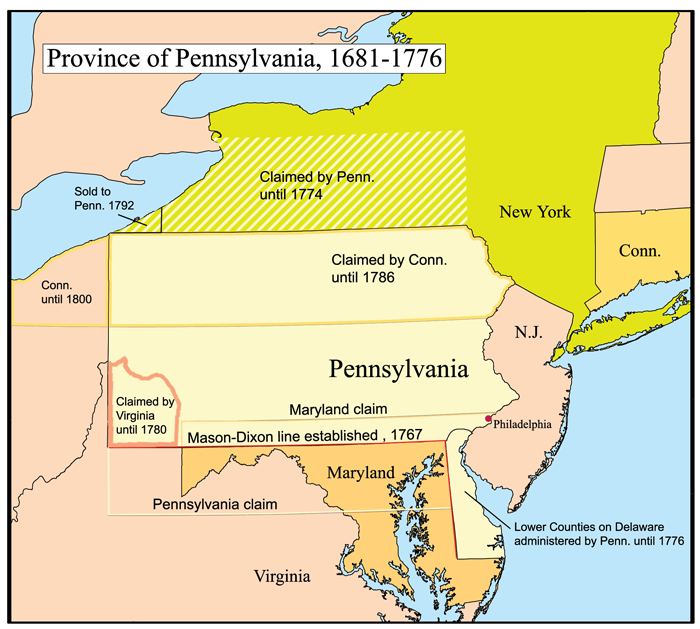 In 1778, for example, while many local men were away serving in the Continental Army, there was a massacre of approximately 300 Connecticut settlers by Loyalists and Indian allies of the British, called the Battle of Wyoming.  (The New England Historical Society has a good summary of the Pennamite-Yankee Wars here.)  Valley residents from Connecticut, with the active assistance of Gen. Ethan Allen, even attempted at one point to carve out a separate state.  The western state of Wyoming is named for the valley.

Applying for a land warrant in Luzerne County under the Compromise Act of 1799 strongly suggests a Connecticut origin for our King ancestors.  Samuel King may have been a Connecticut settler who occupied land in the Wyoming Valley under the auspices of the Susquehanna Company, was forced out and lived in New York for a time, and then came back to reclaim his land.  Alternatively, he could be an heir of someone who had settled in the Wyoming Valley.  I need to look into this further; I have only just begun to research Luzerne County. 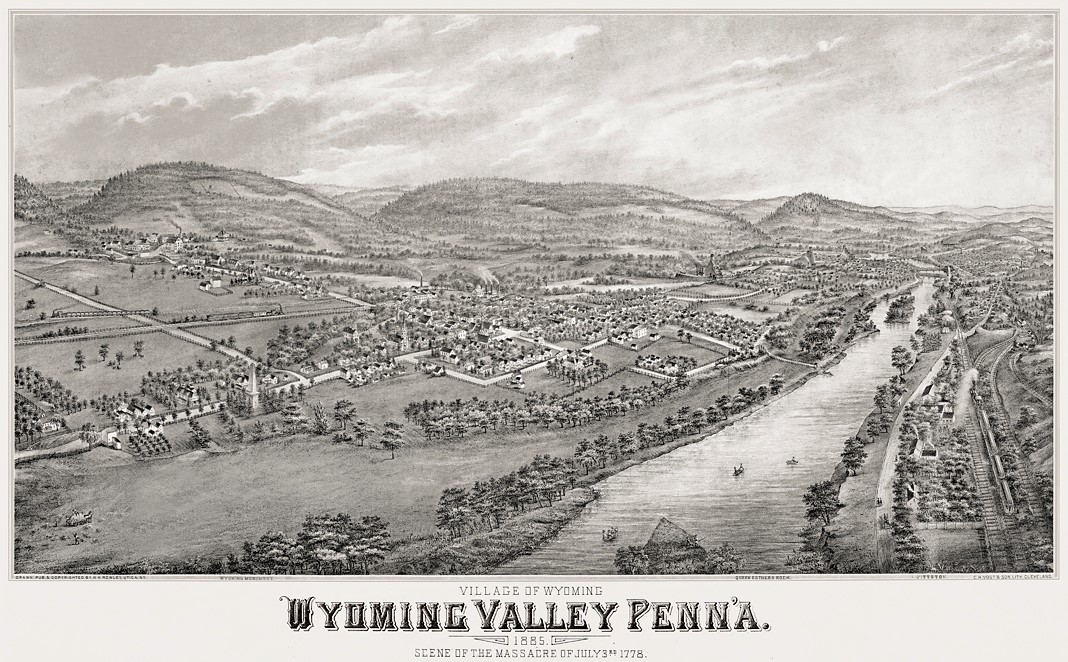 In summary, I believe Mary K. Richardson was incorrect in saying that her father was born in Wyoming County, New York.  She probably conflated memories of a place called Wyoming with her belief that Henry was born in New York.  But we can sympathize with her because it is still not clear where Henry King was born.  While Mary always said her father was born in New York, her sister Helen (King) Terry twice told census takers that Pennsylvania was her father’s birthplace.[17]1880 U.S. Census, Saginaw County, Michigan, population schedule, East Saginaw city, ED 306, p. 349B, dwelling 137, family 147, Ellen L. Terry in household of Arthur W. Terry; digital image, Ancestry … Continue reading  The contradiction may arise from Henry’s birth being so close to the time when the family moved from New York to Pennsylvania.  The earliest tax record in Luzerne County for Samuel King is 1796, the same year Henry was born.  That would argue for a Pennsylvania birth, but Samuel may have paid taxes on land he owned before actually moving there.  We have to remember that Ambrose King, described as Samuel’s son, was reportedly born in New York in 1798.[18]Three enumerations were viewed 14 April 2021: 1850 U.S. Census, Wyandot County, Ohio, population schedule, Eden township, dwelling 82, family 1264, p. 254b, Ambrose King; digital image, Ancestry, … Continue reading  In either case, Henry grew up in the Wyoming Valley as a child and then moved to Portage County, Ohio at 13 years old.

King-Hopkins Link Corroborated by a Family Reunion
Scroll to top