Like everyone else, the genealogy education industry has been dramatically affected by the coronavirus pandemic.  However, my impression is that it also adjusted to the new circumstances somewhat better than most organizations because remote learning has long had a prominent role in genealogy education.  FamilySearch’s annual RootsTech conference, for example, has always offered remote sessions, making it the largest family history event in the world.  The 2021 event, which is going on this weekend, is completely virtual for the first time.

Another example comes from my own experience.  Arguably the best genealogy course I ever took was Researching Nordic Ancestors in 2018, sponsored by the Salt Lake Institute for Genealogy (SLIG).  It was a virtual 10-week class.  Whatever expertise I have in Norwegian genealogy is primarily due to the outstanding instructors, Finn Karlsen and Jeff Svare.  I continue to consult the syllabus regularly. 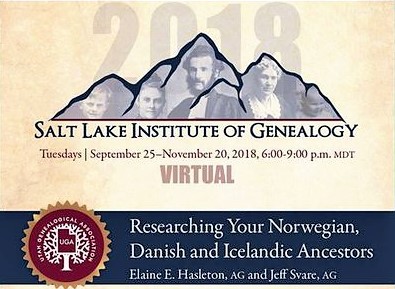 Of course, most conferences and courses were in person before the pandemic, but I’ve been impressed how genealogical societies and organizations continue to host events as remote learning has taken hold.  The National Genealogical Society, the flagship organization of American genealogy, will be hosting its annual conference as a 100% virtual event on May 17-21.  (It was scheduled to be held in Richmond, Virginia, which would have been easy for me to attend, so the cancellation of the in-person event was a disappointment.)

Another upcoming all-virtual conference is the 2021 International German Genealogy Conference, to be held 17-24 July.  The press release explains the details and how to register:  http://bit.ly/ registrationpressrelease.

I’m probably going to register for it, depending on summer plans.  I have several German ancestors, including:

Last year, I made surprising progress in the Alsatian half of my Miller line, as detailed in posts here and here.  But I’ve never done much research on 3GG Charles C. Miller (1822-1885), the German husband of Alsatian 3GG Caroline S. Whaley (1831-1888).  Charles and his brother Henry immigrated from the Duchy of Brunswick (Braunschweig in German) in the late 1840s.  In July 1850, they were enumerated as carpenters in Princeton, New Jersey.[1]1850 U.S. census, Mercer County, New Jersey, population schedule, Princeton Township, p. 10A, dwelling 119, family 132, Charles and Henry Miller in household of Aaron F. Allen; digital image, … Continue reading  Charles married Caroline in Princeton in December 1850.[2]“New Jersey, U.S., Marriage Records, 1670-1965,” database online, Ancestry (https://www.ancestry.com : 20 February 2021), Charles Miller and Caroline S. Whaley, 7 December 1850, Trenton, … Continue reading  Around 1853, they settled in Saginaw, Michigan, where Charles became a building contractor and sometime politician.  He was city treasurer for a short time while his brother Henry was sheriff of Saginaw for many years.

The Lukemire origins are shrouded in even more mystery.  There is some hint that the Lukemire progenitor, 4GG John Lukemire (1782-1863), may have come from the Province of Westphalia, but that is uncertain.   At least the later census records of his children state that he was born in Germany.  There has been speculation that he could be the son of a Hessian soldier but nothing definite has ever materialized.  This may be a brickwall that can only be knocked down through DNA matching.

The Tabele origins are also murky.  5GG Jacob Tabele (1739-1831) is the original immigrant and I have a lead suggesting that he may be from Mutterstadt, Germany (near Mannheim).  He was a resident of Manhattan and died there in 1831, age 91.  I previously reported on the Tabele family in this post here.

My 1961 Norwegian Penpal
Scroll to top