Just not at the same time!

In 2012, I obtained the Civil War pension file for 2GG Wesley Blalock (1825-1895) from the National Archives.[1]Wesley Blalock (Pvt., Co. K, 31st Ill. Inf., Civil War), pension no. Inv. 58388, Case Files of Approved Pension Applications …, 1861-1934; Civil War and Later Pension Files; Department of … Continue reading  It revealed that a decade before the Civil War, Wesley had an earlier marriage that was previously unknown.  Despite extensive research by my father over many years, he never knew about Wesley’s first wife or their child.

Wesley Blalock enlisted in the Union Army in August 1861 in Centralia, Illinois, and served in Company K of the 31st Illinois Infantry Regiment led by Col. “Black Jack” Logan.[4]Logan later became a Union general and subsequent to the Civil War, a U.S. senator from Illinois and unsuccessful Vice Presidential candidate in the 1884 election.  Logan Circle in D.C. is named … Continue reading  He saw action at the battles of Belmont and Ft. Henry, engagements led on the Union side by Gen. Ulysses S. Grant.  During his third battle, the Union assault on Ft. Donelson in February 1862, Wesley was shot in the left knee during a Confederate attempt to break out of Grant’s siege.  He was removed from the battlefield and ended up at a Union hospital in Cincinnati, Ohio.

Wesley remained in southern Ohio the rest of his life.  In November 1864, he married Harriet Kennelly (1835-1906) in Clermont County, Ohio, about 30 miles east of Cincinnati.  Two daughters were subsequently born there: Cedelia Blalock (1865-1929) and my great-grandmother Centrilla Blalock (1868-1921).[5]My father always said that Centrilla was named after Centralia, Illinois where her father enlisted.

The gunshot wound crippled Wesley for life.  His pension file is particularly rich because of this medical condition and the bureaucratic disagreements over his degree of disability.

The map below shows the major events in Wesley’s life.  The green markers indicate places he resided and the purple markers represent Civil War-related events.  Click on each marker for additional information.

The Discovery:   A key document in Wesley’s pension file is an affidavit filed after his death in 1895 by his sister, Mrs. Rebecca Taylor of Caseyville, St. Clair, Illinois.  It attests to a two-year marriage between Westley Blalock and Anna Holloway, commencing on 30 August 1850 and ending with Anna’s death on 5 October 1852.[6]“General Affidavit” of Mrs. Rebecca Taylor, 11 September 1895, aged 68, residing Caseyville, St. Clair, Illinois, in Harriet Blalock’s widow pension application no. 610456, certificate no. … Continue reading  Mrs. Taylor was responding to a request by Wesley’s widow, Mrs. Harriet Blalock, to certify that Wesley’s first wife was deceased, so that Harriet and not some other spouse was eligible for the pension.  The affidavit was successful because Harriet began receiving pension funds shortly thereafter. 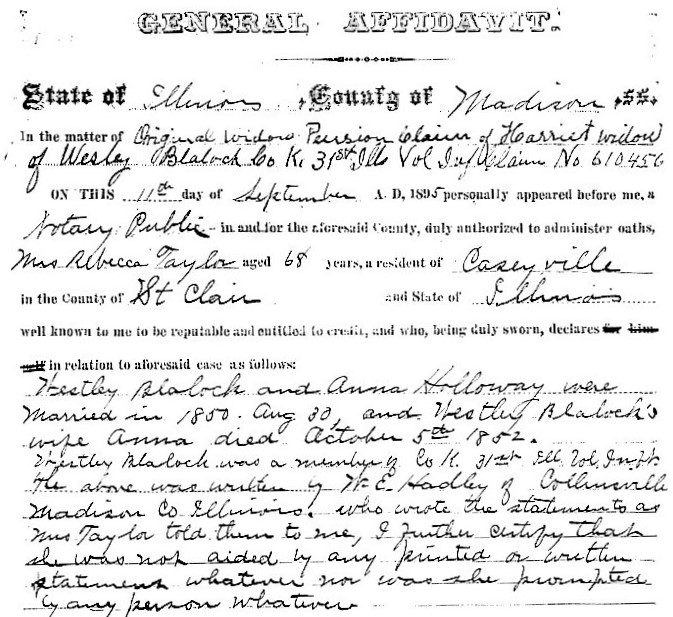 Two months after the wedding, Wesley Blalock was enumerated in the 1850 U.S. census as a laborer on a farm owned by Isaac Lemon in the vicinity of Collinsville, Illinois.[8]1850 U.S. Census, Madison County, Illinois, population schedule, Township 3N Range 8W, p. 530B, dwelling 146, family 146, Wesley Blalock in Isaac Lemon household; digital image, Ancestry … Continue reading  Anna was not enumerated with him, which is odd.  Possibly Wesley was engaged in itinerant or seasonal farm work.[9]I have been unable to find Anna in the 1850 U.S. census, a mystery in itself.

Two years later, Wesley and Anna gave birth to a baby girl they named Laura.[10]“Illinois, Deaths and Stillbirths Index, 1916-1947,” database, Ancestry (https://www.ancestry.com : accessed 16 February 2018), entry for Laura Gower, Collinsville, Madison, Illinois; citing FHL … Continue reading  Laura A. Blalock (1852-1918) was born 22 September 1852.  As we’ve noted, her mother died 14 days later.[11]“General Affidavit” of Mrs. Rebecca Taylor, 11 September 1895, in Harriet Blalock widow pension no. 415476, RG 15, NA – Washington.  We have no information about the cause of death but can surmise that the birth was difficult and led to Anna’s death.  As far as is known, there were no other children by this marriage.  However, Laura survived, bore many children, and lived to the age of 65.

One year later, Wesley enlisted in the Union Army and the trajectory of his life was completely altered.  The war wound led him to Cincinnati, Ohio, and thereafter to Williamsburg, Clermont, Ohio, where he died in 1895, age 70.  He probably rarely if ever saw Laura again.[14]He may have visited her on his one known trip back to Illinois.  Wesley’s honorable discharge papers were lost when his trunk was stolen at a boarding house shortly after release from the … Continue reading

Laura Blalock, on the other hand, lived in Collinsville the remainder of her life.  On 24 August 1869, at the age of 16 – one month shy of her 17th birthday – Laura Baylock married Lemuel William Gower in St. Louis, Missouri, across the river from Collinsville.[15]“St. Louis, Missouri Marriages, 1804-76,” database, Ancestry (https://www.ancestry.com : accessed 11 February 2018), entry for Lemuel W Gower – Laura Baylock, 24 August 1869, St Louis, … Continue reading  It may be suggestive that she married so young.  If she was being raised by someone other than her father, she may have been anxious to become independent.

Mr. and Mrs. Gower remained a couple for 36 years, raising at least seven children who made it to adulthood.  William Gower, as he was known, was a Civil War veteran who became a farmer, day laborer, and finally coal miner.  He died in 1906.[16]Findagrave.com, Find A Grave, database (https://www.findagrave.com : 14 February 2018), memorial ID 18796207 for Pvt William Gower 1841-1906, Glenwood Cemetery, Collinsville, Madison, Illinois.  Laura Gower lived another 12 years as a widow and died 26 February 1918.[17]“Illinois, Deaths and Stillbirths Index, 1916-1947,” database, Ancestry, entry for Laura Gower.  The death certificate records her father’s name as Wesley Blalack, further confirming the relationship.[18]Ibid.

All but one of Laura’s children became coal miners or were married to coal miners.  This is due to the proximity of the O’Fallon Quadrangle in St. Clair County, a major coal field in the late 19th and early 20th century.  None of the seven Gower children moved away; all resided in southwestern Illinois their whole lives.

By my rough count, Laura had at least 19 grandchildren, so there should be a lot of descendants for me to match to genetically.  Because Laura A. Blalock and I share a common male ancestor, Wesley Blalock, but not a common female ancestor, her living descendants and I are Half Cousins.  In checking my DNA matches, I found three such cousins.  Two are descended from Laura’s daughter Mary Ella and one is descended from Laura’s daughter Ollie.  All are half-third cousins of various sorts (e.g., 3C, 3C1R, 3C2R).

The 1895 pension affidavit proves that Wesley Blalock’s second wife, Harriet, knew about her husband’s first wife despite the gap of 14 years between the marriages.  One wonders, however, if they ever informed their two daughters.  Did Cedelia and Centrilla know they had a half-sister in Illinois?  Maybe Wesley and Harriet were uncomfortable about the circumstance and never mentioned it.  In that same vein, did my grandmother Barbara Lukemire (1899-1974) ever know that she had seven Gower half-first cousins in the East St. Louis area?

In February 2013, I asked my uncle, Lloyd Jonnes, whether he was aware of these cousins.  He said no.  He had never heard of them and did not recall his mother Barbara ever mentioning them.  Of course, Barbara was famously circumspect so even if she knew she may never have said anything.