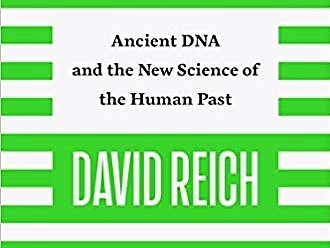 Prof. Reich is one of the world’s leading researchers of ancient human DNA.  His Harvard laboratory collects ancient DNA samples and compares them to current populations to understand and interpret the deep history of mankind.  His lab and Svante Paabo’s lab in Leipzig, Germany – the Max Planck Institute for Evolutionary Anthropology – are the two primary centers for ancient human DNA analysis.  Their relationship is close because Reich worked for Paabo for six years and the two labs continue to cooperate.

This is brand-new science and the available data is exponentially growing.  Keep in mind: the first ever genome of an ancient human was analyzed only as recently as 2010.  Up until 4 years ago, the number of ancient H. Sapiens genomes recovered and analyzed was still less than 50.  But that has changed utterly since 2015.  Today, as the accompanying chart shows, Reich’s lab alone has published 2,030 ancient human genomes and is processing more than another 5,000. 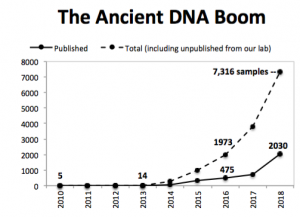 Reich writes extremely well and avoids academic jargon.  Although somewhat technical in spots, I found the book eminently understandable.  Reich begins in Part I by giving an overview of the history of hominid DNA research and explains the new technologies and techniques which are allowing DNA labs to conduct mass-production analyses.

In Part II, which is the heart of the book, Reich conducts a tour of the world to discuss the current state of our understanding of ancient human population movements based on the new DNA data.  There are chapters in this section on Europe, India, Native Americans, East Asia, and Africa.  Each of these chapters is an amazing summation of what we know (and still don’t know) about the very early history of these regions.  I found the chapters on India and East Asia particularly fascinating since these are relatively new areas of discovery and little has been said about them before.  For example, India apparently has an extremely complex DNA profile, based partly on the influx of multiple ancient populations, but also because a number of local populations have been practicing endogamy for centuries.  As a result, India’s genetic diversity is likely the greatest in the world outside of Africa.

This book goes into my personal hall of fame for evolutionary anthropology, alongside such previous classics as Before the Dawn (2006) by Nicholas Wade,[2]Nicholas Wade, Before the Dawn: Recovering the Lost History of Our Ancestors (New York: Penguin Press, 2006). Masters of the Planet (2012) by Ian Tattersall,[3]Ian Tattersal, Masters of the Planet: The Search for Our Human Origins (New York: St. Martin’s Press, 2012). and Ancestral Journeys (2016) by Jean Manco.[4]Jean Manco, Ancestral Journeys: The Peopling of Europe from the First Venturers to the Vikings (New York: Thames & Hudson, 2nd edition, 2016).