During last month’s first-ever trip to Norway, one of my main goals was to drive around the village of Bøn in Eidsvoll Municipality to find ancestral farms.

The village of Bøn is located at the intersection of roadways 505 and 506.  The area highlighted in yellow in the middle of the map (and outlined in green) is the original, central Bøn Farm.  It is designated as Property No. 138, Parcel No. 1 (138/1), in the Norwegian land registration (matrikkel) system.  It was known as Øver-Bøn in past years.  Below are two images of the farm today.  Bøn Gaard on the side of the barn means Bøn Farm.  No one in our family lived there as far as we know, but it is important to note its location and history as a reference point. 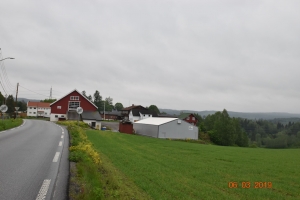 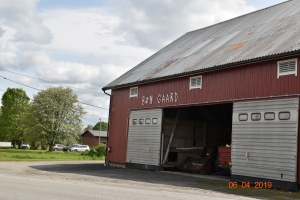 About 400 yards east of the Bøn farmhouse is the historic Bøn Station.  It sits on the other side of the Andelva River, just off roadway 505.  You can see the Bøn name on side of the building.  Train service was discontinued in 2004 but the building has been preserved.

Finding the property called Bønsmoen where Ole & Dorthea lived, however, gets complicated.  We know it was a sub-division of Farm No. 138, the main Bøn farm, but which sub-division and where that was located in the late 19th century is not so easy to determine.  There are several complicating factors.  First, the number of sub-divisions, or parcels, has grown dramatically over the past 200 years.  In the 1801 census, there were only 4 divisions of the Bøn Farm.  By 1865, there were 14 parcels.  By 1886, there were 44!  Some of these parcels have now disappeared or become town properties.

Second, the land numbering system has changed.  The system used today began in 1886 but a different system was in use before then.  Farm No. 138 (gårdsnummer) was previously Farm No. 199, Parcels (løpenummer) 351 and 352.

Thirdly, it would appear that more than one parcel of Bøn was called Bønsmoen, believe it or not.  I see three other families in the 1865 census living at parcels referred to as Bøhnsmon, each with different løpenummers (e.g., 352c, 352d, 352g).

Lastly, the naming of these parcels is not consistent in all records.  Census and land records do not always agree on the names.  In the 1886 Property Assessment (matrikkel), only two Bøn farm parcels used the word moen in their name, and neither was 352c, d, or g.  So, tracking a particular farm sub-division over time is challenging, especially when the person you are looking for was not a land owner and you can’t track him through land sale records.

Nonetheless, I think I found it.  Seeing the area in person did help.

First of all, we need to understand the Norwegian word moen.  My mother and aunt were told 20 years ago that it means “meadow,” but after consulting a number of Norwegians, I learned it would be more precise to say it means “flat land.”  Altitude is irrelevant.  It’s simply an area that is relatively flatter than the mountainous or hilly terrain more typically found in Norway.  In driving around Bøn, one notices a change in topography between the areas north and south of the Andelva River.  The Bøn village and main Bøn farm (138/1) are north of the river where the terrain is hillier and more rolling.  After you cross the Andelva and head south, and especially southwest, the land flattens out.  This is where we find Bønsmoen.  It makes sense once you tour the area.  In fact, I believe that all of the Bøn Farm parcels that are currently or ever were labelled Bønsmoen are situated in this area.

Secondly, there is a parcel still called Bønsmoen today which is located in this flatter area southwest of the Andelva.   I’ve highlighted it in red on the map.  This is Property 138, Parcel 8 (138/8).  It’s still an active farm.  Here’s a view of the farmhouse, a very pretty property:

You can see in this zoomed-in version of the map where Property 138/8 is clearly labelled Bønsmoen:

There is also Bønsmoen School (skøle) located just south of the farm on the other side of Nyvegen road, and there is a street called Bønsmovegen, which runs NE to SW from the farm down past the school and into the town of Råholt.

Urbanization has dramatically altered this area.  This was all farmland a century ago and much of what constitutes the northern part of Råholt today would have been considered Bønsmoen – or at least, it was part of the Bøn Farm complex, some parcels of which were referred to as Bønsmoen.

In other words, Property 138/8 was almost certainly more extensive 150 years ago, and then shrank as more and more parcels were created.  As discussed in previous posts, Ole Larsen Bohn/Bønsmoen was a cotter (husmann) – he rented a small plot of land in exchange for working on the landlord’s farm.   Originally, Ole could have lived on 138/8 when it was a much larger property, but that doesn’t really tell us where his husmann cottage and small private fields sat.  The landlord probably lived in the same location where the current Bønsmoen farmhouse sits.

Fortunately, we have one land record that is our best clue so far.  On 15 August 1882, Ole Larsen Bønsmoen signed a 6-year rental contract for property no. (løpenummer) 352q.[1]Eidsvoll Municipality, Akershus County, Norway, Panteregister no. III-II, (lpn. 245-416), page 527, “Byksler contract to Ole Larsen Bønsmoen, lpn. 352q,” 15 August 1882; digital image, … Continue reading Industrialists Hartvig and Karl Bache–Wiig were his landlords; they established the Bohnsdalen Paper Mill the same year.  I suspect the Bache-Wiig brothers were new landlords; there are numerous rental contracts signed the same day with other tenants, all within the immediate vicinity of the paper mill on the Andelva.  In an analysis provided to me, genealogist Finn Karlsen noted that property 352q was carved out of 352e in 1882 – and that it later became Property 138, Parcel 19 (138/19) when the new numbering system rolled out in 1886.[2]Finn Karlsen, Trondheim, Norway, to Steven Jonnes, e-mail, 13 December 2018, “Bøen (Bøn) and Bønsmoen,” Personal Correspondence Folders, Bønsmoen Research File, privately held by … Continue reading  Thus, property 138/19 is most likely where the family actually lived.

I’ve highlighted the current boundaries of Property 138/19 in purple on the map.  It is so small that I also circled it.  This is our best assessment of where the Bonn/Bønsmoen family lived circa 1853-1883.  Below are a couple photographs of the location.  There is not much to see.  This is a commercial and residential area on Trondheimsvegen, the main shopping boulevard that passes through Råholt. 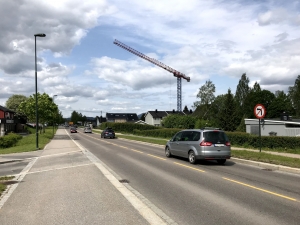 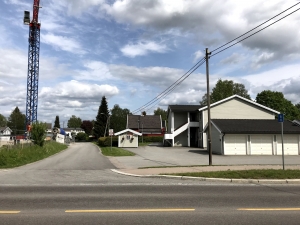 In addition to finding Bønsmoen, I wanted to visit the Dalum, Ålborg, and Mork farms in Eidsvoll Municipality, which all play a part in our ancestry. 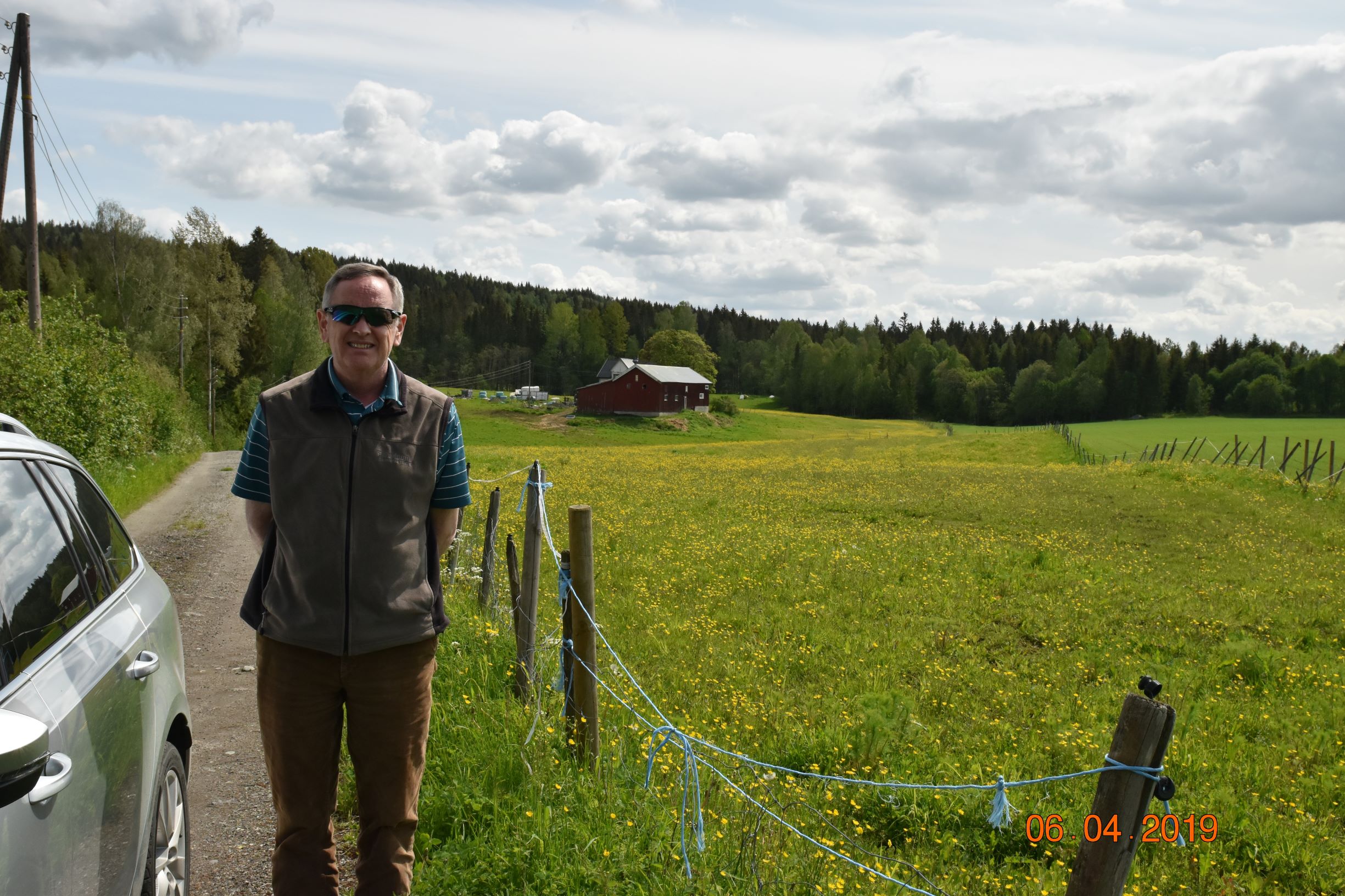 The Ålborg and Mork farms are slightly to the north, just off the map.  Dorthea’s maternal ancestry is associated with the Ålborg Farm complex (gårdsnummer 70), of which Dalum is one parcel.  Ålborg is just north of where the map shows the Grova Farm.  The Mork Farm (gårdsnummer 147) is where Ole Larsen’s mother Marie was from.  It is just north of the Donnum Farm.

Here’s a view of the main Ålborg Farm from a distance.  Although the farm is somewhat hidden by the trees, this is a great image of the Eidsvoll countryside on a gorgeous summer day. 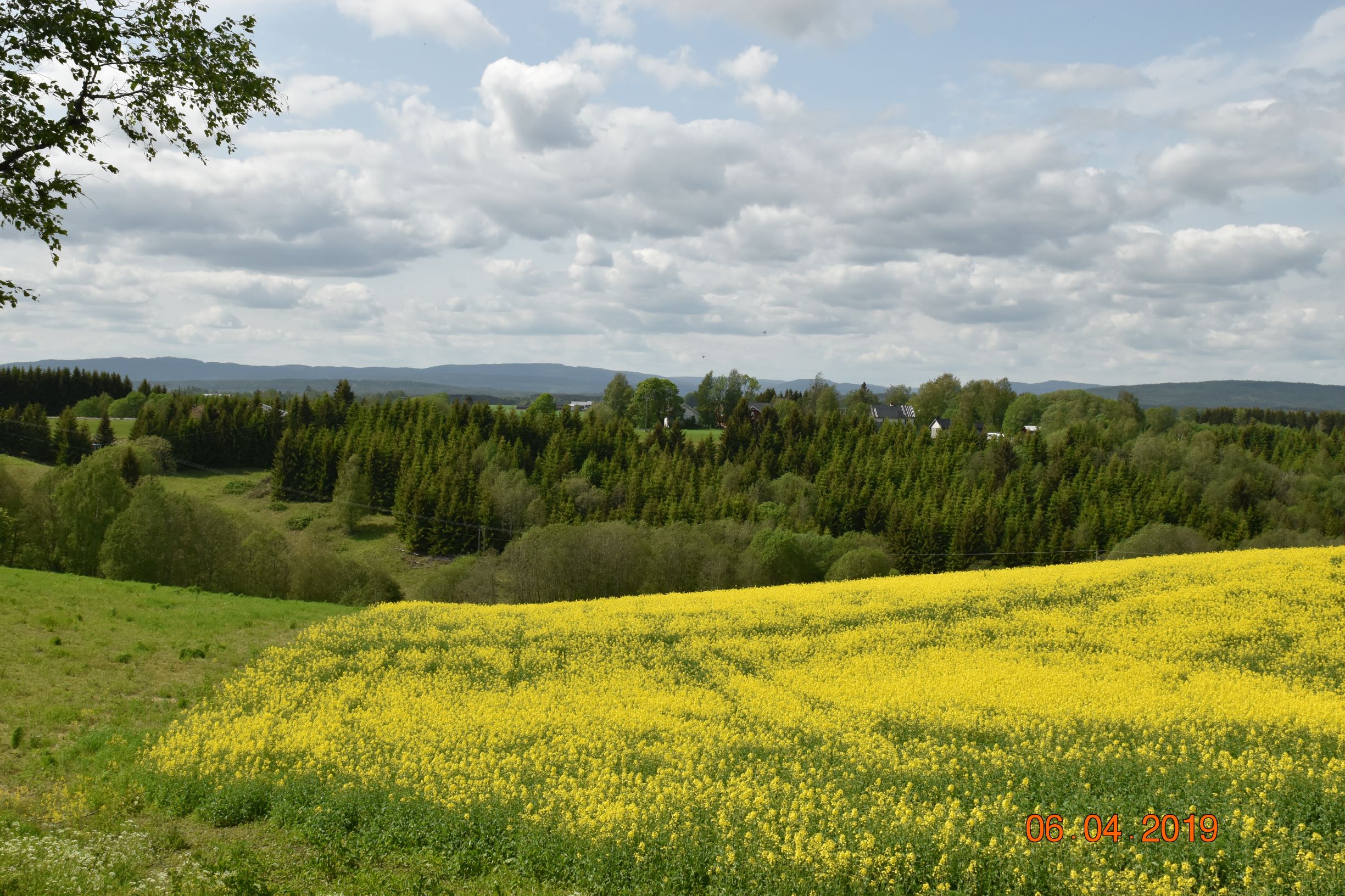 I’ve also circled the Kalsegg Farm (gårdsnummer 139) on the map.  I have a DNA match who owns the farm and we made arrangements to see each other during the trip.  The time spent with them was wonderful and they were kind enough to take us over to see the farm.  The genetic connection is strong and suggests a 2nd-to-4th cousin relationship.  Unfortunately, we have not yet been able to figure out the genealogical relationship despite our mutual efforts.  (This should be a blog post in the future.)  Here’s a photo of their lovely farm: 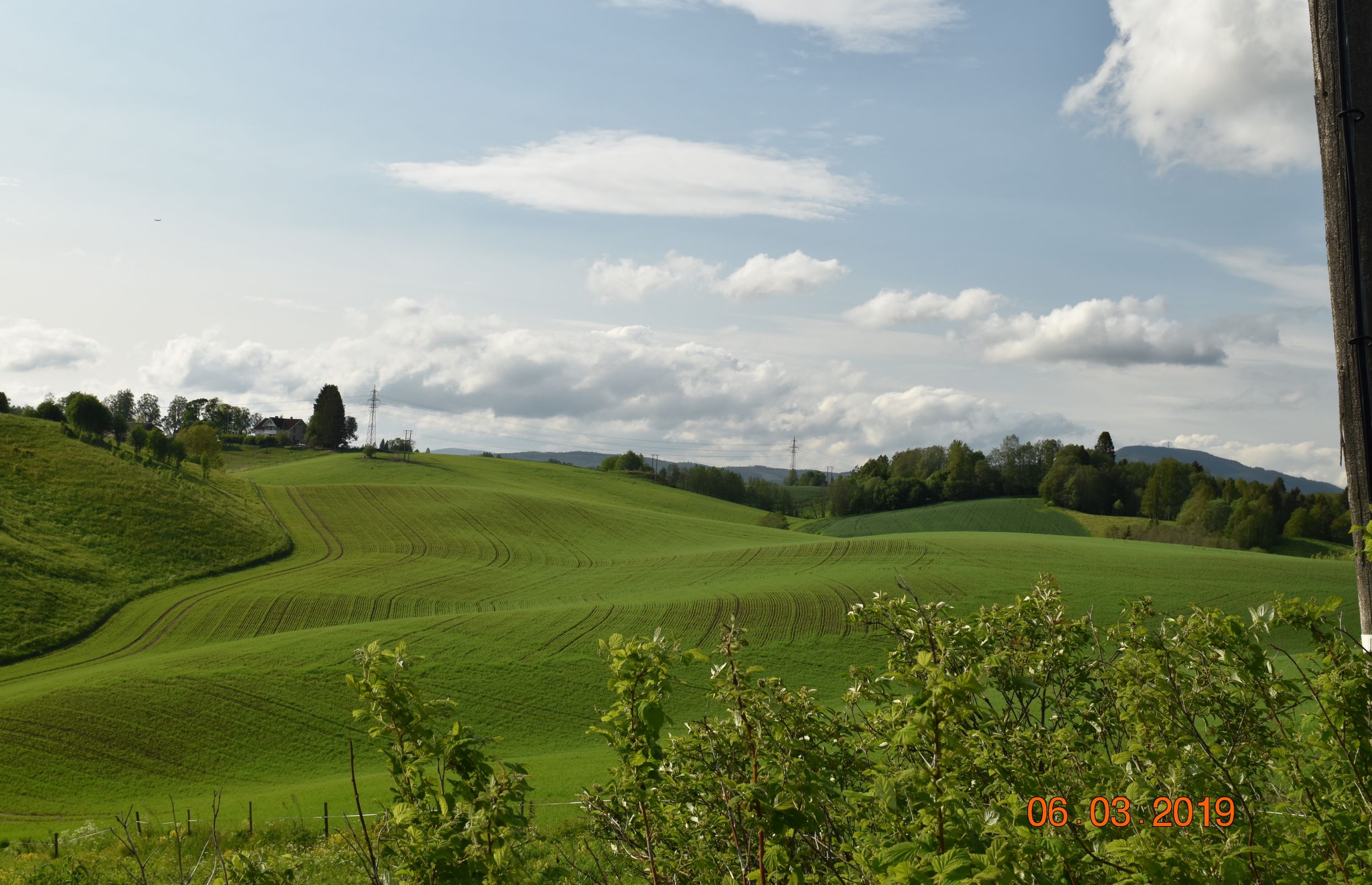 Kalsegg Farm (139/1), view of fields from farmhouse (photo by author)

So that concludes our little tour.  Next Bonn/Bønsmoen research steps: