To me, discovering photos or images of an ancestor is as important as determining their vital statistics.  It puts a face to a name and reveals character and personality.  Even cooler, sometimes you can see a physical resemblance to yourself or someone else in the family.

During our trip to Norway this month, we visited three generations of cousins in Sogndal, Norway: my 2C1R, 3C, and 3C1R, all descended from Petter Pettersen (1835-1909) & Dorthe Eriksdatter Aaberge (1838-1938).  This was a special experience and we are determined to go back again soon.  We must climb Turrli!  (That’s the family’s high pasture on the mountain top.)

What really blew me away though were the photo albums that my mother’s second cousin Odd Dagfinn showed me.  One of the albums was ancient.  Honestly, it looked like it was a 19th century album, or early 20th at the latest.  I’m guessing that Dorthe herself may have started the album.  I forgot to take a photograph of it!  Oops.

Anyway, the album included a formal portrait of Petter and Dorthe, my 2GGs.  What a wonderful surprise!  (The featured image above is them.)  Nobody in the family was sure when the photograph was taken but Odd Dagfinn guessed it may have been their wedding photo.  Since they were married in 1866, that might explain why Petter looks like Abraham Lincoln!

Dorthe Eriksdatter Aaberge is very special in our family tree because she lived longer than any other confirmed ancestor – 100 years and 2 months!  She was born 14 Mar 1838 at the Alme farm in Hafslo parish, right next to the Lad farm.  Later, her father Erik Olsen Venjum moved the family from Hafslo parish to Sogndal and in 1849 purchased one of the Aabyrge farm parcels.  (See my blog post about our Hafslo connection here.)  Dorthe met and married Petter there.  They had six children who lived to adulthood, 5 of whom immigrated to America, including my great grandmother Bertha Pettersdatter Bonn (1865-1936).  Our Norwegian cousins are descended from the only child who remained in Sogndal, Lars Pettersen Aaberge (1879-1964).  Dorthe died on 30 May 1938 at the Aabyrge farm.

Here’s a photograph that shows Dorthe towards the end of her life.  I’m guessing it’s from 1937 when Dorthe was 99 because the grandchildren in this image, Johanna and Olav, were born in 1921 and 1923.  Maybe this photo was even taken on the occasion of her 100th birthday. 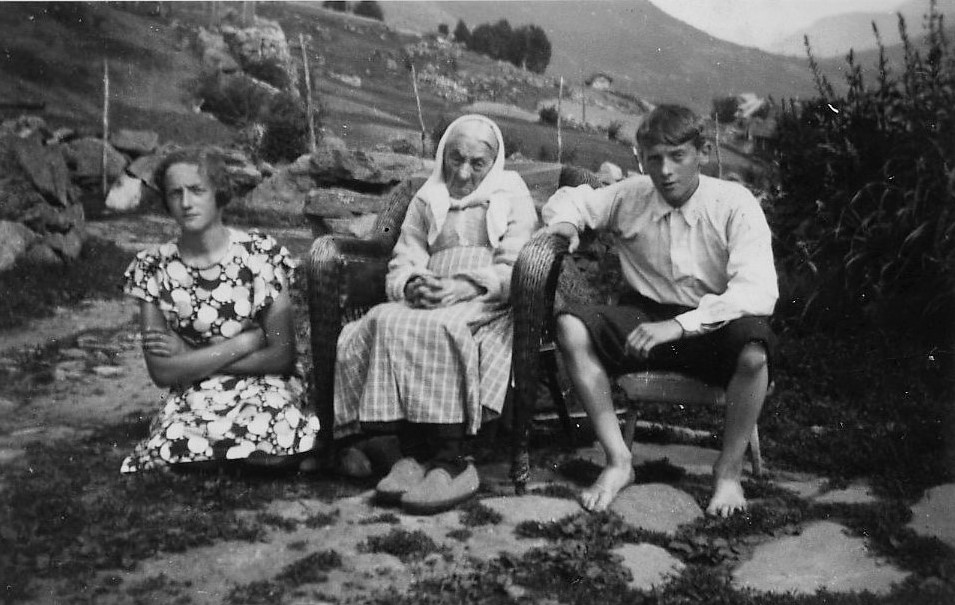 Until the discovery of Petter & Dorthe’s photograph, I had acquired images of 24 of my 30 most recent ancestors (parents, grandparents, great grandparents, and 2GG).  So it is especially gratifying to find two more.  We now have 26 out of 30.  (The four we do not have are Wesley Blalock and wife Harriet Kennelly on my father’s side and Ole Larsen Bohn and Dorthea Olsdatter Dalum on my mother’s side.)