AncestryDNA recently rolled out another ethnicity estimate upgrade.  The 2019 upgrade is based on over 40,000 reference samples, a jump from 16,000 when the last revision occurred in 2018 (and from 3,000 prior to that).  They also fine-tuned the geography and added many new regions.  See the pie chart above for the new results.

My previous estimate from AncestryDNA, generated last year, looked like this: 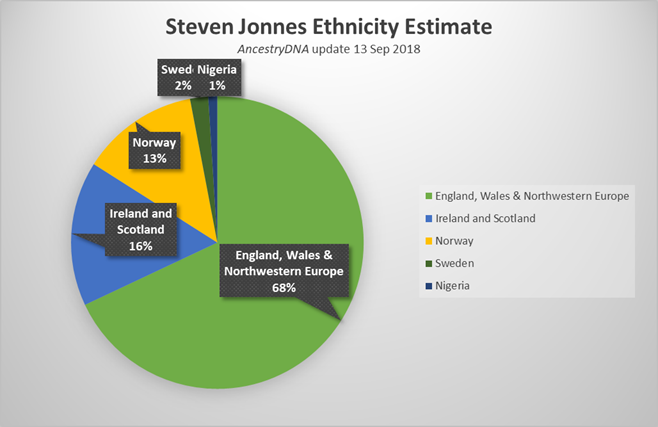 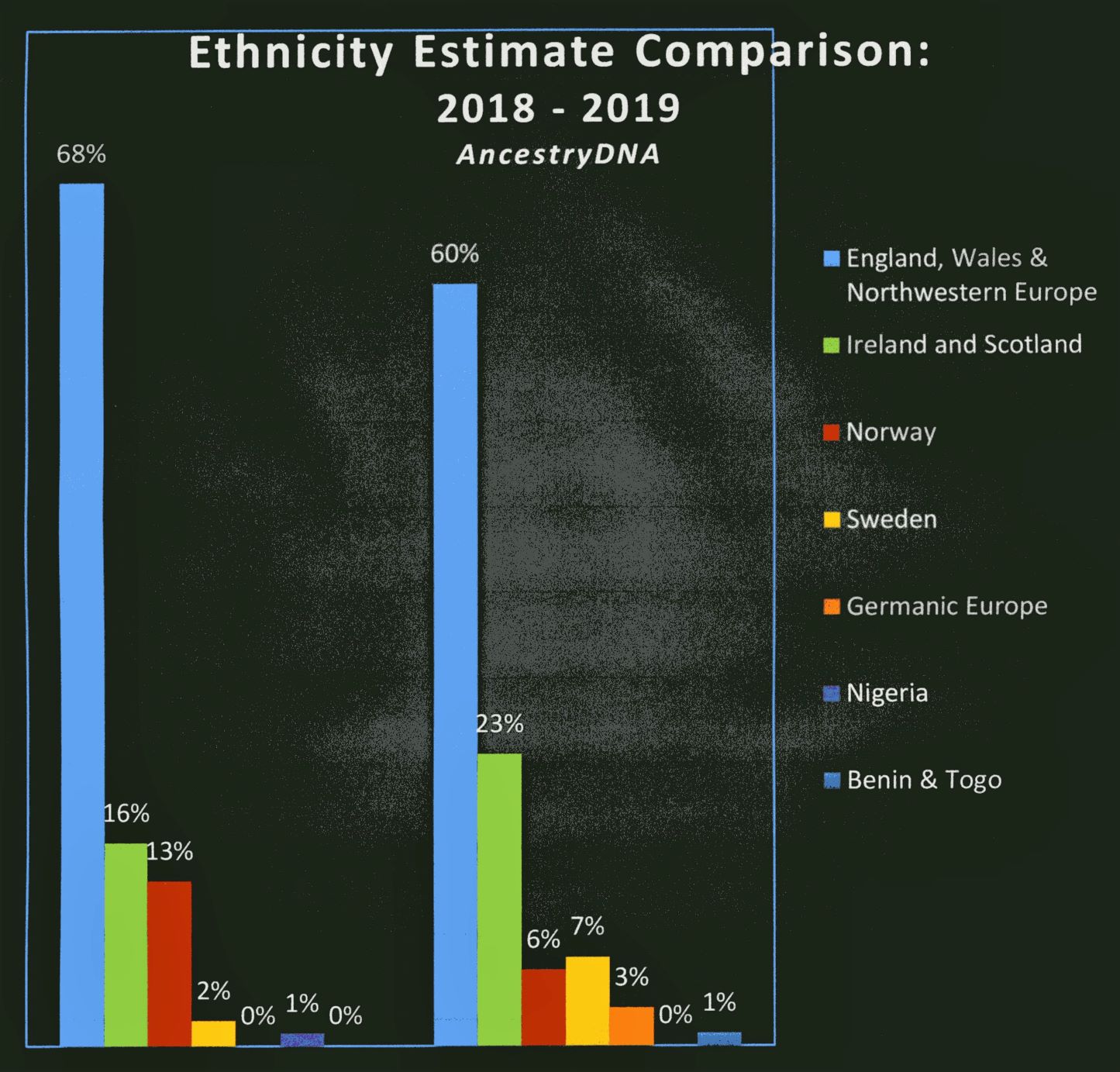 Nonetheless, some changes are worth noting.  One minor adjustment was that England/Wales/NW Europe went down slightly – 8 points – while Ireland & Scotland went up 7 points.

The only big surprise from the new estimate is the Sweden/Norway dynamic.  It’s kind of a shock really.  I was surprised last year to see my estimate show 2% Swedish ancestry, much less 7%!  I hypothesized at the time that it might be due to an old branch in my father’s tree that very likely goes back to New Sweden in the 17th century – the Homan line.   That could still be true, but the fact that it has increased to 7% and is even higher than my Norwegian estimate prompts a whole different line of thinking.

Could it be that the Bonn’s were originally Swedish, or at least partly Swedish?  One of my Norwegian lines, the Bonn family, is relatively close to Sweden.  As documented elsewhere in my blog here and here, they resided in Eidsvoll parish in Akershus County.  That’s only about 60 miles from the border to Sweden in southeastern Norway.

If so, possibly the Bonn ancestors were attracted to the Eidsvoll area by the copper and gold mines operating in Gullverket, about 10 miles east of the Bønsmoen farm (where the family lived between 1853 – 1883).  Mining began in  Gullverket in the mid-18th century and ended in 1902.  Just a thought.

On the other hand, I noticed that modern geographic boundaries don’t necessarily match to ancient ethnic boundaries.  In looking at the ethnicity map for Sweden in AncestryDNA, I see the boundary covers part of eastern Norway and includes the Eidsvoll area, or at least goes right through Eidsvoll.  So instead of migrating from Sweden recently, the Bonn ancestors may have been in the Eidsvoll area for generations but are simply Swedish – or partly Swedish – from very long ago.  A lot depends on the genetic sequences that AncestryDNA uses to tag as Norwegian or Swedish.  They’re already pretty closely related ethnicities, so how the company decides which is which is still a developing science – and is partly why they call these “estimates” in the first place.

The Germanic Europe ancestry was probably teased out of the England/Wales/NW Europe portion from last year’s estimate.  The addition makes eminent sense because I have German ancestry in both my parents lines.  On my father’s side, we believe the Lukemire family was originally German.  The Tabele line is German as well.  On my mother’s side, Charles C. Miller (1822-1885), her 2GG, was a German immigrant.  I also noticed that the ethnicity map for Germanic Europe in AncestryDNA covers most of Alsace-Lorraine.  I have Alsatian heritage in my mother’s tree from Lawrence Whaley (1792-1870) and Rosie Reist (1801-1890).

The Benin & Togo 1% is interesting and probably bolsters the possibility of an ancient African connection.  Last year it was 1% Nigeria, but because of the update they were able to create a new region called Benin & Togo, thereby narrowing the focus.  These two small West African countries are located directly to the west of Nigeria and were among the areas harvested for slaves centuries ago.  On the other hand, the range indicated for Benin & Togo is 0% – 3%, so this could still get washed out in a future upgrade.  Also, my ethnicity estimates at other testing companies continue to differ.  MyHeritageDNA assigns 0% African to its estimate of my ethnicity and FamilyTreeDNA assigns less than 1% from West Africa, which they describe as “trace” amounts that could be due to genetic “background noise.”  So the jury is still out on this one.

The Mystery of an Antique Immigrant Trunk from Nordmøre

John K. Vermilyea was neither Danish nor Lutheran
Scroll to top