I recently helped a high school classmate with her Norwegian ancestry.  We both graduated from Stillwater High School in Minnesota and, although I didn’t know it at the time, she has a Norwegian first name: Maret.  I always liked the name, partly for the sound and partly because it was so unique.  I’m pretty sure I never met anyone else with that name in my life.  I knew her as Maret Glampe, she’s Maret Bylander now.

Well, I found out Maret was named for her great-grandmother, Marit Tredahl, who was born in Sundahlen, Norway on 28 April 1864 and immigrated to North Dakota.  Her family still has the old Norwegian trunk that her great-grandmother used to cross the ocean.  The trunk features Marit’s birthdate, place of origin, and destination.

Antique Norwegian immigrant trunks like this are wonderful examples of folk art and are popular collectibles, especially when decorated with colorful rosemaling designs.  You can always find some on eBay or Craigslist.  They often started out as wedding hope chests that a bride would use to carry her possessions to her new home and were then re-purposed for an immigration voyage.  Maret’s family restored hers in the 1960s because it was in bad shape.  Unfortunately, the original faded artwork on the outside was lost during the restoration.  It remains a wonderful family treasure, nonetheless.

Beyond the information on the trunk, Maret did not know anything about her great-grandmother’s origins.  She wondered where Sundahlen was and who Marit’s parents were.  Fortunately, I was able to provide some answers pretty quickly using Norway Digital Archives and Norgeskart, a property mapping tool.

The location riddle was tackled first.  Marit’s trunk gives her last name as Tredahl.  That suggests a farm name.  So I started searching for farms with that name and came across several candidates in various locations in Norway.  But there was only one – spelled Tredal today – that was situated in a municipality called Sunndal, quite close to the Sundahlen spelling on the trunk.  (Even more compelling, the spelling of Sunndal in the 19th century was Sundalen, based on the name of the main valley in the municipality.)  So that became the likeliest candidate.

The map below zeroes in on Møre og Romsdal and shows its towns, municipalities, and parishes.  Sunndal Municipality is divided by the Hof and Romfo parishes.  (We visited Molde, the county seat, on our cruise earlier this year.) 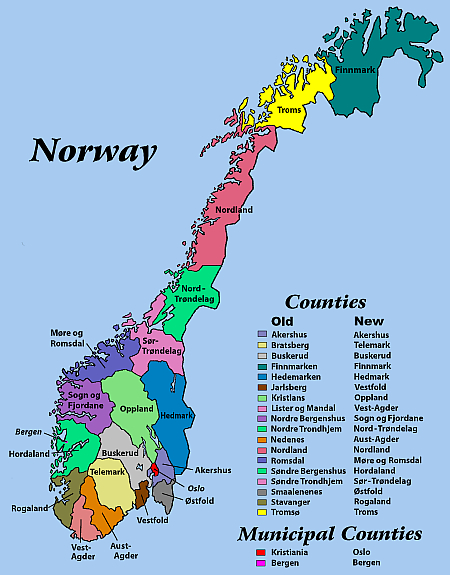 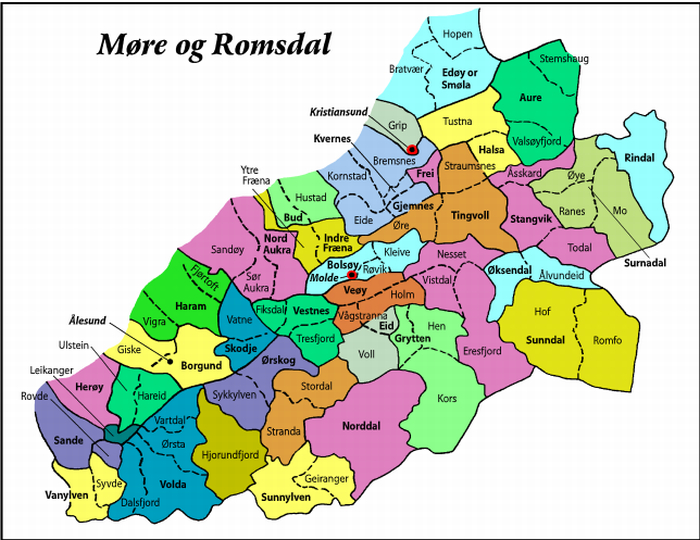 So I began searching for records related to Marit Tredahl in Sunndal Municipality in the late 19th century.  Nine Norwegian-language records in the Digital Archives were found, plus a U.S. passenger record.  The Lutheran Church records for Hof Parish in Sunndal were particularly helpful. 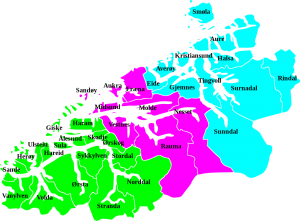 The records confirm that this is indeed the Marit Tredahl who is my classmate’s great-grandmother.   Her parents were Anders Johnsen Tredahl (1817-1883), a tenant farmer, and Sigrid Johannesdatter Vollen.(1822-1885).1)The death dates are not confirmed and are based solely on a couple public family trees. 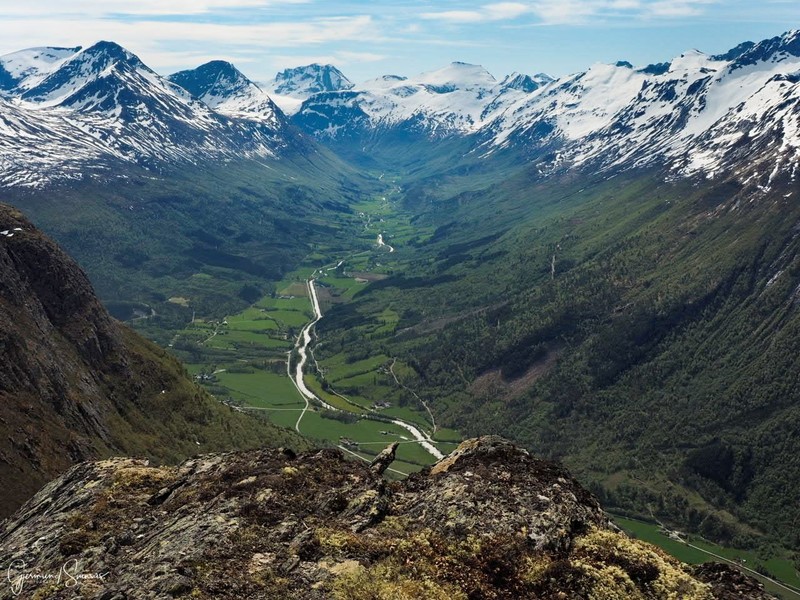 Sunndalen Valley as it follows the river Driva (Source: borgund.vgs.no)

The pertinent records in chronological order:

1883 Passenger List:  Marit Dahl, age 20, arrived in NYC on the ship Heimdal on 29 June 1883.  The ship left Kristiansund, a small port city in Møre og Romsdal, and also berthed in Copenhagen, Denmark before proceeding to America.  Marit was processed through Castle Garden Immigration Station; Ellis Island did not open up until 1892.

What these records tell us is that Marit Tredahl was born into a cotter (husmann) family living on a farm called Skrøen.  A cotter is a tenant who occupies a cottage on someone else’s land in exchange for labor, similar to an indentured servant.  Husmann can also be translated “tenant farmer.”  Her father, Anders Johnsen, was a specific kind of cotter called a husmann med jord, meaning he was allowed to grow some crops of his own in addition to working on the landlord’s farm.  Norway’s population doubled from 1800 to 1870 and there was an explosion of tenant farmers.  They constituted the bulk of the immigrants to America because of their lack of economic opportunity.  (See a blog post here about my own Norwegian cotter ancestor.)

The map above shows the area around Tredal – or Tredalen as it’s spelled here.  Tredal is right next to the county seat, Sunndalsøra, a town of about 4,000.  Sunndalsøra sits at the terminus of the Sunndals Fjord and is known today for its aluminum plant, the primary employer.  Sunndalen Valley follows the river Driva southeast from the town.  The neighboring Innerdalen Valley is well-known for its scenic beauty and attracts tourists and hikers.  The Tredal Farm is actually in the Litledalen Valley close to where it joins the Sunndalen Valley.  The original Tredal farm probably has been affected by a certain degree of urbanization because of its proximity to Sunndalsøra.  On Google map, you can see a Tredal School and Trædal Hotel nearby.

You’ll notice from the records that Marit’s family is recorded sometimes at the Skrøen farm, sometimes at Tradal, and twice at Skrøen under Tradal.   The reference to Skrøen under Tradal is very helpful.  This indicates that the main farm they lived on was Tredal, but that the parcel they inhabited specifically was a sub-farm called Skrøen.  Their landlord would have lived on the main Tredal farm while they lived on a small husmann parcel called Skrøen.   The Tredal Farm today is registered as Property no. 53 in Sunndal Municipality and includes dozens of parcels (Property 53, Parcel 1, Parcel 2, etc.).  I don’t see a Skrøen parcel listed in current maps, but maybe I’m not looking closely enough.

So let’s summarize the family: 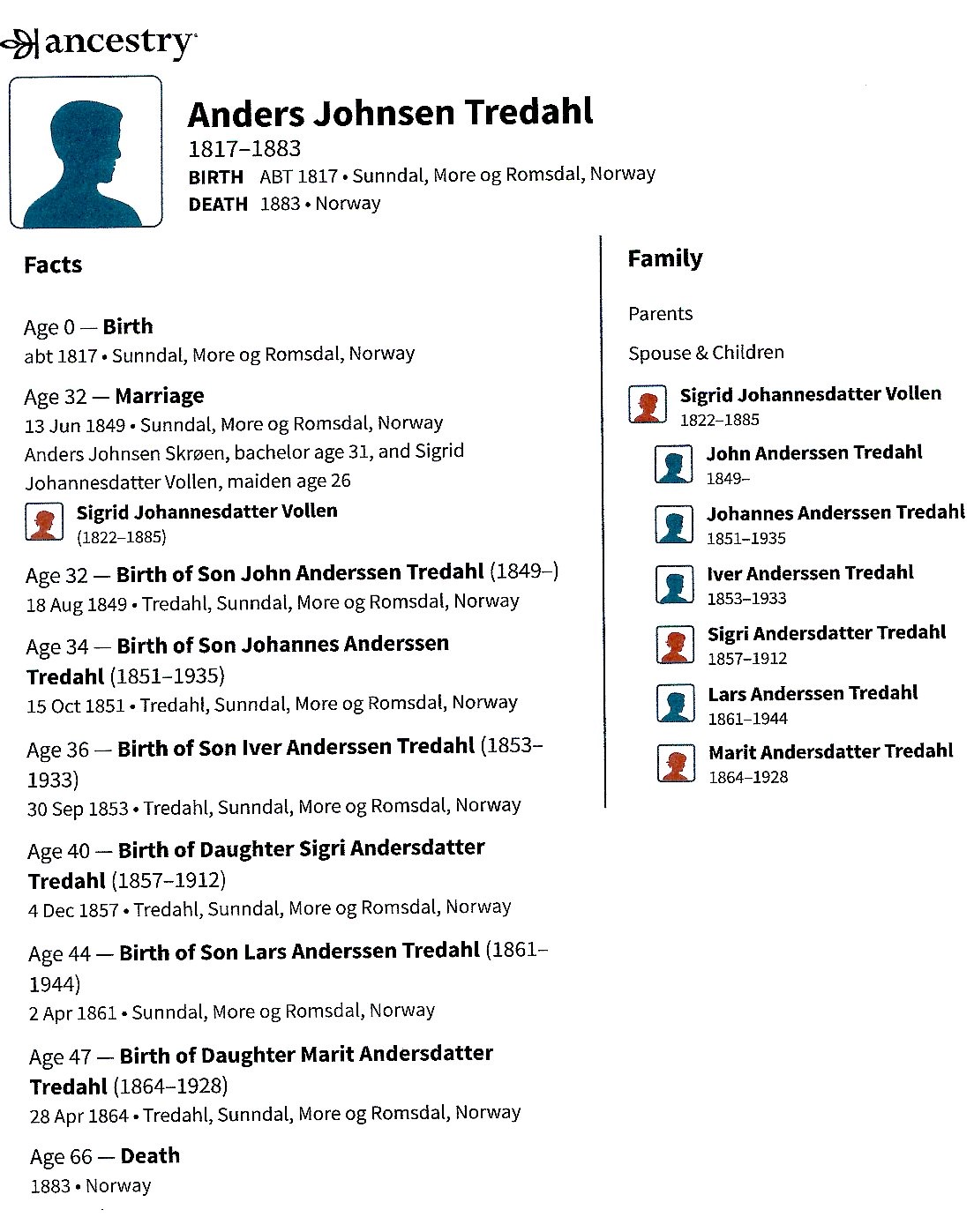 I’ve assigned the farm name Vollen to Marit’s mother Sigrid Johannesdatter because it’s on her marriage record.  There is a Vollan Farm located over 20 miles from Tredal at the other end of the Sunndalen Valley, so I assume that’s where she was from.

Unless there were other children which I have not found, Marit was the baby of the family.  She had five older siblings.  John, the oldest, may have died young.  He does not appear in the 1865 census nor can I find a Lutheran confirmation record.  That leaves five adult children: Johannes, Iver, Sigrid, Lars, and Marit.  Of these 5, four for sure immigrated to America.  The only child to remain in Norway, presumably, was Iver Anderssen Tredal (1853-1933).  A couple family trees show him dying in Norway in 1933, but I have not confirmed that.

The first to emigrate was Johannes.  He arrived in NYC in July 1876 as Johannes Tredal, age 25.  Marit was the second; she arrived 1883.  Then, in 1886, Lars and Sigrid immigrated together.  All settled in Cavalier County, North Dakota, although Sigrid and her husband Peter Flo later moved to Montana.

The siblings adopted the surname Dahl upon immigration.  Johannes was the first to do so.  Marit followed suit, which explains why her passenger record lists her as Marit Dahl.  She later became Marit Berger after marriage.  Keep in mind there were no surnames at this time in Norway.  Norwegians did not adopt surnames until the late 19th century and were not mandated to do so until 1923.  So when they came to America they had to create one.

Digging into Marit Tredahl’s life was fascinating.  I love learning about Norway in general and researching this project served as an introduction to Møre og Romsdal County.  It was a major Viking area 1,000 years ago.  I found the three historic districts – Sunnmøre, Romsdal, and Nordmøre – particularly interesting.  From what I was reading, each still maintains to some extent their own culture, cuisine, and dialect.

I also learned about the female name Marit.  All the Norway research I previously performed was in areas south of Møre og Romsdal, and the name was new to me, so I assumed it was rare nationally.  Not so.  It was actually quite common in northern Norway in the 19th century.  In the 1865 census, there were 15,187 females named Marit in the country, including those named Maret and Marith.  Of those, 91% (13,751) were in the north (Oppland, Møre og Romsdal, Sør-Trøndelag, Nord-Trøndelag, Nordland, Troms, and Finnmark).  Only 17 were counted in Akershus County in southeastern Norway, where I’ve done so much research.  The name did grow in popularity nationally in the 20th century and peaked around 1950 when it was a top-five name.  It has cratered in popularity since then, however, and is rare today.  At least it’s being used (in part) by Crown Princess Mette-Marit!  So maybe it will make a comeback.

Another Ethnicity Update from AncestryDNA
Scroll to top