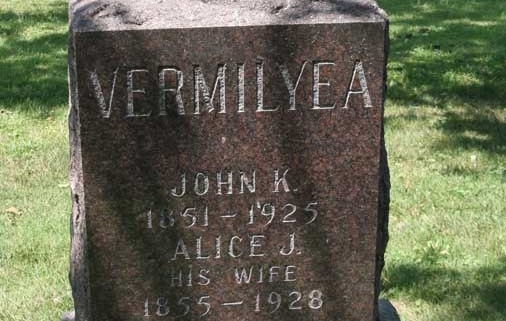 I’ve always been saddened by the way John Knickerbocker Vermilyea (1851-1925) died.  He is a 2nd great-grandfather (2GG) and one of very few direct ancestors who died in an accident.

I happened to be looking at him again recently and was confused by an online memorial at Findagrave.com.  It claimed that John K. Vermilyea was buried at the Danish Lutheran Church Cemetery in Elmdale, Morrison, Minnesota.1)Findagrave.com, Find A Grave, database (https://www.findagrave.com : 1 November 2019), memorial ID 23545516 for John K Vermilyea 1851-1925, Danish Lutheran Church Cemetery, Elmdale, Morrison, Minnesota [removed 6 November 2019].  That seemed very odd.  John was neither Danish nor Lutheran and, as far as I know, no one in the family ever lived in Elmdale, Minnesota.

Another Find A Grave memorial claims that John was buried at the Elmdale Cemetery in Osawatomie, Kansas.2)Findagrave.com, Find A Grave, database (https://www.findagrave.com : 1 November 2019), memorial ID 20882174 for John K Vermilyea 1851-1925, Elmdale Cemetery, Osawatomie, Miami, Kansas.  The tombstone images attached to the two memorials are identical, so one of the memorials has to be incorrect.  The tombstone reads: John K Vermilyea 1851-1925 Alice J. his wife 1855–1928.

Some background: John married Alice Jane Whitney (1855-1928) on 8 March 1876 in Dover, Olmsted, Minnesota.3)“Minnesota, County Marriages, 1860-1949,” database with images, FamilySearch (https://familysearch.org : 3 November 2019), entry for John R or John K Vermilya and Allie J Whitney, 8 March 1876, Dover, Olmsted, Minnesota; citing p. 176, image no. 409.  He and Alice subsequently bore three sons and two daughters, including my great-grandfather David Mead Vermilyea (1882-1950).  Here’s the family around 1896 with John & Alice sitting in the middle surrounded by their five children: Margaret, David, Emma, Avery, and Earl.4)I’m guessing at the year based on the known ages of the children. 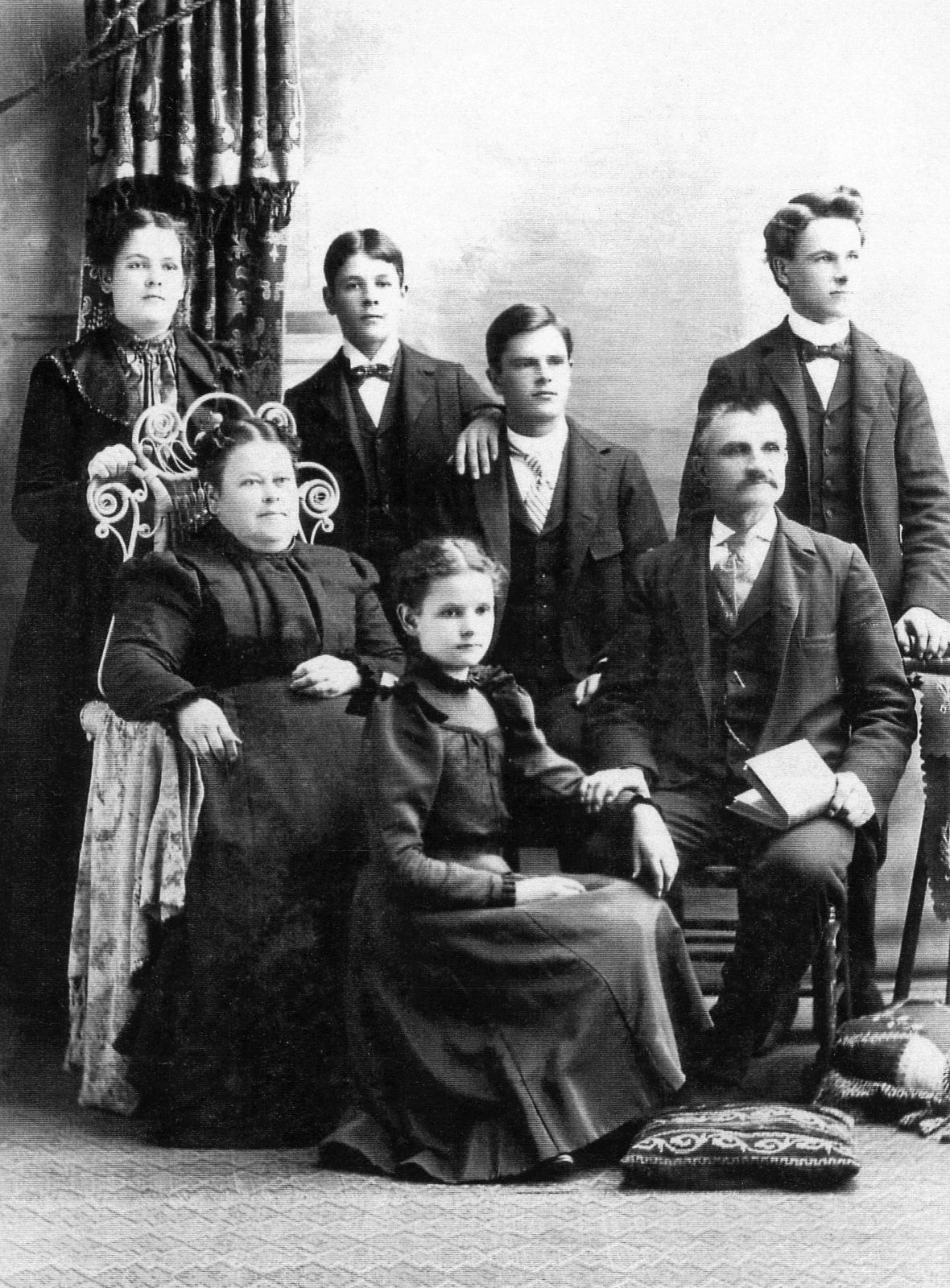 So, I suspected the Osawatomie cemetery location was the right one, but needed to find other sources to be sure.  First I checked to see if the two cemeteries maintained their own websites.  They do not.  The Danish Lutheran Church Cemetery in Elmdale, Minnesota is in fact abandoned although still standing.6)“Danish Lutheran Church Cemetery – Elmdale, MN,” Waymarking.com (https://www.waymarking.com : accessed 6 November 2019), Waymark Code WM93RV, posted 24 June 2010.

An obituary in the Rochester Post–Bulletin tells the full story.  John was on a road trip with his brother James I. Vermilya of Olmsted County, a former Minnesota state senator, to visit two other brothers in Wadena, Minnesota and North Dakota.  They had driven all day and were attempting to get back to James’ place in Quincy Township, east of Rochester.  The climb up Moriarty Hill caused the automobile to stall.  Here are the grim details:

When nearly half way up the steep incline, the machine came to a halt and the driver attempted to bring it to a stop by throwing in the low clutch.  His brother, after advising as to the best means of stopping the car, stepped out on the ground.  A moment afterward, after the machine had been halted in its backward roll, John Vermilya was noticed lying on the road.  When picked up by his brother, he was groaning and bleeding at the mouth.  He was rushed to the hospital at once, where he died this morning.9)“Obituary from Post-Bulletin, Rochester Minnesota,” transcript by rmhikers, shared 14 May 2008, linked to “Jonnes Family Tree” (public) on Ancestry (https://www.ancestry.com/mediaui-viewer/collection/1030/tree/86731620/person/30542993705/media/231a08bd-e64f-4ebe-966d-c08124f03b75?_phsrc=GaG10112&usePUBJs=true : accessed 4 November 2019); citing original publication in Rochester Post-Bulletin, 22 September 1925.

The accident occurred after the sun went down because the obituary explains that they reached Owatonna at dusk and decided to push on.  James must have felt guilty afterward because he told the newspaper he assured his brother he “was able to make the run.”10)“Obituary from Post-Bulletin,” in Jonnes Family Tree, Ancestry.  I think they were only 10 miles or so from home.

At the end of the obituary, we find the statement, “It is expected that the body will be shipped to Osawatomie, Kansas for burial.”11)Ibid. 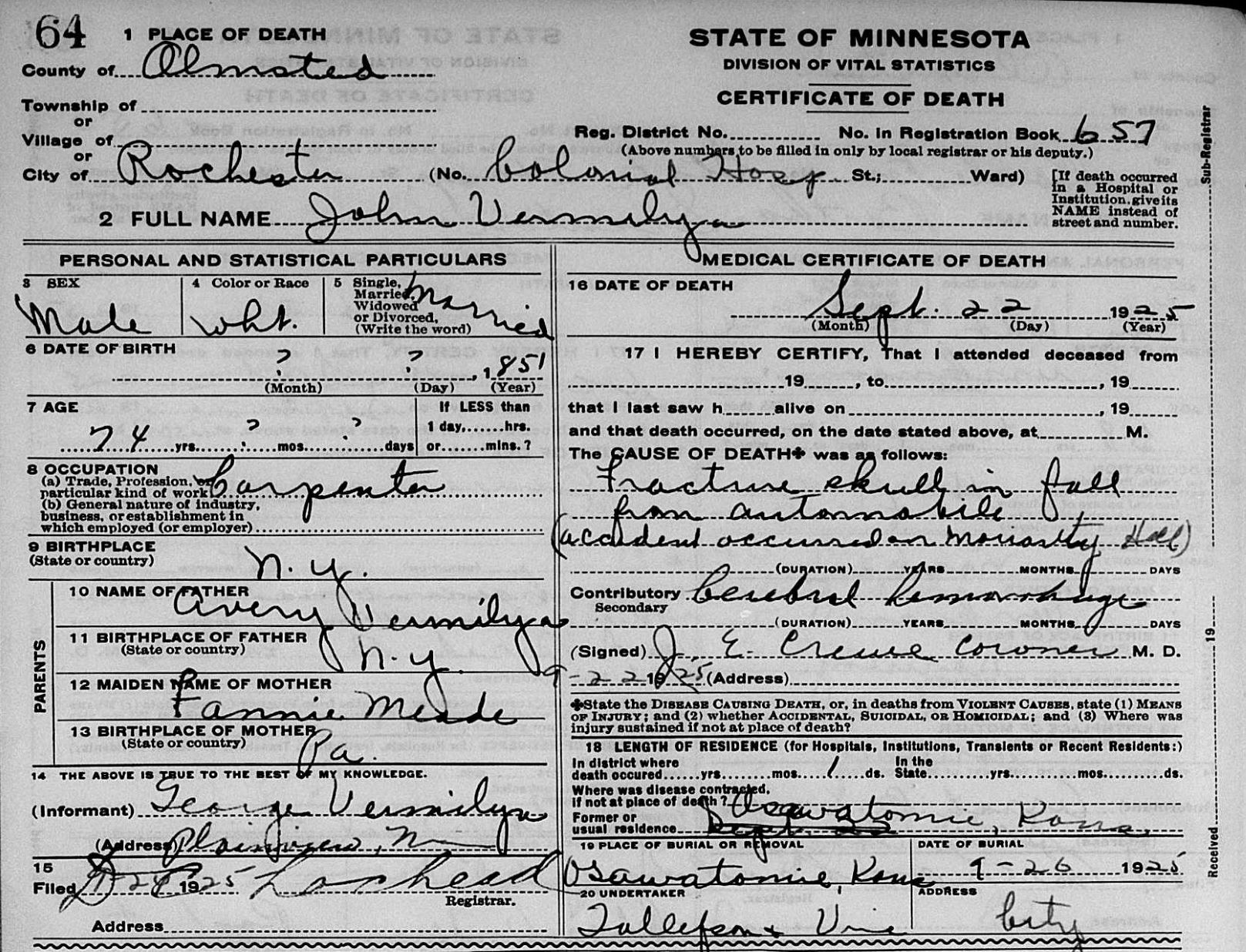 So, my suspicion was correct.  John K. Vermilyea died in Rochester, Minnesota but was buried in Osawatomie, Kansas where he resided.  Find A Grave memorial no. 23545516, which cites the Danish Lutheran Church Cemetery in Elmdale, Morrison, Minnesota as John’s burial location is incorrect.   Someone posting the memorial must have confused the town of Elmdale with the cemetery in Osawatomie, Kansas; probably his death in Minnesota contributed to the confusion.

This is an excellent lesson in understanding the limitations of Find A Grave memorials.  The data and information on Find A Grave is submitted by volunteers and mistakes can occur.  Fortunately, there is a procedure for remedying errors.   Anyone can submit corrections to the Find A Grave website as long as you register an account.  It is free to register.  To submit a correction, you go first to the memorial in question, then click the Suggest Edits button.

I decided to do so.  I navigated to John’s Find A Grave memorial no. 23545516 (Elmdale, Minnesota).  After clicking on the Suggest Edits button, I found I had a choice of editing the memorial or merging duplicate memorials.  I opted to merge the memorials and explained that memorial no. 20882174 (Osawatomie, Kansas) was the correct one.  I cited John’s death certificate.  The incorrect memorial was removed within a day.

Another Ethnicity Update from AncestryDNA