Genetic genealogy is booming!  DNA testing companies like Family Tree DNA (FTDNA), AncestryDNA, MyHeritage DNA, and 23andMe, among others, are growing rapidly as more and more people are spitting into test tubes and getting their DNA examined and analyzed.  The number of people tested world-wide doubled in 2017 to more than 12 million!

I originally tested with AncestryDNA years ago, but switched in 2016 to FTDNA because it offered more in-depth analytical tools and provided full Y-DNA and mtDNA testing with cousin matching.  Actually, I should say I added FTDNA, not switched, because I still maintain my DNA profile on AncestryDNA.  I just use FTDNA more and even administer a family project there.  I also use GEDMatch.com.

I will be using this blog to report on my efforts to understand this deeply complex subject.  Comments or corrections are welcome from readers as I navigate my way.  Here first is a primer on DNA testing in my own words. 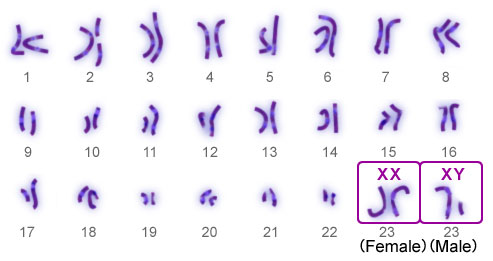 There are 4 kinds of DNA test for ancestry purposes:

Autosomal DNA is based on the 22 pairs of autosomes – that is, Chromosomes 1 through 22.  It is the most all-encompassing of the DNA tests on the market.  Virtually all the testing companies offer it, and in many cases, it’s the only test offered.  The largest testing company, for example, is AncestryDNA and it only offers autosomal testing.  (The autosomal test offered by FTDNA is called Family Finder.)

It is important to understand that the autosomes “recombine” during conception, meaning they mix up or jumble the bits of DNA code that are passed on to the child.  Each of us receives 50% of our Autosomal DNA from our father and 50% from our mother.  But the 50% we get is unique and is not the same 50% our brothers and sisters receive, even though they have the same parents.  Furthermore, the 50% we receive from each parent means that 50% of his or her DNA is not inherited by us.  With each succeeding generation, we lose more and more DNA from particular ancestors: We get 50% from parents, 25% from grandparents, 12.5% from great grandparents, etc.  Eventually, as several generations go by, you lose any genetic inheritance from some of your ancestors.

Autosomal testing is the best test for genealogical research because of it’s ability to match test-takers with genetic cousins.  Once you identify a cousin, you can compare his family tree with yours and potentially discover new ancestors.  You can also use autosomal testing to compare and contrast the DNA of close family members and see how much they each inherited from different ancestors.  A third use for autosomal testing is to learn about your ethnic heritage.  Although Autosomal DNA is not generally helpful in understanding your deep genetic roots, it can provide rough estimates of your ethnicity (e.g., 50% Scandinavian, 35% German, 15% Eastern Europe).  These ethnicity estimates are very popular and one of the main reasons for the growth in the DNA testing business.  They are fun but it’s important to caution that they are only estimates, and each company uses different reference populations to define ethnic groups, so the results for one person can vary from company to company.  In my case, for instance, AncestryDNA says I am 7% Iberian while FTDNA says I am 0% Iberian.

Y-DNA testing is based solely on the Y chromosome, which is passed down from father to son to son, ad infinitum.  Women don’t test for Y-DNA because they don’t have a Y chromosome.  Unlike the autosomes, the Y chromosome does not recombine during conception.  This is critical to understanding Y genetics.  The Y chromosome is passed on intact without alteration, except for rare “mutations,” or variations, that occur every few generations.  In other words, my Y Chromosome is exactly the same as the one my patrilineal ancestor from 10,000 years ago had, except for a very small number of variations in the coding.  Y-DNA tests are primarily useful for deep genetic root analysis by identifying the ancient haplogroup to which you belong, but can also be used to build your more recent patrilineal ancestry through cousin matching.

X-DNA testing is based solely on the X chromosome, of which boys have one and girls two.  Interestingly, X chromosomes may or may not recombine.  Many times, a father may pass on his X chromosome to a daughter completely unchanged; likewise, a mother may pass on her X chromosomes to her sons or daughters completely unchanged.  X-DNA tests are actually not stand-alone tests, so you can’t go order one from a testing company – at least not yet.  Instead, X-DNA is tested in conjunction with autosomal tests.  However, X-DNA results can be reported separately from Autosomal DNA and each testing company treats X-DNA differently.  FTDNA has a chromosome browser for analyzing X-DNA results.  Because the inheritance pattern of X-DNA differs between men and women, X-DNA results really help narrow down which side of the family tree a match is located.

MtDNA testing is not based on the 23 chromosomes in the cell nuclei.  Rather, mtDNA testing is based on circular bits of DNA that reside in the mitochondria (so-called “energy factories”) outside the nuclei.  Because mtDNA is passed down from mothers and not fathers, it has become a way to trace one’s purely maternal ancestry, handed down from mother to daughter to daughter, ad infinitum.  However, both men and women can test for mtDNA because men do receive their mother’s mtDNA inheritance – they just don’t pass it on themselves.  MtDNA tests are the least useful for cousin matching, and therefore, the least useful for tracing your ancestry.  They are primarily used to identify your maternal haplogroup and thereby better understand your deep matrilineal roots.

For those interested in following this field more closely, I recommend a Facebook group: Genetic Genealogy Tips & Techniques hosted by Blaine Bettinger.  It’s a closed group so you have to request to join.

Are Humans Responsible for Megafauna Extinctions?