There are many reasons why I like genealogy.  I should do a blog post on the subject someday.

In that learning process, you sometimes get lucky and even find a clue to their thoughts and ideas.  I love when I discover something written by an ancestor.  Hearing their voice, even if only on paper, always makes you feel closer.  The farther one goes back in time, of course, it becomes rarer and rarer to find such gems.  Unless they’re famous for some reason, it’s unusual to find anything written by an ancestor earlier than 1900. 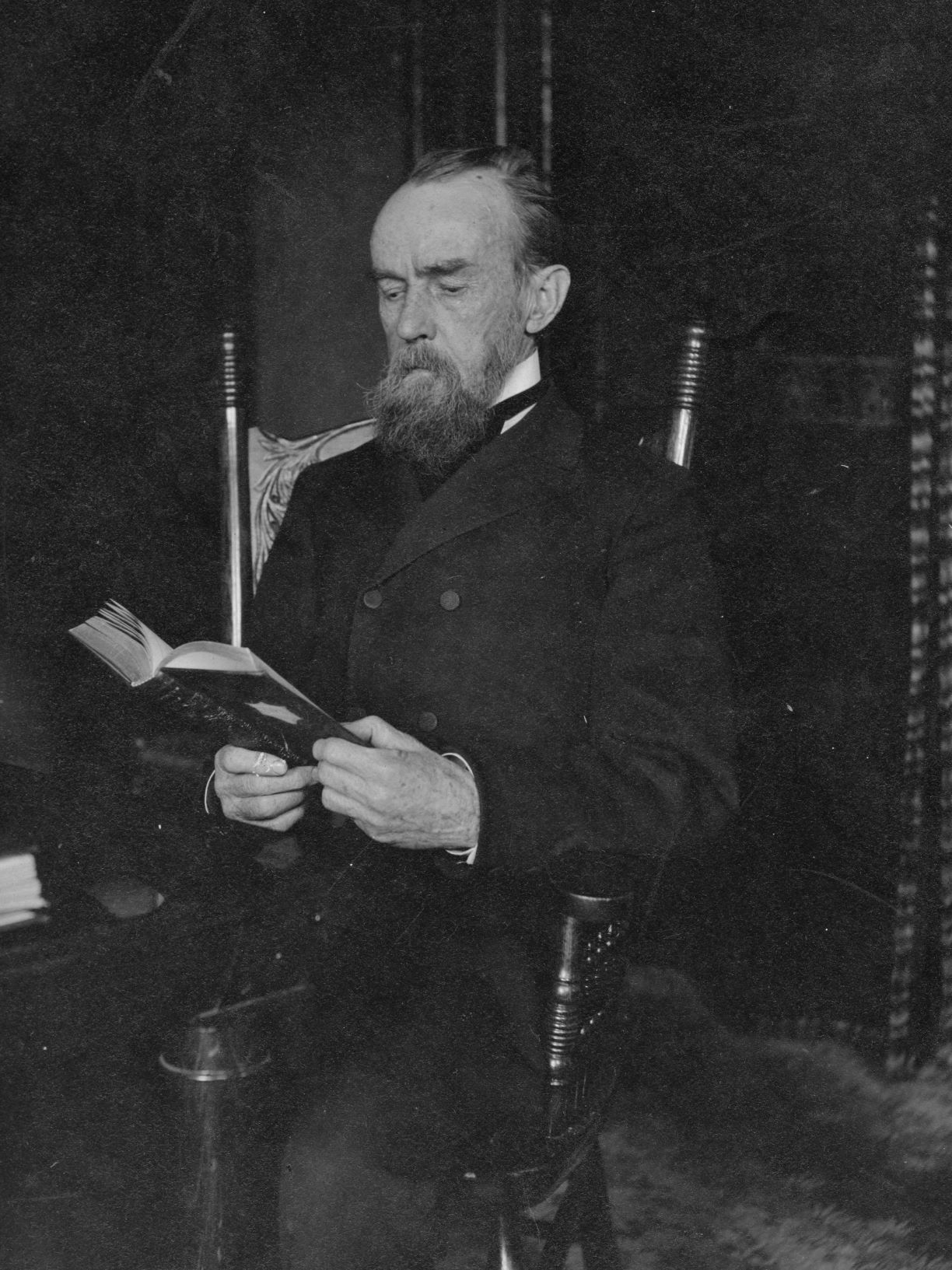 I have one such gem written by my second great-grandfather, Nelson E. Jones (1821-1901).  In 1892, he hand-drafted a 19-page report entitled True Stories by Grand Pa, in which he told his three grandsons (Hildeburn, Nelson, Lloyd) some stories about his life.  It’s chock full of genealogical information, but what really struck me was the final paragraph.  It’s an observation about man and nature.  I often think back on it.

It may be foolish to tell it.  It may be unwise to say to a little boy like a grandchild.  That if Grand-pa had his choice of all lands, Kingdoms, and countries, and could take possession in fee simple, as lawyers say, forever – never get old nor die nor change his abode; he would take a land and country on which no human foot ever made imprint.  A country full of beasts and birds covered with deep dense forests and open glades and running brooks and rivers.  A country where no mortal ever was, nor ever would intrude.  The Indians paradise is natures Elysium.  Nothing has the fascinating attractions of an endless unbroken forest.  Cities with golden streets and crystal fountains fade to visions of the night and the sameness tire, while the ever varying beauty, variety,  sweetness of an eternal never ending forest, the homes for beasts and birds is the place the red man might well desire, as he pictures it, and everlasting abode, and his hopeful paradise, if there is such a place, even though designed for more than one being to enjoy.  If there is in the great hereafter such a place where the children of nature go, Grandpa hopes to be there also.  But suppose everybody in this world is obliged to fill the place marked out for them in the great unfinished problem, and when we cannot get what we want, we must accept what we can get.  A coon loves forests and trees and climbs the greatest, & lives in the hollow branches.  But when timber becomes scarce he makes his home in holes in the ground and in little caves among rocks.  So all things in nature adapt themselves to surrounding circumstances.

Nothing has the fascinating attractions of an endless unbroken forest.  We forget in the 21st century what it must have been like to arrive in the New World when the land was pristine and untamed, and when the entire eastern half of America was unspoiled virgin forest.  Despite its dangers, we have an atavistic attraction to wild nature.  Most modern-day Americans, especially urbanites, have little feel for this. 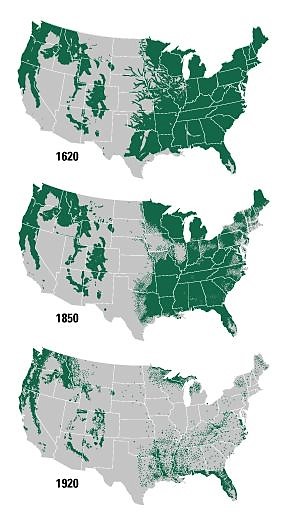 One Hollywood movie captures this sentiment to a certain extent.  The Last of the Mohicans (1992) has a scene where the Madeleine Stowe character Cora Munro, fresh off the boat from London, is crouching at night in the deep forest with Hawkeye, played by Daniel Day-Lewis.  They are holding firearms and guarding their camp against Ottawa warriors.  The conversation that ensues is the crux of the movie, in my opinion.  In describing her reaction to America, Cora says:

It is more deeply stirring to my blood … than any imagining could possibly have been.

In contrast to her sister who is scared to death and can barely function, Cora is thrilled to the depths of her soul.  That’s the moment Hawkeye falls in love.

Burial ground scene from Last of the Mohicans, 1992 (Source: Pinterest)

The comparison only goes so far, of course.  Dr. Jones was speaking of the wilderness absent people, while Cora’s fascination was with both the wild land and the people in it – the frontier settlers and the Indian tribesmen.  Nonetheless, I feel Dr. Jones would have related to her reaction.

Even though Nelson grew up in the 1820s and 1830s in central Ohio, more than 25 years after the Treaty of Greenville and the beginning of the settlement of Ohio, good-sized patches of virgin forest still existed.  Like all men in that day, he was an avid hunter.  In the one book he published, The Squirrel Hunters of Ohio, Dr. Jones spent considerable space describing hunting rituals and the popularity of dogs.  All the men within a certain radius knew each other’s dogs, every dog had a name, and some dogs became famous for their tracking ability or their distinctive howls.[1]N.E. Jones, M.D., The Squirrel Hunters of Ohio, or Glimpses of Pioneer Life (Cincinnati: The Robert Clarke Co., 1898).  Dr. Jones also became something of an amateur naturalist.  It was his family’s hobby of collecting birds nests in the wild that led to the creation of the Nests and Eggs of the Birds of Ohio.[2]See Smithsonian website about this family project here; also see Joy M. Kiser, America’s Other Audubon (New York, Princeton Architectural Press, 2012). 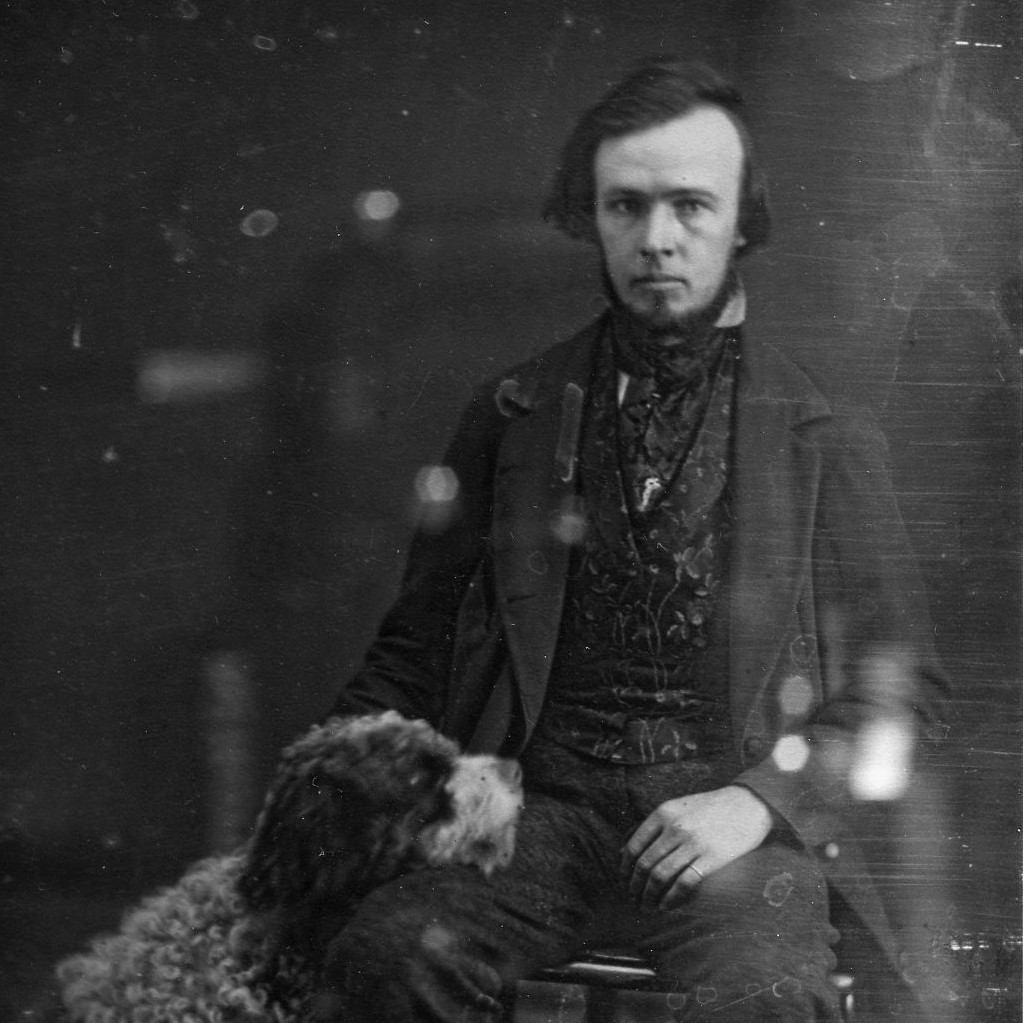 We see echoes of Dr. Jones’ fascination with wilderness in many of his descendants.  My siblings and I all attended a wilderness canoe camp in Northern Minnesota in our teenage years, which involved voyageur-like expeditions into Quetico Provincial Park, Canada, and points even farther north.  Several nephews did the same thing in the 1990s-2000s.  Most notably, my nephew Thanasi has become a world-class wilderness hiker.  He’s worked at the South Pole, hiked the Patagonia Mountains in Tierra del Fuego, lived in Kenya amongst tribesmen, and bicycled across Russia and Central Asia.  I suspect he inherited Dr. Jones’s sense of adventure and love of wild nature.