Our road trip this summer to the Red River Valley in northwestern Minnesota was a tremendous success.  We added 3 Norwegian ancestors to our family tree!

Background:  Our Bonn ancestry is based upon a connection to the village of Bøn, located in Eidsvoll Municipality, Akershus County, Norway, and to several farms in the vicinity that use Bøn in their names (e.g., Bøn, Bønsmoen, Bønsdalen, Sondre Bøn) .  We are not 100% sure which farm they resided on prior to immigration, although the Bønsmoen farm is the leading candidate.  Some in the family used the spelling Bohn and some Bonn after they immigrated, and some used both at different times.  Occasionally, we find it spelled Boen.  (When I assign a particular spelling to one of these family members, it is because they used that spelling the most.)

Ole Larsen Bohn (1820-1902) is the earliest-generation Bonn/Bøn ancestor to immigrate to America.  Four of his children – Laura, Bernt, Christ, and Ole – are known to have immigrated as well, although not at the same time, while two daughters remained in Norway, and one daughter died as a teenager.  Bernt Olsen Bonn (1856-1937), the oldest son and my great grandfather, was the first to immigrate: 1876.  After three years, he abandoned his homestead in the vicinity of Madison, Minnesota (reportedly due to “ill health”), and moved 30 miles or so to the town of Montevideo, Minnesota, where he remained until his death in 1937.  The rest of the family all settled in Marshall County, Minnesota – in the Red River Valley, considered some of the best farmland in the world.  Christ Olsen Bonn (1858-1943) immigrated in late 1881 or early 1882, and homesteaded in Marshall County beginning 15 October 1882.[1]Application no. 7339, 12 July 1887, in Christ O. Bonn (Marshall County) homestead file, final certificate no. 4093, Crookston, Minnesota, Land Office; Land Entry Papers, 1800-1908; Records of the … Continue reading  The youngest son, Ole Olsen Bohn (1863-?) also arrived 1882.  The father, Ole Larsen Bohn, arrived in 1883 at the age of 63.   Laura Olsdatter Bohn (1853-1923) arrived in 1886 or 1887 and went to Marshall County as well.  So, the only immigrant member of the family to NOT live in the Red River Valley was Bernt, who resided 260 miles south. 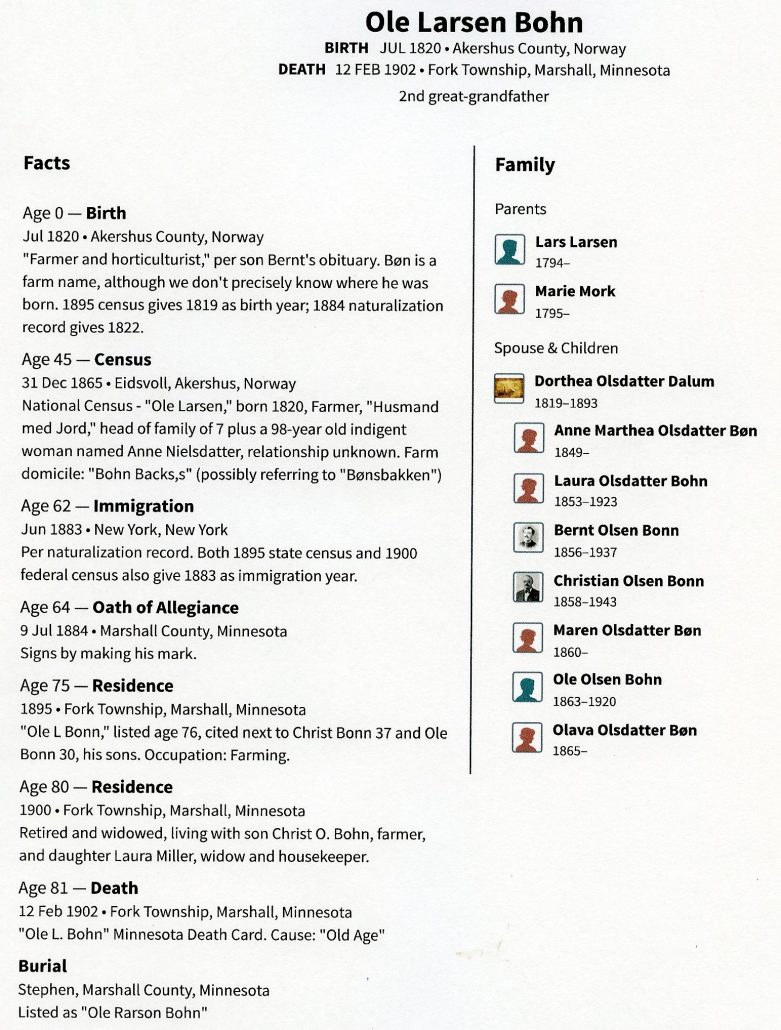 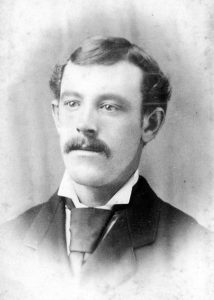 Unfortunately, we have very few photographs of this family.  The only ones we have are of brothers Bernt and Christ.  Here’s one of Bernt as a young man and one of “Uncle Christ,” probably in his 70s.  Christ (pronounced “Chris” with a “t” sound at the end) was the one member of the family that is known to have revisited Norway.  He made at least 5 sea-voyage trips back to Norway between 1906 and 1938 to visit his sisters’ families.  He never married. 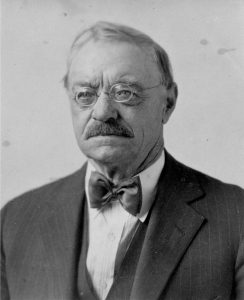 Discoveries:  According to family lore, Ole Larsen Bohn (1802-1902) was married to a woman named Dorte or Dorote.[3]Susan K. Quella & Beverly Bonn Jonnes, “Aaberge Family Tree, 1713-2001: For the Descendants of Peter/Petter Peterson Aaberge,” unpublished manuscript, 2001; loose-leaf copy privately … Continue reading  Four years ago, I was able to flesh out her full Norwegian patronymic name as Dorotea Olsdatter, based upon the family’s 1865 Norwegian census record.[4]“National Sample of the 1865 Census of Norway,” The Digital Archive (The National Archive), Norwegian Historical Data Centre (University of Tromsø), Dorotea Olsdatter in Ole Larsen … Continue reading  The assumption has been that Dorotea/Dorthea never came to America – that she died before Ole departed for America in his 60s.

Our road trip proved this wrong.  Dorthea did immigrate, and in fact, is buried with her husband in Stephen, Marshall County, Minnesota.  The Stephen Cemetery lists them as Ole Rarson Bohn and Dorthea Bohn.[5]Stephen Cemetery (Stephen, Marshall, Minnesota), 1893 plat, citing Dorthea Bohn, block 22, lot 3.  The lot lacks gravestones (viewed by author 27 June 2018).  Unfortunately, the burial stones are long gone, but the cemetery layout clearly shows the exact location where the stones should be.  It was a nice feeling to stand where they were buried and contemplate how challenging it must have been for them to come to America late in their lives.

We also obtained Dorthea’s death record from Marshall County[6]Marshall County, Minnesota, Index to Death Records, Book A, Page 31, Line 23, for Dorthea Olsdatter Bohn, 1893, transcribed by hand; Marshall County Recorder’s Office, Warren, Minnesota and the death certificate of her daughter Laura (Bohn) Miller from Polk County.[7]Polk County, Minnesota, Death Certificates, non-certified copy based on data taken from county death records, Book P, Page 4, Line 3, for Laura Berg, 1923; Polk County Recorder’s Office, … Continue reading  These two documents plus the cemetery information show that Dorthea Bohn died in Marshall County, Minnesota on 20 Sep 1893 at age 74 – about 9 years before her husband.  She probably died at their farmhouse in Fork Township right on the Red River.  (I will follow up with a blog article about the land records of this family at a future time.) 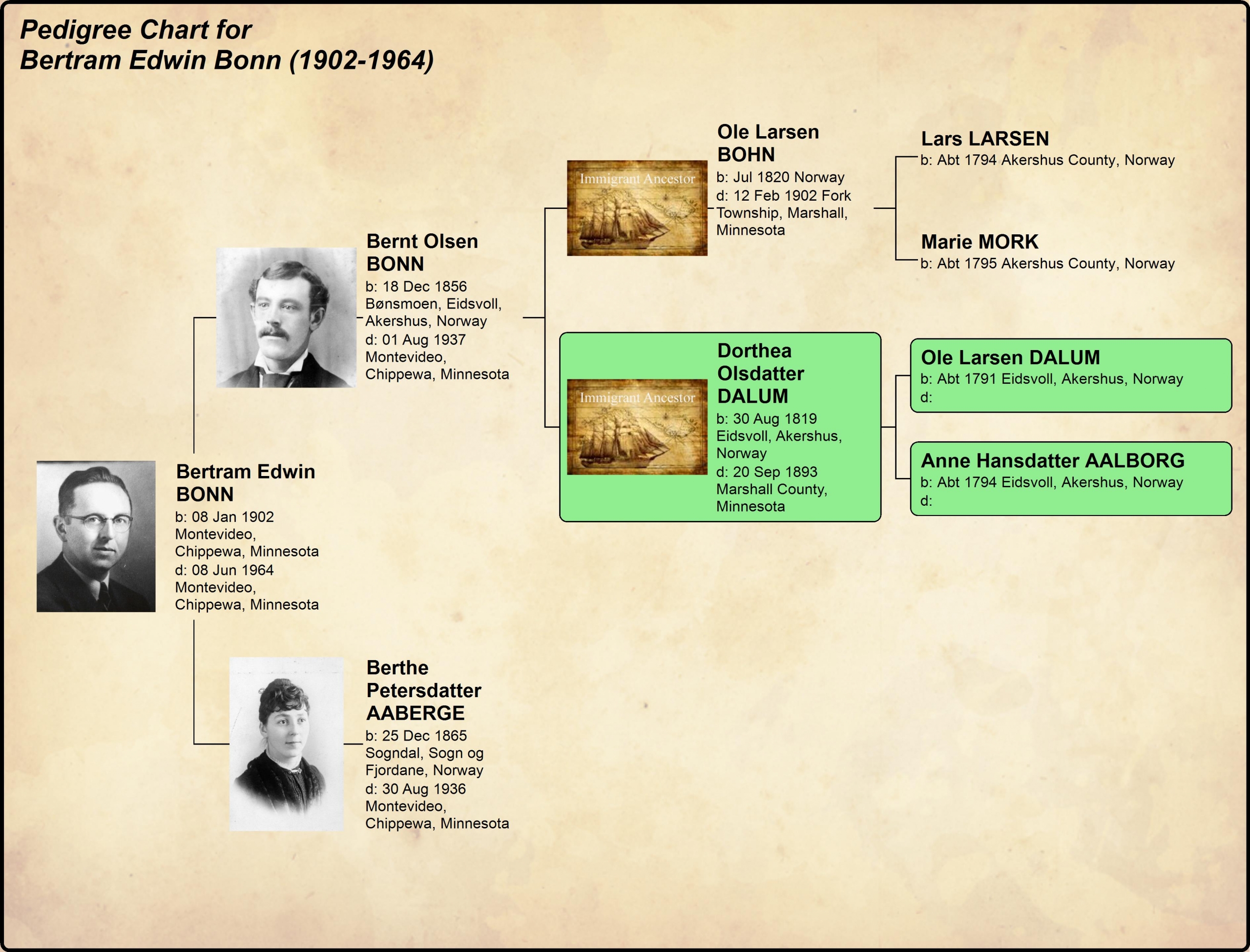 Most importantly, we discovered Dorthea’s farm name:  Dalum.  This becomes her “maiden surname,” so to speak, although Norwegians did not use traditional surnames until the late 19th and early 20 century, and she may never have used this name other than to identify where she was from.  Nonetheless, the farm name really helps us to locate her more specifically and conduct additional research about families that would have lived at that domicile.  And … sure enough, there is a Dalum farm about three miles outside of the village of Bøn.  She is now fully identified at birth as Dorthea Olsdatter Dalum (1819-1893), who married a man from Bøn and became Dorthea Bohn upon immigration to America.

In addition, Dorthea’s death record identifies her parents as Ole Larsen and Anne Alborg.[8]Marshall Co., Minnesota, Index to Death Records, A, 31, 23, 1893 entry for Dorthea Olsdatter Bohn.  Her mother apparently was from a farm close to Bøn and Dalum called Aalborg.  Aalborg is another mile up the road from Dalum.  When you look at the pedigree chart above, you can see the 3 new ancestors highlighted in green.  The convention in Norwegian genealogy is to use the farm name as the surname prior to the adoption of true surnames.

(At some point, I really need to create a map that will show the key farms and ancestral locations around Bøn and post it in a separate article.)

Of all the lines in my mother’s tree, the Bonn/Bøn line has always been the one we knew the least about.  This year’s road trip helped us make significant progress in growing this branch and I am very optimistic that future genealogical research along with DNA matching will result in even more progress.  However, we may be stymied by the loss of many parish records when Eidsvoll Church was partially burned by fire in 1883. 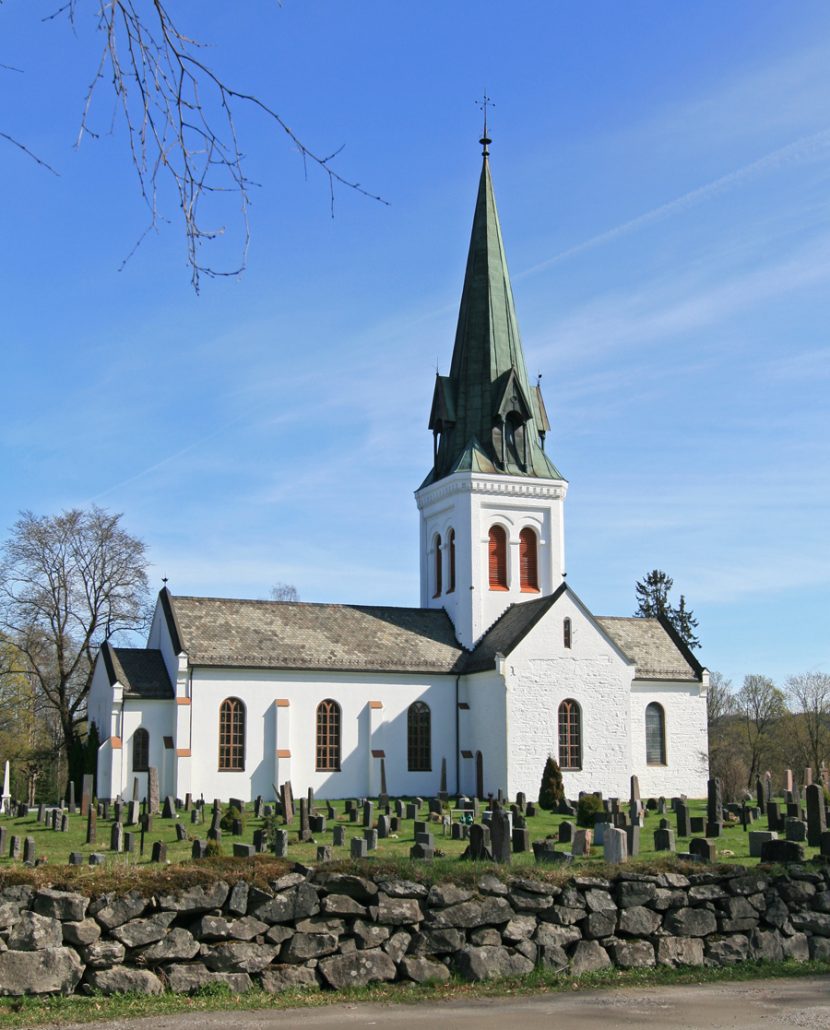 Eidsvoll Church, originally built with stone about 800 years ago

Next research steps:  1)  Identify Bonn/Bøn cousins through DNA matching and communicate with them to compare records;  2) Conduct online research at Norway’s Digital Archive site and elsewhere focused on the Dalum and Aalborg farms.

Do I hear a siren song calling us to visit Norway?