In going through my Mother’s file boxes and papers, my brother came across a carton of stuff left by her uncle Jack Bonn (1896-1985).  Jack was an interesting character whom I will write more about in the future.  Growing up, I always heard that he had been a World War I flying ace and shot down two German planes.  (The story was that he never got credit for his “kills” because he didn’t have two independent witnesses.)   He became a barnstormer and experimental parachutist after the war, traveled the world, and had many friends in Hollywood in the 1930s and 1940s.  He reportedly helped on screenplays and was a ghost writer for famous authors.  However, there is some question about whether Jack may have exaggerated some of his exploits, so I’m going to dig deeper into his history, especially his World War I service. 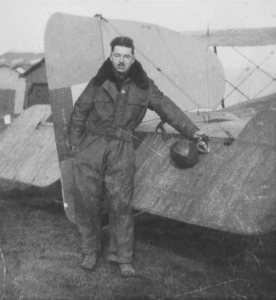 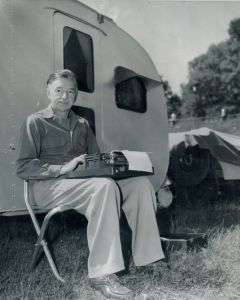 One of the items we found in Jack’s box was a Norwegian “song” written by his great-grandmother Berthe Mikkelsdatter Vikheim/Aabyrge/Lereim/Hermanson (1812-after 1880).  She is my 3GG.  It is a religious hymn composed in Norwegian by someone clearly approaching death.  There is no dating associated with the poem but we can assume it was written in the 1880s when Berthe was in her final years, probably early 1880s.

I blogged about Berthe previously here.  She was born and raised at the Vikheim Farm in Sogndal Parish, Sogn og Fjordane County, in 1812 and married three times, first to an Aabyrge and second to a Lereim.  She immigrated to America in 1866 with three of her Lereim children and married her last husband, Herman Hermanson, in Goodhue County, Minnesota in 1867.[1]Holden Lutheran Church (Kenyon, Minnesota), “U.S., Evangelical Lutheran Church of America, 1875-1940;” database online, Ancestry.com (http://www.ancestry.com : accessed 21 September … Continue reading  I still don’t know when she died but she was enumerated in the 1880 U.S. census with husband Herman in Wanamingo, Goodhue, Minnesota.[2]1880 U.S. Census, Goodhue County, Minnesota, population schedule, Wanamingo, Enumeration District 163, p. 349B, dwelling 181, house 17, Hermun Hermanson and Bertha Hermanson; digital … Continue reading

The first stanza of the hymn is displayed above, but here’s the full Norwegian language version.  It is the voice of a woman lying on her death bed as she speaks of the comforts of paradise to the loved ones gathered around her. 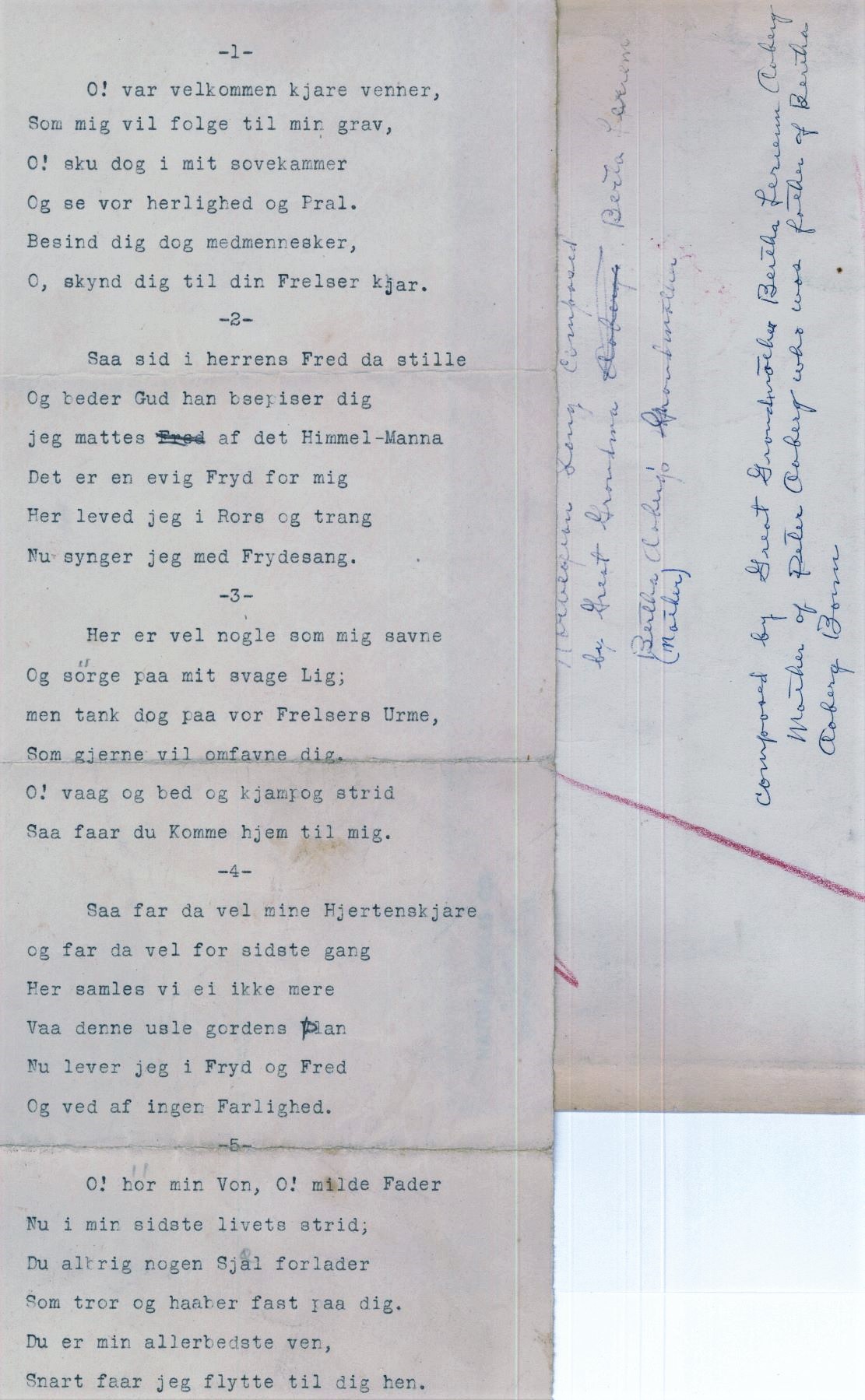 Here is our attempt to translate the poem:

Oh, be ye welcome, dear friends!
Ye who will follow me to the grave
Oh! But in my bedchamber, as I
Behold the glory and magnificence,
Mind what I say, my fellowmen,
Oh, hurry unto thy Savior dear.

Sit ye quietly in the Lord’s serenity,
And pray that He feeds you well,
For I am full with Heaven’s manna,
It is an everlasting delight for me;
I have lived in temptation and want,
But now shall I rejoice with Song.

Some, I s’pose, shall miss me,
And shed some tears over my corpse;
Please ponder on thy Savior’s Arms,
Who happily will embrace thee;
Oh! Please pray and struggle and fight,
So that you can come Home to me.

So fare thee well, my sweethearts,
I am about to say goodbye;
We will gather here together no more,
For I depart this wretched earth,
And now shall live in Joy and Peace,
And Fear will know no more.

Oh, listen friends! Oh, gentle Father!
I am in my life’s last struggle,
Thou have never abandoned a soul,
Who worshipped and longed for You;
Thou art my very best friend,
To You I soon shall be transported.

The translation is primarily by Christopher Bonn Jonnes, my brother, with a little help from yours truly and online friends in the Nordic Research Group on FamilySearch.org.  (Thank you, Charlotte Noelle Champenois!)  When Chris sent me the hymn, he had already translated it.  Previously, he had shown moderate interest in genealogy, so I was a little surprised by his interest.  Little did we know he has a secret passion for Norwegian death songs!

The translation provides a close sense of the meaning even if it doesn’t read as well as the original, which has much better rhyming.  It’s not a professional translation so any errors are mine.  There are some words in the original Norwegian that are problematic.  Vaa in stanza 4 is confusing, for example.  We suspect that Jack Bonn typed up the poem from a hand-written original which no longer exists, and in doing so, made transcription errors.  Also, there are some archaic words that are challenging.  The language is probably Landsmål, an old written form of Norwegian, but I am not an expert on Norwegian languages so I could be wrong about that.

It’s Jack Bonn’s hand-writing in the right margin that indicates it was written by Berthe.  It reads:

Intriguingly, this may not be the only poem or hymn that Berthe wrote.  I have found references in other family sources that describe her as a composer of religious hymns.  Maybe, just maybe, my Mom inherited some of her poetry acumen from Bertha!

It also raises the question whether any of what are described as hymns or songs were ever put to music.  Berthe was a member of Holden Lutheran Church in Kenyon, Minnesota, well-known in Minnesota Lutheran history.  Its pastor for 40 years, Rev. Bernt Julius Muus, was the founder of St. Olaf College.  Holden is still an active church and possibly has records that may shed light on Berthe’s time as a parishioner beyond what I can find online.