My son Peter gave me a book for Christmas that I really enjoyed – They Knew They Were Pilgrims: Plymouth Colony and the Contest for American Liberty.  It’s a new history of Plymouth Colony by John G. Turner, a professor of religion at George Mason University.  It was published last year in commemoration of the 400-year anniversary of the Mayflower landing.  I thought it was excellent.  I had previously read William Bradford’s Of Plimouth Plantation as well as other histories, but Turner’s book was the most readable and intimate account.  I came away with a much deeper understanding of the personalities, lifestyles, and religious concerns of our Plymouth forefathers. 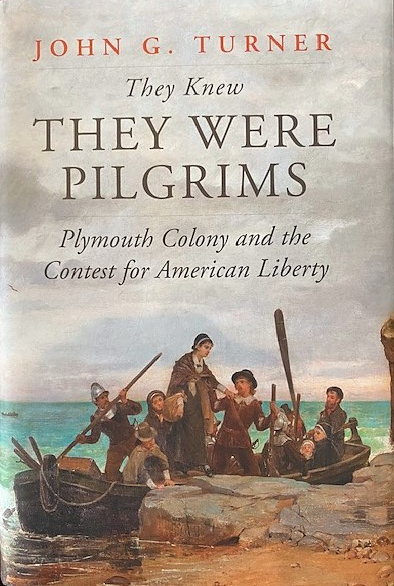 In a nutshell, Plymouth Colony was established after the Mayflower landed in Cape Cod Bay in December 1620.  When the ship left England, 102 souls were aboard, but nearly half died in the first three months of arrival – a time of unspeakable hardship and suffering.  (In addition, there was a ship’s crew of 30 led by Mayflower captain Christopher Jones.)  The Pilgrims were Protestant Separatists, considered radicals by the Church of England, and had been living as refugees in Leiden, Netherlands for over a decade under the leadership of pastor John Robinson (1576-1625).  Due to the fragility of their charter, which was never properly addressed, Plymouth failed to secure a new charter from the King of England, and was absorbed by Massachusetts Bay Colony in 1691.

The key leaders of the colony for the first few decades were William Bradford (1589-1657), governor for 31 years, William Brewster (1566-1644), spiritual leader, Myles Standish (1584-1656), military leader, and Edward Winslow (1595-1655), assistant governor in most years and envoy to London investors and the royal government.  John Robinson, unfortunately, died in 1625 in Leiden and never made it to America.  Significantly, none of the Mayflower passengers were aristocrats.

I noticed that several ancestors were mentioned in Turner’s book, including John Howland and Obadiah Holmes.  That prompted me to go back and review my Plymouth roots.  I’ve been so focused the past several years on more recent genealogical puzzles that I’ve neglected these earlier immigrants in my tree.

My Father’s earliest American ancestry emanates primarily from West Jersey and Connecticut; my Mother’s primarily goes back to New Amsterdam, northern New Jersey, and Massachusetts, especially western Massachusetts.  But both have Plymouth ancestors, 20 in total – seven on my Father’s side and 13 on my Mother’s.  Four were on the Mayflower.  The 20 are either 8GG or 9GG to me on my father’s side or 10GG or 11GG on my mother’s.[1]I have not submitted any of these to the Mayflower Society for lineage authentication.  I believe they are genuine ancestors, but there is always a chance an error has been made.  I am leaving out … Continue reading

It may surprise the reader but Plymouth research remains an active field today.  You would think that what we know or don’t know about these individuals from four centuries ago had been settled, but efforts to deconflict and analyze sources continue.  In particular, the Great Migration Study Project, led by Robert Charles Anderson, has been working since 1988 to document all of the 20,000 or so immigrants to New England between 1620 and 1640.  (See their link here.)

To repeat, the list focuses only on those Plymouth Colony ancestors who were immigrants, not their offspring born in the New World.  For each of the 20, I assign the Plymouth township in which they resided. 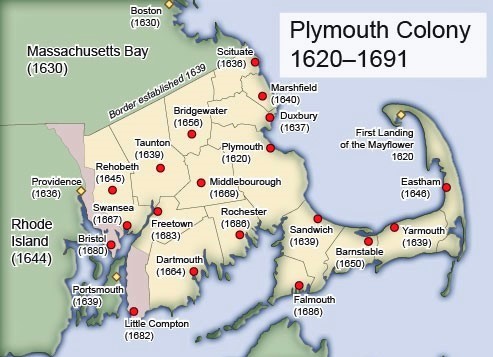 It’s important to distinguish what type of settler each immigrant was.  While many were escaping religious persecution, others arrived for more secular reasons.  The Mayflower pilgrims themselves labeled the two groups, the Saints and the Strangers.  Of the original 102 settlers, for example, only 41 were actually Separatists affiliated with the Robinson congregation.  The majority were there because they had a useful skill or were indentured servants or merchants.

Also, legal standing among the men was divided between those who had achieved Freeman status or not.  A Freeman was a voting citizen of his township.  Social standing was divided between those who were addressed as mister or goodman.  Leading officials, clergy, magistrates, militia officers, etc. were allowed to be called Mister Smith as opposed to Goodman Smith, for instance.

Let’s start with my Mom’s side since she has the Mayflower connection.  All 13 of her Plymouth immigrant ancestors may be found in one small twig of my Mead family (Vermilyea ancestry).  3GG Fanny Mead (1821-1897) had a set of great-grandparents named Caleb Hazen (1720-1777) and Sarah Hamblin (1720-1814).  Most of the Hazen genealogy goes back to Massachusetts Bay Colony.  The Hamblin genealogy, on the other hand, goes back almost exclusively to Plymouth Colony.[2]Caleb Hazen and Sarah Hamblin have been authenticated as 5th-generation Mayflower descendants.

My father’s Plymouth immigrant ancestors may be found in three branches of his tree.  The first four may be found in the ancestry of 3GG Anson Smith (1795-1891).  It was my father who actually discovered Nehemiah Smith during his research.  Obadiah Holmes is an ancestor of 4GG Lydia Harden (1786-1860) – Lukemire ancestry.  Eglin Hatherly and her son Thomas Handford are ancestors of 4GG Sgt. William Brown (1761-1804) – Matthews ancestry.

As more of my ancestry is filled in, I am sure additional Plymouth ancestors will be discovered.