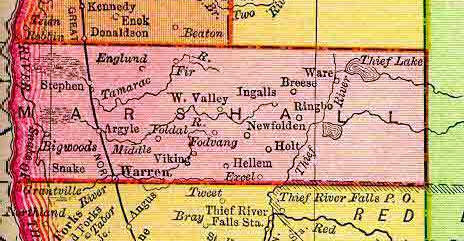 Talk about solving a mystery fast!

Last week, I outlined some of the new information revealed by the homestead file of my 2nd great-uncle Christ O. Bonn (1858-1943).[1]Christ O. Bonn, (Marshall County) homestead file, final certificate no. 4093, Crookston, Minnesota, Land Office; Land Entry Papers, 1800-1908; Records of the Bureau of Land Management, Record Group … Continue reading  I mentioned my disappointment that we didn’t learn anything from the file regarding the whereabouts of Christ’s parents and siblings after their arrival from Norway in the 1880s.  According to his testimony, Uncle Christ was single and living alone during his 5-year homestead claim period (1882-1887).  I had trouble understanding that because we knew brother Ole immigrated in 1882, parents Ole & Dorthea in 1883, and sister Laura in 1886, and I had assumed they would have all been living together.

Well, after I posted the article, I started to do a little digging on Bernard “Bennie” Nelson, the neighbor of Christ’s who knew him from childhood in Norway.  I began with Minnesota state census records.  Minnesota conducted a number of census enumerations between 1849 and 1905; after statehood was granted in 1858, they occurred every 10 years in the years ending in the number 5 (1865, 1875, 1885, 1895, 1905).

I didn’t find Bennie in the 1895 or 1905 censuses, but did find a B. Nelson in the 1885 Minnesota state census for Marshall County, Minnesota, along with his wife Annie.  Then, scanning down the page, my eye caught another listing. 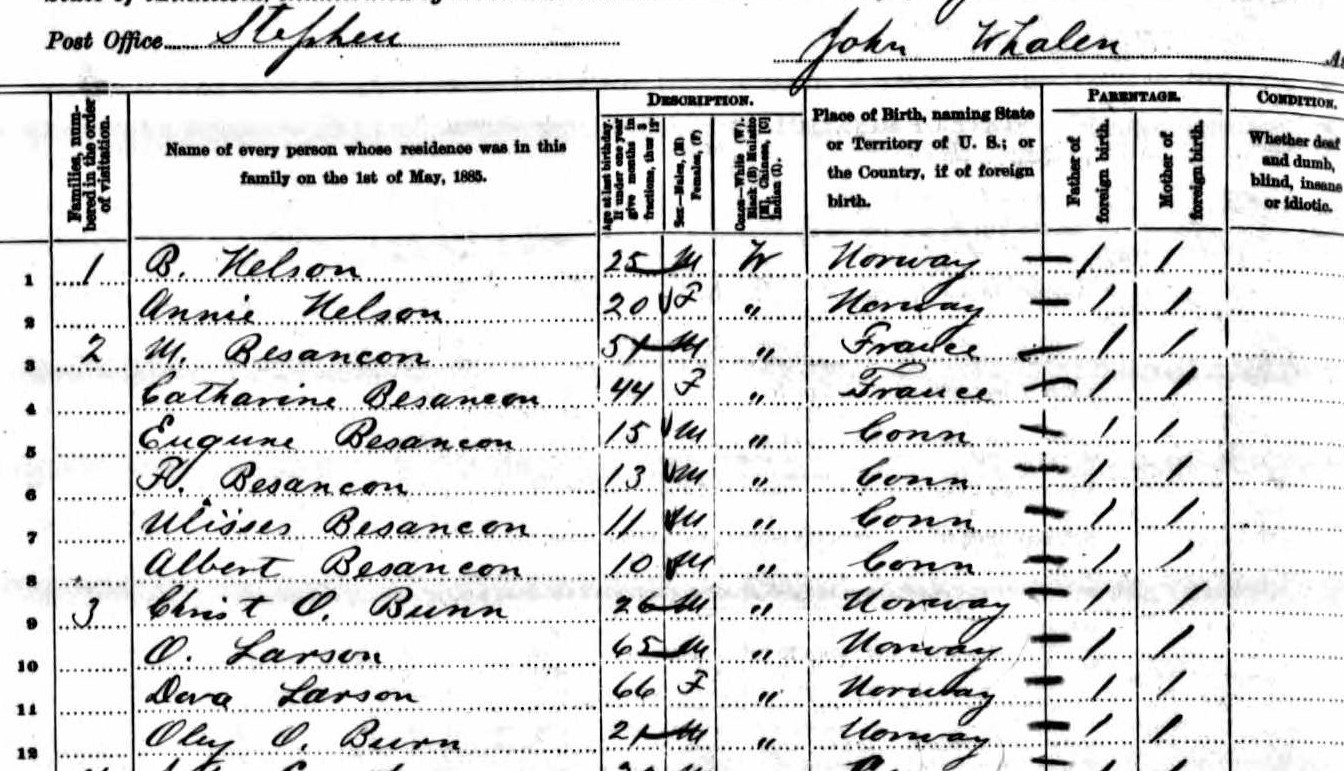 I must have missed this entry earlier because of the misspellings.  The two brothers are enumerated with the last name Bunn, not Bonn, and the parents are cited as O. Larson and Dora Larson.  Even though I’ve been actively researching this family for over two years, I’ve never seen this record before.  I went back to look at my research log from 2017, and sure enough, I did look for family members in the 1885 state census using the Bonn and Bohn spellings.  The problem was I never browsed through the original images; I only used the search engine.

The use of Larson as the surname for the parents probably reflected a habit of calling themselves by their traditional patronymic names, at least in conversation.  It is a little odd though because one year earlier, Christ’s father, Ole, had already used Bonn as his legal surname in his 1884 Oath of Allegiance to the United States.  The Marshall County population in 1885 was still very small – only 5,560 – but dominated by Norwegians and Swedes.  It is likely that Ole and Dorthea never spoke much English and communicated in Norwegian the rest of their lives.

The census enumerator may have simply wrote down the names as he heard them when he visited the household.  The enumerator in this case was a John Whalen, who based on his name alone was almost certainly not of Norwegian stock.  That might explain why Bunn not Bonn and Dora not Dorthea were the spellings.

So, if his parents and brother were living with him in 1885 as the state census indicates, why would Uncle Christ’s homestead claim not mention the family members living with him?  I went back and looked at this more closely.

Christ O. Bonn and his two witnesses (Bennie Nelson and Halvor Slang) were interviewed on 9 July 1887 by William Smith, the Register of the U.S. Land Office in Crookston, Minnesota.  On all three affidavits, the declaration is that Christ “has no family.”  The relevant excerpt from Christ’s testimony is show above.[3]Homestead Proof: Testimony of Claimant, 9 July 1887, p. 2, in Christ O. Bonn (Marshall County) homestead file, final certificate no. 4093, Crookston, Minnesota, Land Office; Land Entry Papers, … Continue reading  The handwriting belonged to William Smith.  It is likely that Uncle Christ and his two witnesses traveled down to Crookston for the day and were interviewed by Mr. Smith.

Several explanations are possible for the discrepancy.  Uncle Christ may have interpreted the questions about “family” to mean only a wife and children, of which he had none.  We have to remember he had only been in America for 7 years at this point and his English probably was still not fluent.  Another possibility is that Christ deliberately avoiding mentioning his other relations simply to reduce the amount of time answering Land Office questions.  A third possibility is that this was Land Register Smith’s modus operandi.  In other words, maybe Mr. Smith kept family questions limited to spouses and children to reduce his own red-tape.

Regardless, it seems funny to me that Uncle Christ’s homestead documentation is detailed enough to mention his pig, his cat, and his 12 chickens, but can’t quite find the space or time to mention his own parents!

Research Tip:  Genealogy research requires an unusual level of dedication to thoroughness and meticulous detail.  My story of overlooking my ancestors in a census record because of an unusual spelling is a good example.

You can’t always assume that spellings will be pristine, even with short 4-letter surnames like Bonn.  Use wild card symbols such as the asterisk (*) or question mark (?) to broaden your search.  I think most readers know that.  But my main point is that you should always consider a brute-force scan through the original pages of an enumeration for a particular locale.  It takes time, yes, but it ensures you are not missing someone who may in fact be listed when they are not showing up in your search queries.

This is especially true when dealing with ancestors who have recently arrived from a foreign country.  That very first American census record or two – whether federal, state or local – will sometimes capture alternative last names before an immigrant has settled on a final spelling.  In the example above, it is even conceivable that the entire family could have told the census taker that their last name was Larson: needless to say, that would have made the search even more difficult to capture.

Why the Whaley name was spelled differently in these censuses is unknown.  The various spellings could reflect how enumerators heard the name pronounced even though the family always pronounced it the same, or spelled it the same –  or it could reflect that the family itself changed the pronunciation or the spelling.  No matter how the difference occurred, genealogists have to attempt various search methods, including line-by-line browsing, in order to meet the Genealogical Proof Standard of “reasonably exhaustive” research.