It’s another discovery from my Mother’s cache of memorabilia.  I found a small autograph book from the 1880s belonging to my great-grandfather, Bernt Olsen Bønsmoen (1856-1937).  He was born and raised at the Bønsmoen cotter farm (husmannsplass) in Eisdvoll, Akershus, Norway and became Bernt O. Bonn upon immigration to the United States in 1875, age 18, eventually settling in Montevideo, Chippewa, Minnesota.

Autograph books have been around for centuries.  Although less popular today, they are a way for people to memorialize their feelings about friends and acquaintances, especially when parting.  Schoolchildren and college classmates used them the most.  Bernt’s album is 4 x 7 inches and covered in dark green velvet. 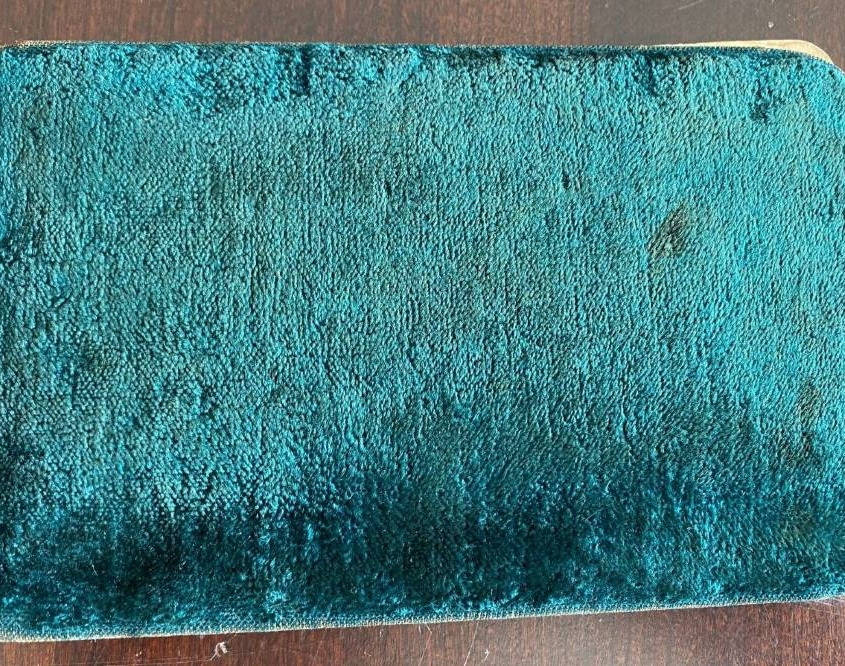 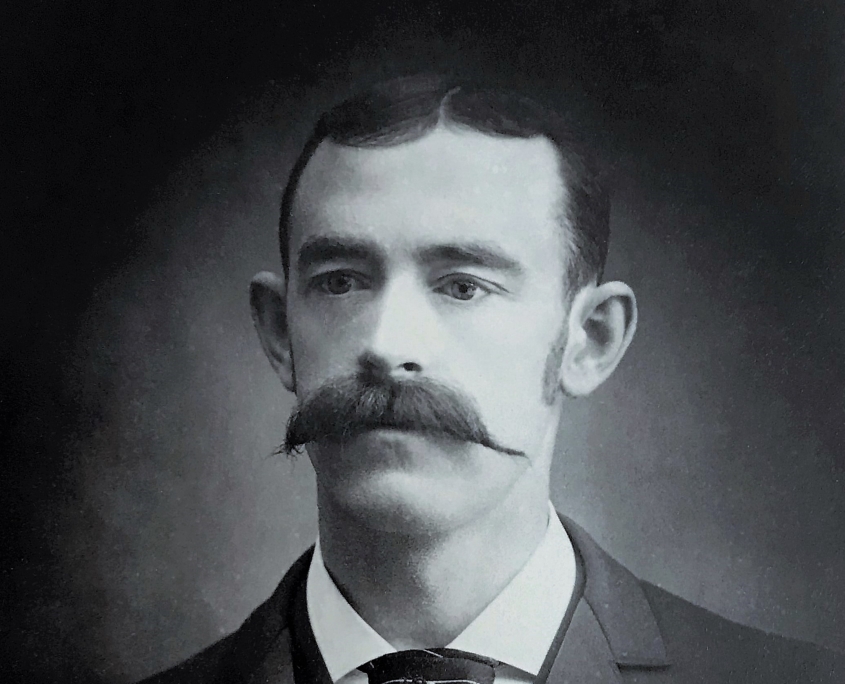 Bernt’s book has 41 entries, the vast majority of which were authored by friends in Montevideo, Minnesota.  Thirty are in English and 11 in Norwegian.  Many wrote little ditties to express themselves.  Below is a sample page, in addition to the one at the top of the post. 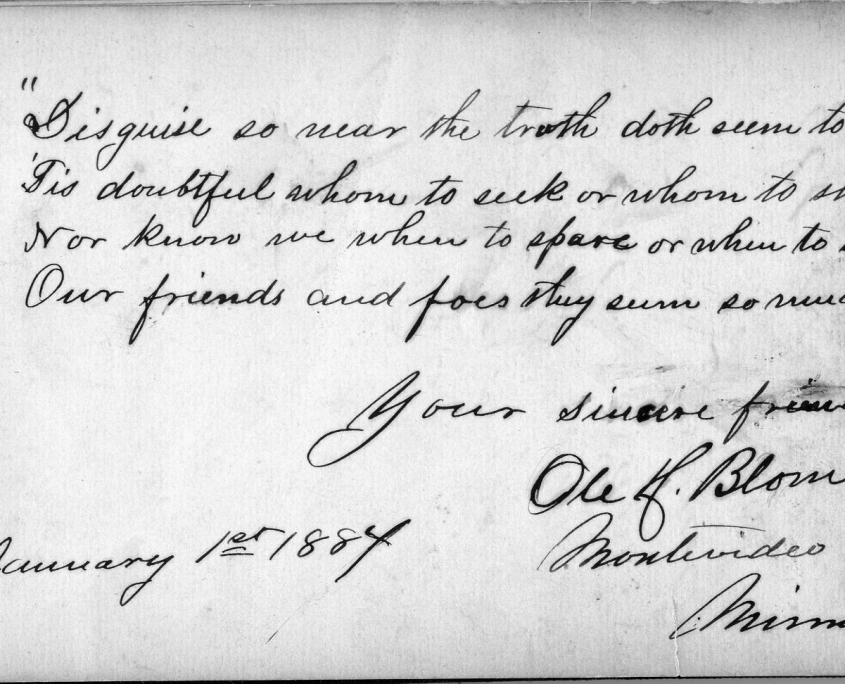 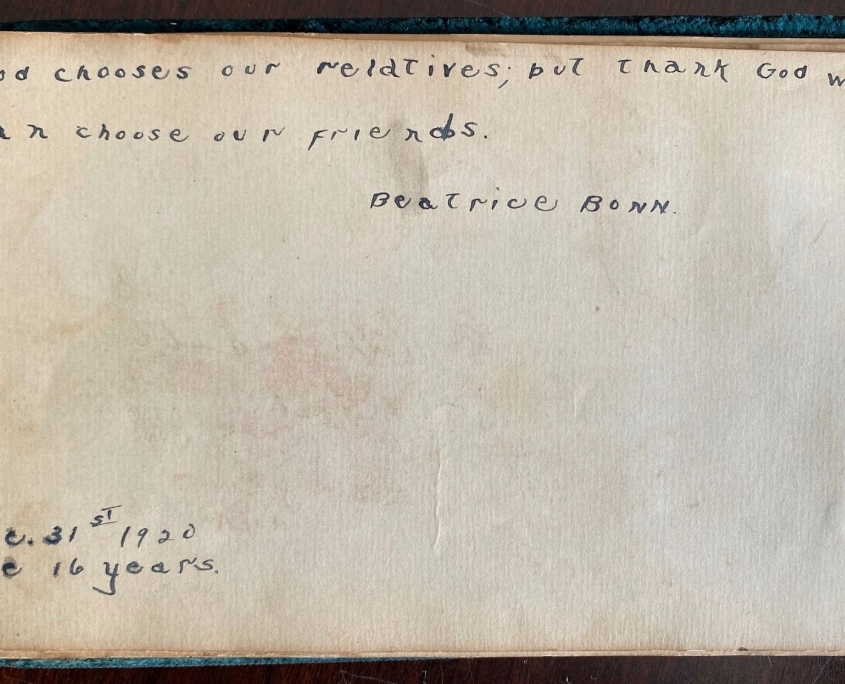 In addition, there is a newspaper clipping dated 1929 taped to the inside front cover, probably placed there by Bernt himself or one of his children. 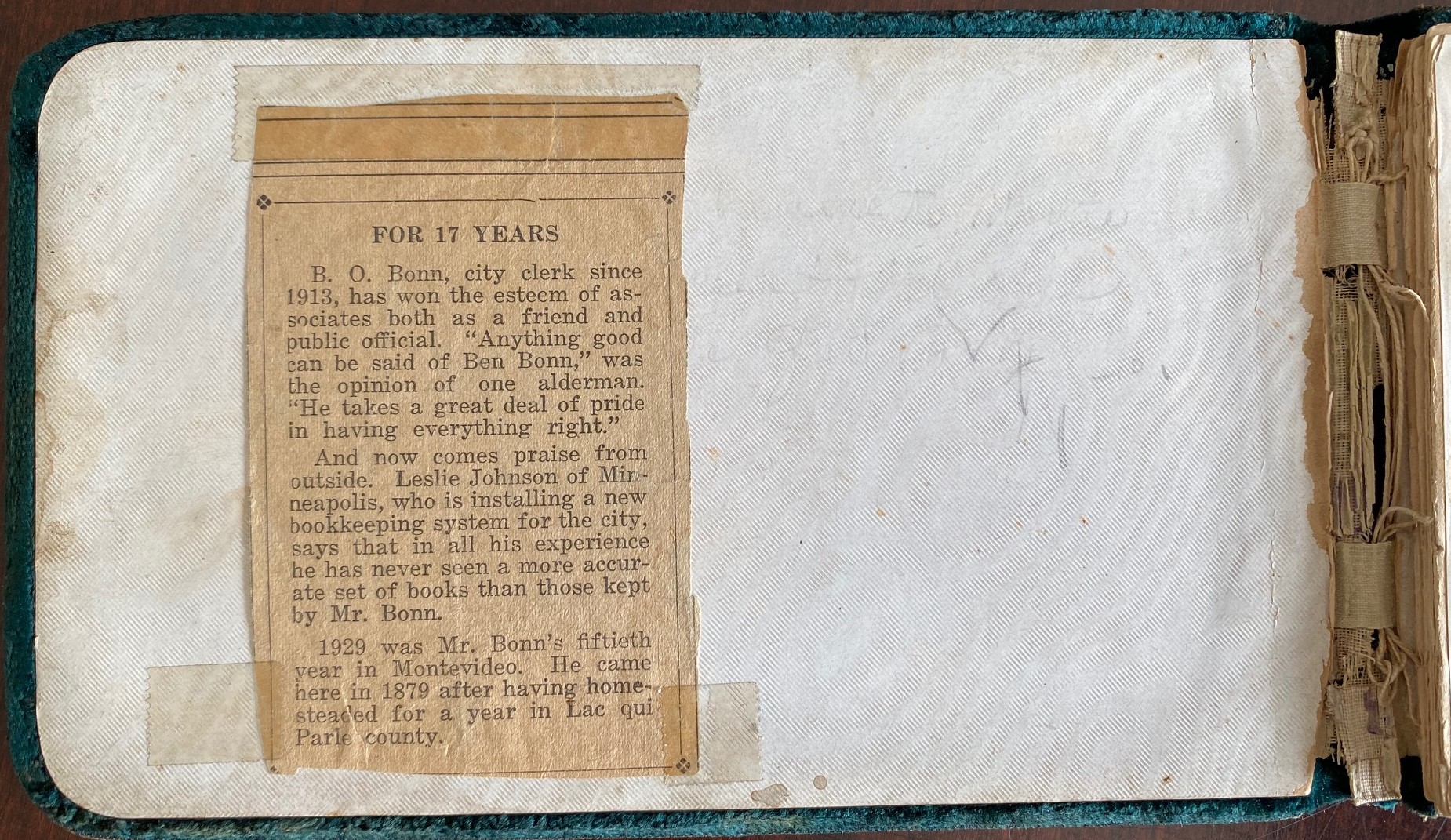 When I first found the book, I glanced through it quickly and decided it didn’t have any useful genealogical information (other than what was in the newspaper clipping).  So I put it aside for a month.  Then, recently, I wanted to store it safely, and double-checked to make sure I wasn’t missing something.  That’s when I realized there was more there than I thought.

What got my attention was a Norwegian-language entry citing Eidsvold as the location!

Eidsvoll Municipality in Akershus County (changed in 2020 to Viken County) was Bernt’s home district.  Unless Bernt shipped the book to Norway for people to sign, which seems far-fetched, these autographs were obtained by him in person.

That got me excited and I wondered if information in the messages might explain Bernt’s trip or give clues to family history.  I decided to translate a few.  I’m glad I did because it turns out that 7 Norwegian-language entries were signed outside the United States: 5 in Norway, 1 in Liverpool, and 1 on the Atlantic Ocean.

Summary of Autograph Entries Outside U.S.A.

The upshot of these autographs is that Bernt must have returned to his homeland in 1886 and 1887.  At first I thought Bernt took two trips, one in 1886 and one in 1887.  But now I wonder if it was just one trip and he stayed in Norway for 12 or 13 months.  This is supported by the fact that the album has no Montevideo autographs between September 1886 and May 1887.

By 1886, Bernt O. Bonn was 29 years old and had already been in the United States for 11 years.  His parents and most of his siblings had immigrated by then, too.  (The only family members to not emigrate were two sisters, Maren and Olava.)  Bernt was still a bachelor and most likely had not yet met his future wife Bertha Aaberge.

This is the first time I’ve heard that my great-grandfather ever returned to his homeland.  The current generation is aware of only two Bonn family members who visited Norway (prior to the 21st century, anyway): 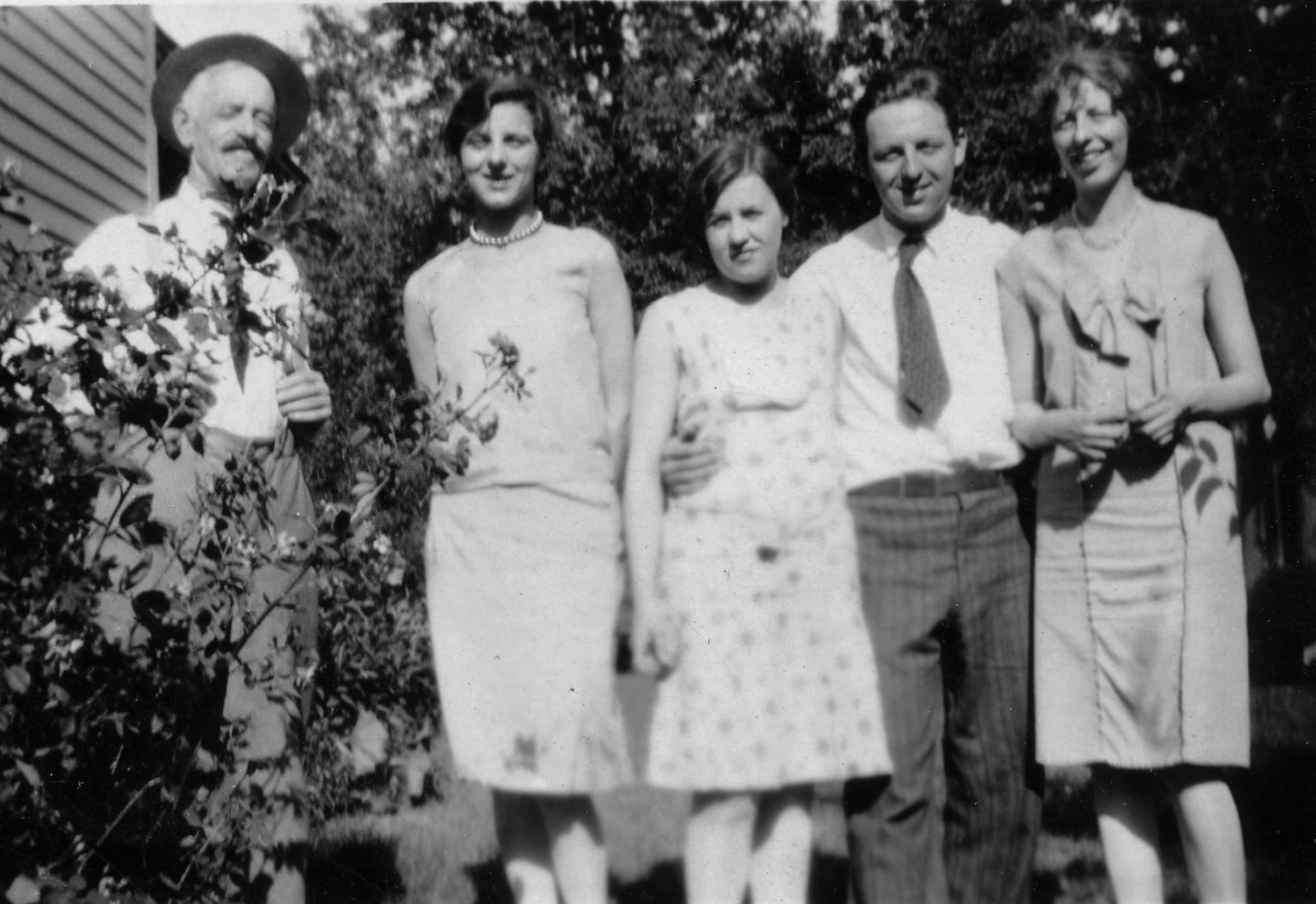 Is it a coincidence that Bernt was in Norway on 11 July 1886, as we’ve now discovered, only 17 days after Laura’s departure from Norway?  I doubt it.  Bernt probably travelled back to Norway at least partly to assist his sister in arranging emigration.  In fact, it appears Bernt departed Minnesota for Norway in late April 1886. There are several autographs in the album dated 17 and 18 April 1886 in Montevideo that suggest an imminent departure, including one in English by Magnus D. Hervig which ends with the postscript:

I wish you a happy journey, many pleasant hours, as you journey toward the land of thy birth.

The Joh. Larsen autograph on 11 July 1886 is revealing for another reason.  It’s addressed to Dear Brother-in-law! 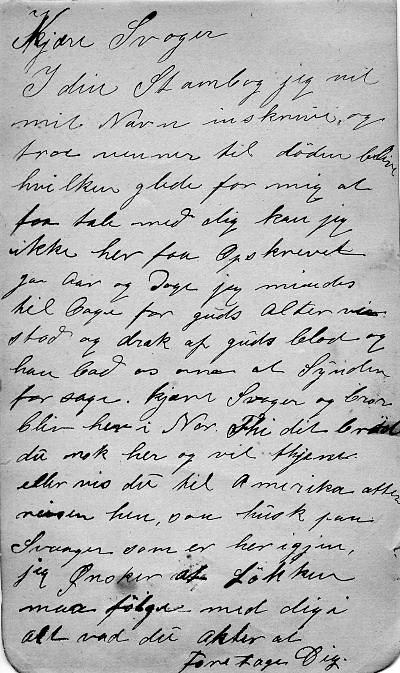 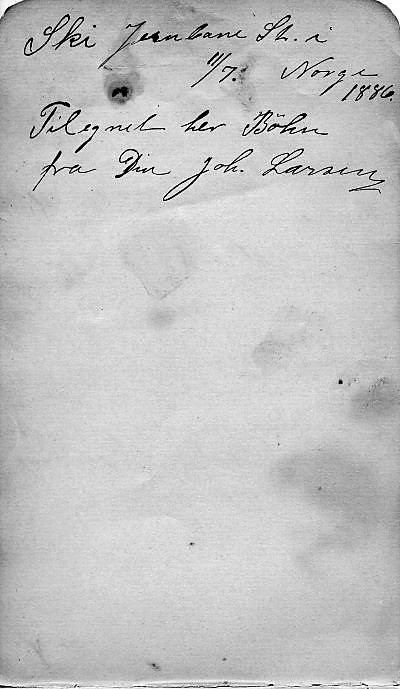 Here’s a translation:[2]Much thanks to Norwegian cousin Kari Eriksen and FamilySearch Community members Charlotte Noelle Champenois and Carole McIntyre for help with the translation.  I edited it slightly and any mistakes … Continue reading

Dear Brother in law.
I will write my name in your family tree and become faithful friends until death.
I cannot describe what a pleasure it is for me to get in touch with you.
I remember years and days ago we stood before the altar of God and drank of the blood of God and he asked us to forsake our sins.
Dear brother-in-law and brother, stay here in Norway to earn your bread. Otherwise if you are traveling to America again, remember your brother-in-law who is left here.
I want happiness to accompany you in everything you intend to do.
Ski railway station 11 July, Norway 1886.
Dedicated to Mr Bøhn
From your Joh. Larsen.

So who is Joh. Larsen?

He is the husband of Bernt’s younger sister Maren.  He was born Ole Johan Larsen at the Dønnum farm in Eidsvoll, but went by Johan rather than Ole.  He and Maren’s marriage in April 1883 is documented in Eidsvoll parish records.[3]Eidsvold Parish, Church Book nr. SAO/A-10888/F/Fa/L0003, Ministerialbok nr. I 3, 1882-1895 (0237P), marriages, p. 5, entry 7, Johan Larsen and Maren Olsd., 18 April 1883; digital image, … Continue reading  The two witnesses were Maren’s father Ole L. Bøhnsmoen and maternal uncle Hans O. Aalborg.  Her parents, my 2GGs, emigrated to America one month after the wedding, as we’ve discussed before (here).

One of the genealogical mysteries surrounding this family is the fate of the two sisters Maren and Olava.  According to family lore, Uncle Christ used to visit niece Dagmar in the city of Moss on his trips to Norway.[4]Susan K. Quella & Beverly Bonn Jonnes, “Aaberge Family Tree, 1713-2001: For the Descendants of Peter/Petter Peterson Aaberge (Attachment 3),” unpublished manuscript, 2001; loose-leaf copy … Continue reading  She was Olava’s daughter.  But, other than finding Maren’s wedding record, I have not been able to determine what happened to either Maren or Olava.

Thus, this autograph from Bernt’s brother-in-law is a great lead.  It gives us a brand new location for research: Ski, Norway, over 50 miles south of Bøn.  I am interested in this because I presume that descendants of Maren or Olava still live in Norway and it would be wonderful to find them and establish contact.  I will report on Johan & Maren in a subsequent post.

In addition to the brother-in-law connection, Bernt and Johan were childhood acquaintances and may have been buddies.  Although Johan is a year older than Bernt, both received Lutheran Confirmation on the same day in 1870 at Eidsvoll Church.[5]Akershus Kirkebøker SAO/A-10888/G/Ga/L0002, Eidsvoll Parish: nr. I 2, 1866-1871, confirmations (1870), p. 131, Ole Hansen, line 14; Bernt, line 34; digital image: Digitalarkivet.no … Continue reading  That might explain the reference to taking communion together.

None of the other overseas autograph entries are as useful, nor as long, as Johan Larsen’s, but the dates and locations still tell us much.

The second 1886 autograph is by a woman named Fredrikke.  Again, the location is Ski, Norway.  Fredrikke‘s identity is unknown and there’s nothing in the message that clues us into how she and Bernt knew each other.  She’s pretty effusive in her praise of Bernt (let this letter tell you how dear you are to us all), so I wonder if there might have been a romantic angle there.

After a gap of 8 months, three more entries suddenly appear on the same day: 17 May 1887.  Two cite Eidsvold Wærk and one cites Eidsvold.  Eidsvoll Verk is a village in Eidsvoll Municipality not far from the Bøn farm.  Eidsvoll is the capital of its eponymous municipality.  Bernt clearly was visiting his hometown and meeting old acquaintances.

Good luck on your continued journey across the ocean.

Bernt must have been leaving Eidsvoll that day, or the next.  He likely took the train from Bøn Station (built in 1884) to Christiania to get on a ship headed home.  The next entry on 25 May, 8 days later by Maren Andvord, was written in Liverpool, so the timing is perfect.  Many ships bound from Norway to America often stopped in British or Irish ports.

Thanks for the short but pleasant acquaintance!

Finally, there is an autograph dated 3 June 1887 on the Atlantic Ocean by Charlotte Schjermann, someone he made friends with on the ship.

Thank you for being such an enjoyable travel companion.

It suddenly occurred to me that there might be a record of Bernt’s departure in the Oslo Police District emigration database.  I checked, and wow, there he is:

The ship carried Bernt across the North Sea to Hull, England, where he would have traveled by rail across England to Liverpool.  Bernt stayed in Liverpool at least 2 days because the Maren Andvord autograph is dated 25 May while the ship left 27 May.  He then took passage on the S.S. Polynesian, arriving in Quebec, Canada, on 5 June 1887.[7]Canadian Passenger Lists, 1865-1935,” database online, Ancestry.com (http://www.ancestry.com : accessed 6 November 2020), entry for Bernt Bon, age 29, arrived Quebec, Canada, 5 June 1887 on the … Continue reading

I assume that Maren Andvord and Charlotte Schjermann were strangers whom he befriended on the voyage home and probably of little consequence to our research.  The three autographs on 17 May, however, bear further scrutiny.  Hopefully I can determine who they are and how they may be associated with Bernt.  Jens Larsen is particularly intriguing.  Based on his patronymic, he could be an uncle or great-uncle. [8]Bernt’s father was Ole Larsen, so any brothers of his would share the Larsen patronymic.  Likewise, Bernt’s grandfather was Lars Larsen, so his brothers would also share the Larsen … Continue reading

I am surprised that Bernt stayed in Norway an entire year, as the evidence seems to suggest.  Possibly he was considering moving back permanently.  His brother-in-law certainly encouraged him to do so.  Another thought is that he might have been looking for a wife.

Solved! The Fate of Maren Olsdatter Bønsmoen
Scroll to top