In December, I posted about the Norwegian roots of a friend’s great-grandmother.  See it here.  In the post, I was able to identify my classmate’s ancestor as Marit Andersdatter Tredahl (1864-1928), born at the Skrøen under Trædal Farm in Sunndal, Møre og Romsdal, Norway.  Marit immigrated to America in 1883 and lived in Cavalier County, North Dakota, becoming Mrs. Marit Berger upon marriage.

My post listed 10 digital Norwegian records that helped confirm Marit’s identity.  Eight of the 10 were parish records from the local Lutheran church.  See the image at the top of this post showing Hof Church today.  This was built in 1887, so Marit’s family would have attended service at the previous structure before it was damaged by strong winds.

Subsequently, I learned that one of the 10 records was NOT related to Marit.  So I need to correct the record.  The issue is with her immigration record.  In my article, I stated that Marit immigrated to America on the S.S. Heimdal in June 1883.

1883 Passenger List:  Marit Dahl, age 20, arrived in NYC on the ship Heimdal on 29 June 1883.  The ship left Kristiansund, a small port city in Møre og Romsdal, and also berthed in Copenhagen, Denmark before proceeding to America.  Marit was processed through Castle Garden Immigration Station; Ellis Island did not open up until 1892.

However, this is not our Marit!  Friends on the Norwegian Genealogy Facebook group, especially Kåre Kjøllesdal, pointed this out.  Dahl was the American surname adopted by Marit and her siblings after they immigrated to the U.S. and I just assumed this record referred to our girl.  But the Marit Dahl listed here was not from Sunndal, but rather Rendalen.

Fortunately, I think we found the correct emigration record.  Our Marit also left Norway for America in June 1883, but traveled on a different ship, the S.S. Thingvalla.  She arrived in New York City on 21 June 1883 via Copenhagen.  She is listed on the ship manifest as Marit Trammal, age 18.  The handwriting is not great.  The English transcription actually spells the name Trimnal, but either way it’s a bastardization of Trædal, the Norwegian spelling for Tredal/Tredahl.

In addition, I have new information about Marit’s heritage.  I previously identified her parents as Anders Johnsen Tredahl (1817-1883) and Sigrid Johannesdatter Vollen (1822-1885).  After a little more digging, I found Marit’s grandparents too!

Her paternal grandparents were John Iversen Tredahl and Sigrid Larsdatter.  This is based on two records related to their son, Anders Johnsen.  The first record is his baptism at Hof Parish Church on 29 Jun 1817.[1]Hof Klokkerbøker – Møre og Romsdal, 590/L1008: Ministerialbok nr. 590A02, 1794-1820, births & baptisms (1817), s. 75, item 25, Anders; digital image, Digitalarkivet.no, … Continue reading  It’s a little hard to read but it shows a child (barn) named Anders, son of Joen Iversen and his wife Segrie.  There were also some witnesses to the ceremony listed (e.g., Gabriel Mette).  It doesn’t give a birthday but Anders typically would have been born in the previous 2 to 4 months – so saying that he was born in 1817 is almost certainly accurate.

The local farm history book (bygdebøk), by the way, claims that Sigrid’s patronymic is Andersdatter not Larsdatter, so that needs to be deconflicted, but I think Larsdatter is right. 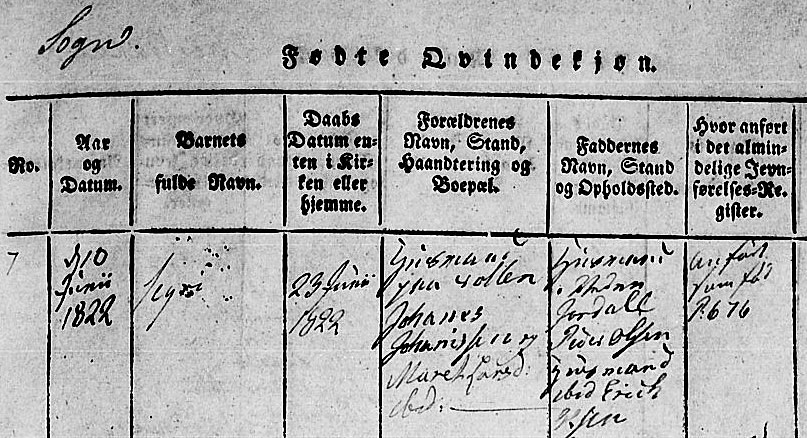 It is also based on Sigrid’s confirmation record at Hof Church on 11 Jun 1837.  The record lists Sigrid Johansdatter Vollen, age 15, daughter of Johans Johanssen and Marith Larsd.[4]Hof Klokkerbøker – Møre og Romsdal, 590/L1012, Hof Parish: nr. 590A04, 1832-1846, confirmations (1837), s. 109, item 10; https://media.digitalarkivet.no/view/2292/14634/9 : accessed 24 … Continue reading  The local bygdebøk also mentions that Sigrid was the daughter of a cotter named Johannes Johannessen Vollen and adds that Johannes resided at the Jordalsgrenda Farm.  That’s about 10 miles up the fjord from Tredal.  Vollen was probably the name of his cotters place.

Because the two confirmation records list the farm names involved, that really helps to pinpoint where the families were located on those dates.  Anders, for example, is shown residing at the Tredal Farm in 1834; Sigrid is shown residing at the Vollen Farm in 1837.  This coincides with the information from their 1849 marriage record and confirms we are talking about the same couple.[5]Sunndal Ministerialbok nr. 590A05, 1847-1877, marriages (1849), s. 258, Anders Johnson Skrøen and Sigrid Johannesdatter Vollen, 13 June 1849; digital image, Digitalarkivet.no, … Continue reading  Therefore, the family’s association with those two farms now goes back to 1834 and 1837, respectively.

Indeed, in Anders’ case, it goes back even farther.  The local farm history book (bygdebøk) states that John Iversen, Marit’s grandfather, was the first man to hold a cotters place at Skrøen under Trædal and that his residence there started in 1823.   In other words, the family’s residence at the Tredal Farm spanned at least 60 years (1823-1883).

One last tidbit.  Marit Andersdatter Tredahl, my classmate’s great grandmother, had at least one brother who did not immigrate to the U.S.: Iver Anderssen Tredahl (1853-1933).  I was curious about him because I wondered if he had any children.  If he did, that could mean that my friend has cousins in Norway today.  Iver was not enumerated with the family in the national 1865 census  even though he would have been 12 years old.[6]1865 Norway census, 1563P Sunndal Clerical District, population schedule, Hof Parish, Farm 94, p. 72, Anders Johnsen Skrøen household; digital image, Digitalarkivet.no … Continue reading  That’s a little odd.  He assumed the permanent surname Volden as an adult, so may have gone to live with his maternal grandparents at Vollen as a boy.  He became Iver Andersen Volden and had two daughters, Johanna Volden (1890-1964) and Helga Volden (1895-1985) and one son, Olaf Volden (1893-?).  There were living not in Sunndal, but at the Nedre Jordal Farm, just to the north.  So it is likely that my friend has descendants from one or more of these children who are her cousins.  They would be in the range of 3rd cousins.