The Minnesota Genealogist just published a short item in their Autumn 2018 issue about the spelling of my surname: Jonnes.  We were always one-N Joneses going back to the 17th century.  Indeed, our original patrilineal immigrant ancestor was John Jones (1670?-1727) from northern Wales.  The change to two Ns began with my grandfather Dr. Lloyd Jonnes (1890-1952).  The featured image above shows Lloyd as a teenager with his brother and sisters around 1907.  Lloyd is the one in the middle.

Although all our ancestors spelled Jones with one N, my family spells it differently: Jonnes with two Ns.  Two-N Jonneses are very few in number – only 18 today, the offspring of Dr. Lloyd Jonnes (1890-1952) of Circleville, Ohio.

We are asked about our surname almost daily.  My mother’s favorite story happened some 50 years ago in a Montgomery Ward store, where the girl behind the counter asked my mother, “Are you sure that’s how you spell your name?”

How did Jones become Jonnes?  The only tangible bit of proof is a 19th-century silver bowl inscribed to “Mrs. Jonnes.”  Family legend says that around 1905 when Lloyd Jones was an adolescent, he got into an argument with his father at the dinner table about the spelling of Jonnes on the bowl.  Nelson Jonnes reported, [Lloyd] challenged his father, Howard, as to “why no one in the family had the guts to spell the name [it is] supposed to be spelled – with two Ns.”  After considerable discussion during which Howard explained their ancestors were all one-N Joneses, he finally said, “Well, if you want to spell your name with two Ns, go right ahead.”  And so he did.

We don’t know why the bowl has the two-N spelling.  Our best guess is that it was an engraver’s error, which many years later triggered the febrile imagination of a disputatious teenager to change his name. 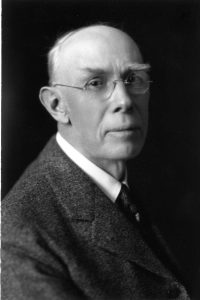 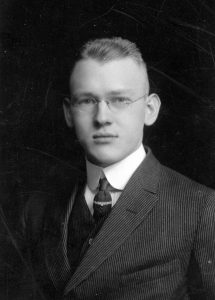 Our family still has the silver fruit bowl, but no one knows its provenance.  My father, who understood some metallurgy, examined it closely many years ago and determined it is made of copper with silver electroplating.  Electroplating only became popular in the 1840s and 1850s, so the bowl cannot be older than that.

As to whom the bowl might be referring, I studied the various females in the 19th-century Jones family and came up with the following possibilities:

Just speculating aloud, but of these choices, I think Mrs. Rachel Jones (1796-1893) is the best candidate.  After the death of her husband, Henry Jones (1791-1871), she moved to Nodaway County, Nebraska along with many other Jones cousins.  This was around 1880.  Possibly she gave the silver bowl to her son Dr. Nelson E. Jones – or her grandson Howard Jones – before she made the big move.

The other possibility that sticks out is Mrs. Virginia Jones.  She came from a family with money, so maybe the bowl was a gift from someone in her family who got the name wrong.  Virginia died in May 1906, which is close in time to the supposed year when the dinner argument between Lloyd and his father Howard occurred.  Could the argument have occurred after her death, like the summer of 1906, when her grandson Lloyd was still emotional about her passing, and he made the argument because it represented his allegiance to her and not his father?