This discovery is actually a couple years old, but I wanted to document it here.  I also have an important new lead to discuss.  It is a nice example of discovering new ancestors whom you never knew about before.  For our family, that’s pretty rare at this point.  It’s a breakthrough related to my 3GG Mary Hamilton Tabele (1795-1869) on my father’s side.

Background:   Mary Hamilton Tabele was a Philadelphia girl who married Robert McMullin, Jr. (1787-1862) in 1829.  Robert was a prominent lumber merchant and member of Old Pine St. Presbyterian Church in Philadelphia.  My sister Sara and I in 2012 visited the house they built at 411 Pine St. in Philadelphia, a registered historic building.

There were three sons of this union, all of whom attended Princeton Theological Seminary and became Presbyterian ministers. 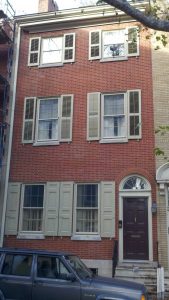 The oldest son, Rev. Samuel Hildeburn McMullin D.D. (1831-1892) was my 2GG.  He never stayed very long in any one job, probably due to his caustic personality.  According to my great aunt Eleanor, he had the habit of “ridiculing parishioners from the pulpit” during Sunday sermons![1]Nelson Jonnes, “Jonnes Family Record 1995,” 3rd edition, unpublished manuscript, p. 17; bound copy #6 privately held by Steven Nelson Jonnes, Ashburn, Virginia, 2018.  The longest he ever stayed anywhere was nine years as the pastor of the First Presbyterian Church in Circleville, Ohio (1873-1882).  That’s where his daughter, Mary J. McMullin (1858-1951), met and married my great-grandfather Dr. Howard Jones (1853-1945).

The story of the middle son is very tragic.  Missionary Robert McMullin III, (1832-1857) was a victim of the infamous Cawnpore massacre in 1857 during the Sepoy rebellion in India – along with his young bride, Sarah Colt Pierson (1828-1857).[2]“Philadelphia Missionaries Slain in India,” Philadelphia Inquirer, 17 October 1857, vol. LVII, issue 93, p. 1.  The youngest son was Rev. Charles Tabele McMullin (1839-1915), who was a Presbyterian minister in Absecon, New Jersey for a number of years but whose 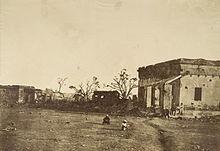 Cawnpore Hospital in aftermath of 1857 Massacre

preaching was cut short by chronic laryngitis.  He ended up serving in a number of administrative capacities for the Presbyterian Board of Education in Philadelphia.

My father studied Mary Hamilton Tabele for decades and could never make any headway on her parentage.  Partly what intrigued him was the fact that his own father, Dr. Lloyd Jonnes (1890-1952), had a brother named Tabele who died as an infant.  (Tabele Jones died of pneumonia in 1888, aged two months.)  What made Dad’s search difficult was that he never could verify Mary Hamilton Tabele’s birth year or place.  Her 1850 census enumeration provides an age of 55, but gives her birth location as Pennsylvania.[3]1850 U.S. Census, Philadelphia County, Pennsylvania, population schedule, Philadelphia Pine Ward, p. 307A, dwelling 450, family 548, Mary McMullen in Robt McMullen household; digital image, … Continue reading

Adding to the mystery, the Tabele surname is extremely rare.  None of the surname origin websites has any information.  There were only 3 families with that surname in 1820 U.S. census and 5 in 1920 U.S. census.

Discoveries:   The reason Dad never made any progress finding Mary Hamilton Tabele‘s parents was that she was actually from New York City, not Philadelphia.  I finally made the breakthrough from old newspaper articles and legal records, especially her grandfather’s probate file.[4]New York County, New York, Probate Proceedings, 1830-1865,  probate file of Jacob Tabele (May 1831), liber 67, pp. 400-468; Surrogate’s Court, New York, New York; digital image, Ancestry.com … Continue reading  She moved to Philadelphia when she was a teenager after the early demise of both parents.

Ultimately, the rarity of the Tabele surname is what allowed the discovery.  The only family showing up in early U.S. census records with that name were some Tabeles in Manhattan in the late 1700s and early 1800s – in particular, a long-lived gentleman named Jacob Tabele (1739-1831).

Sure enough, the Manhattan Tabeles were Mary Hamilton’s family.  The discovery is that her parents were John Tabele (1767-1810) and Phoebe Bogart (1770-1809).  Jacob Tabele was her paternal grandfather.  Jacob and his several sons (John, William, Jacob, Jr., James, Phillip, and Richard) were merchants and craftsmen who appear to have been relatively well-known and prosperous.  Son John Tabele, for example, was an election inspector in the 6th ward for the 1798 election.[5]“Inspectors,” Argus, New York, New York, 12 April 1798, p. 2, col. 2; digital image,  GenealogyBank  (https://www.genealogybank.com : accessed 13 November 2018), Newspaper Archives.  Son Phillip Tabele was editor of the American Patriot, and Public Advertiser, published from 1809 to 1813.[6]“To Mr. Phillip Tabele, Editor of the Public Advertiser,” Columbian, 15 May 1811, vol. II, issue 477, p. 2; digital image, GenealogyBank (https://www.genealogybank.com : accessed 13 … Continue reading  Mary’s connection to grandfather Jacob Tabele is confirmed by a reference to Mary H. McMullin on p. 465 of Jacob’s 1831 will papers.[7]New York, N.Y., “Probate Proceedings,” 1831, Jacob Tabele, pp. 465. She is among those listed as heirs who are commanded to appear in court on 3 May 1831 for the reading of the will.  I’ve underlined Mary’s name in red. 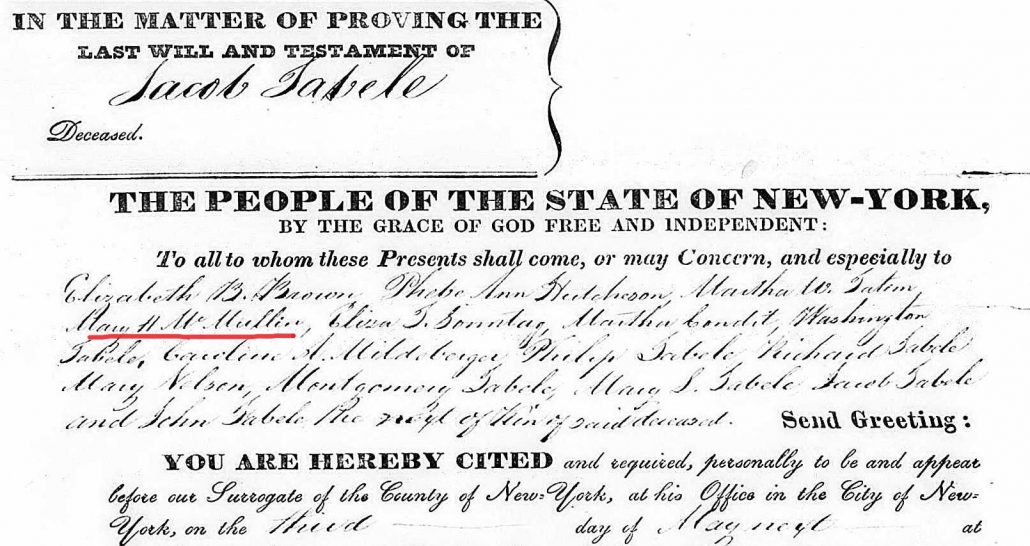 The spelling of the Tabele surname is fairly consistent for the time period, although it may also be found as Tabely, Tably, and Tabeley. I assume that Tabele was pronounced with two syllables – /’tæb.li/ – but maybe it was actually three – /’tæ.bƏ.li/ – or maybe it was pronounced like the word table.  Actually, the pronunciation could have changed over time as well as the spelling, now that I think about it.

(The Tabele line is the only New York City connection in Dad’s entire tree.  Mom’s tree, of course, has the great Vermilyea connection to Manhattan in the 17th century.)

Mary Hamilton Tabele was probably born in Manhattan and was definitely raised there.  In 1810 when she was about 15, her parents died within 4 months of each other.  Of what, we do not know.  Another yellow fever outbreak, perhaps?  Her father, John Tabele, was only 43 when he died, the mother only 38.  John was in business together with his brother William Tabele (1771-1808).  Their mercantile firm closed after William died in 1808 after a “fall from a chair.”[8]“Household Members,” New York Weekly Museum, New York, 8 August 1808, William Tabele death entry, p. 669; database online, Ancestry.com (https://www.ancestry.com : accessed 20 February … Continue reading

Some of the documentation surrounding this family relates to a court case beginning in 1819 involving several properties in lower Manhattan and the guardianship of a “lunatic” named Esther O. Bogart.[9]“In Chancery,” Evening Post, New York, New York, 18 October 1819, issue 5409, p. 4; digital image, GenealogyBank (https://www.genealogybank.com : accessed 13 January 2016), Newspaper … Continue reading  Mary H. Tabele is mentioned in the court documents, as well as sisters Martha and Phebe and a brother in Cuba.  The legalese is hard to follow so I can’t figure out the story line.  (Sounds like a good subject for a future blog article to me!)

Mary’s grandfather, Jacob Tabele, Sr., lived to be 91 years old.  He clearly had an eventful life, arriving from Germany in his youth, serving in the 1st New York Regiment during the Revolutionary War, building a successful life in Manhattan, and outliving two wives and almost all his children.  His address, at least according to an 1829 city directory, was 111 Fulton Street.[10]Catherine Hollister, compiler, Manhattan New York City Directory: 1829-1830, p. 544, “Jacob Tabele;” database online, Ancestry.com (https://ancestry.com : accessed 20 February 2016), … Continue reading  (That location currently houses an Au Bon Pain sandwich shop!)  About a year before he died, he was run over by a carriage in the street.  He was living at the end with his daughter-in-law, Mrs. Mary Tabele, widow of his son Phillip Tabele, and two grandchildren, Montgomery and Maria Louisa.  He changed his will several weeks before he died and ended up giving pretty much everything to her and the two grandchildren.  That triggered a lawsuit from the other heirs.

MyHeritage DNA Results Are In

Bønsmoen It Is!
Scroll to top