They must have really worked the logarithms this year because they’ve finally differentiated Scotland, Ireland, Wales, and England into separate regions.  Awesome!

They’ve also resolved the Scandinavian muddle from last year’s update.  I couldn’t understand, for example, why I was showing 7% Sweden and only 6% Norway.  Then I heard at a DNA course that AncestryDNA had acknowledged there was a problem with their 2019 Scandinavian estimates.  Reportedly, many people showed Swedish ancestry when there really was none, or there was far less than what they were told.

This is another reason why it is important to be cautious about ethnicity estimates.  I’m always amused by people – even relatives – who struggle to grasp the meaning of the word estimate and want to take the percentages as gospel.  The science is still evolving and the percentages one is seeing can be completely wrong.  A number of European regions are particularly difficult to differentiate, including Scandinavia, the British Isles, and Germany.

On the other hand, I feel like this year’s AncestryDNA update is a real breakthrough.  For the first time, I find myself checking the ethnicity estimates of DNA matches regularly; before, I would do it only occasionally.

I like it!  I especially like the 28% Norway result.  That is far closer to the 25% one would expect, since my maternal grandfather was wholly Norwegian.  It certainly makes more sense than the previous estimates from 2018 and 2019 of 13% and 6%, respectively – although those estimates also included Sweden, while this year’s doesn’t.  It could indicate, in fact, that I am slightly more Norwegian than average.

It’s also nice to finally see Scotland, Ireland, Wales, and England with separate percentages.  My Jonnes/Jones ancestors came from northern Wales in the late 17th century, so the 4% Wales is especially gratifying.  The range given is 0-9% so it could be even higher than 4%.  Branches other than Jones are contributing to that as well, I’m sure.

Thirdly, another 12% of the decline in the English percentage (47-12 = 35) could be due to previous difficulty divining the difference between Norway and England.  In other words, the increase in my Norway percentage could be at the expense of my English piece of the pie.

I’m not surprised that Sweden disappeared from my estimate but I am surprised by the loss of Germany.  Known German ancestors in my tree include:

In addition, 3GG Caroline S. Whaley (1831-1888) was Alsatian, which culturally and linguistically at least was German.  I’m not sure how Alsace figures into ethnicity estimates – although in AncestryDNA, the map for the England & NW Europe population actually includes an area encompassing southern Alsace and much of western Switzerland.  So my Alsatian DNA possibly is captured by my England & NW Europe region. 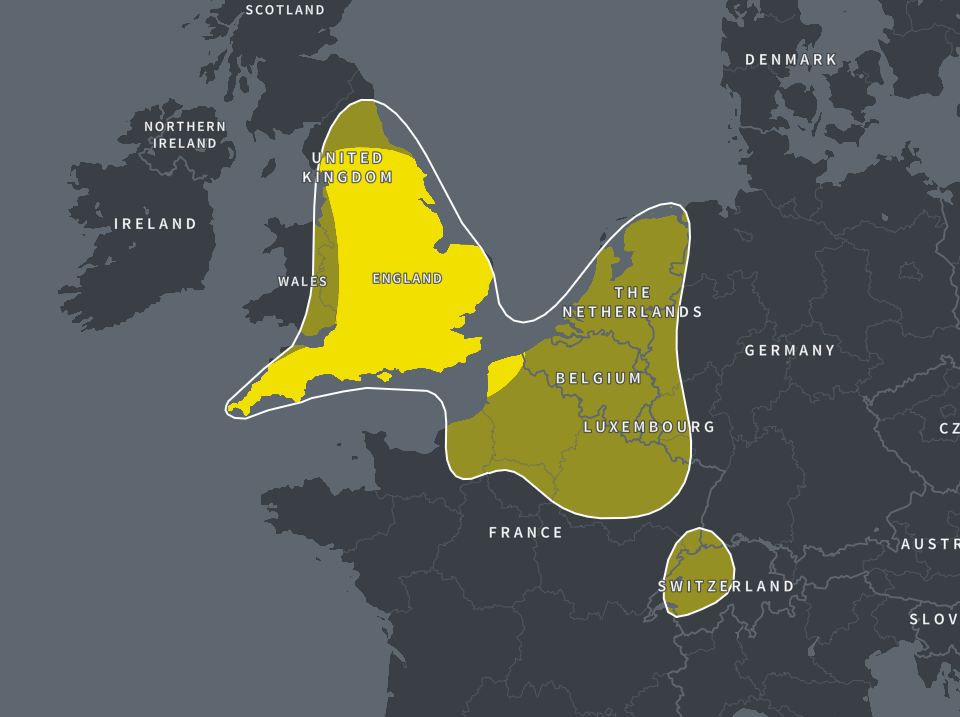 Germany remains a bit of a puzzler though, even without the Alsatian piece.  I have a number of cousins identified in AncestryDNA who are also descended from these 3 German-immigrant ancestors, so I inherited something from those lines.  Possibly one or more of these 3 ancestors was not wholly German.  Possibly I inherited less from them than from other ancestors.  Possibly AncestryDNA is still struggling to differentiate German “ethnicity” from England & NW Europe and Norway.  Maybe it’s a combination of all three.  I expect to see Germany appear in a low amount in a future upgrade.

Lastly, the 1% Benin & Togo result remained from last year.  The persistence of this result is making me believe that a West African contribution to my ethnicity could be real, even if very small.  Nonetheless, we must still be cautious with a 1% or less result because smaller segments are more likely to be misattributed. The reported range shrank from 0-3% to 0-to-2%, which reduces how recent the contribution could have been made.

My hypothesis has been that, if the Benin & Togo result is real, I would find it in my Blalock line.  I am predominately Yankee in my makeup, but I do have one southern branch in my Father’s side of the tree.  2GG Wesley Blalock (1825-1895) was born in Bowling Green, Kentucky and his likely father, William Blalock (1785-1850), was born in North or South Carolina.  In addition, the Blalock surname is historically southern.  Blalocks are first found in Virginia in the 17th century; they then migrated into North Carolina, then South Carolina, and finally points west, almost always migrating along southern latitudes.  Even as late as 1810, all 41 Blalock heads-of-household enumerated in the U.S. census resided in Virginia and North and South Carolina, except for two in Kentucky.[1]Based on a default search of the surname “Blalock” in the 1810 U.S. Census in Ancestry.com.

I checked the ethnicity estimates for a number of Blalock-connected cousins in my match list and found 14 who also own small percentages of the Benin & Togo ethnicity, including one who is specifically identified as sharing Wesley Blalock as a common DNA ancestor.[2]I checked over 100 matches.  I have many more Blalock cousins whose ethnicity estimates do not show Benin & Togo, but the fact that 14 do seems like more than coincidence.  I tried to compare this to matches who are in lines other than Blalock, but AncestryDNA does not allow searching or sorting by ethnicity, at least not yet.  In any case, my hypothesis about the Blalock line being the source of my presumed African DNA is looking stronger.